Sign in  |  Create a Rediffmail account
Rediff.com  » News » Jal Satyagraha: Fortnight later, they are yet to be heard

Jal Satyagraha: Fortnight later, they are yet to be heard 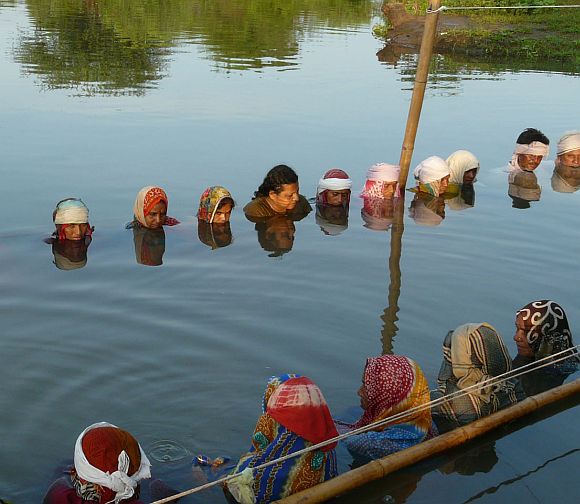 The discussion on how the best land can be acquired with least opposition from the inhabitant is not coming to an end anytime soon.

The Land Acquisition Bill, after passing through several drafts and standing committees, is now finally resting with a group of ministers.

But even when there is a law or a government rehabilitation policy, there is no guarantee it would be implemented.

The 50 men and women standing in chin-deep water in the fish-infested Narmada, near the Omkareshwar dam project, would vouch for this. 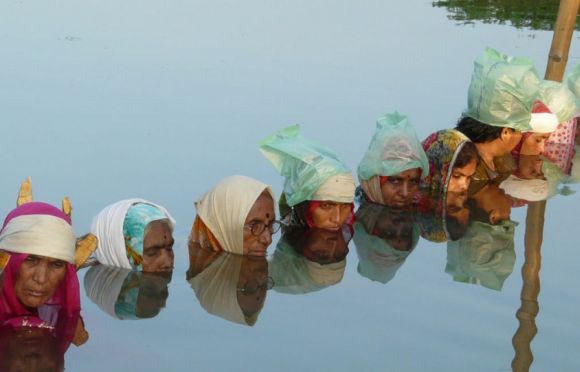 They have been forced into a jal satyagraha, or a protest till death in water, by the indifference of the Madhya Pradesh government and the Narmada Hydro Development Corporation, a subsidiary of NHPC, towards the prevailing rehabilitation policy.

It has built the dam on land taken from them, and is now producing 350 Mw of electricity and making annual profits of about Rs 600 crore.

These men and women have been standing in the cold water near their village of Gogalgaon in Khandwa district for 15 days.

The dam authorities acquired land from 2,500 villagers and built the dam by 2000.

According to the policy, they should have got land in lieu of land at least six months before the dam was built. Today, even 12 years later, they claim they have got nothing. 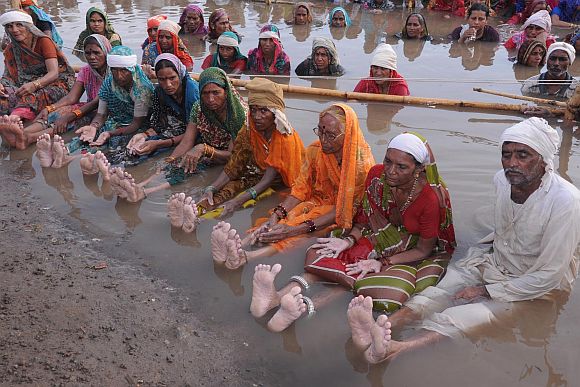 They discovered their loss only in 2005, when the Narmada Bachao Andolan activists stepped in and told them about the rehabilitation policy in the state, says Alok, one of the villagers who is part of the satyagraha.

"We were never offered any land. Instead, we got cash compensation of a few lakhs," he says.

Villagers went to the high court, which ordered five acres be given to each of the evictees.

The Supreme Court upheld this ruling last year and a grievance redressal authority (GRA) was set up to address individual cases.

The state, however, made it ineffective by not responding to it for months. 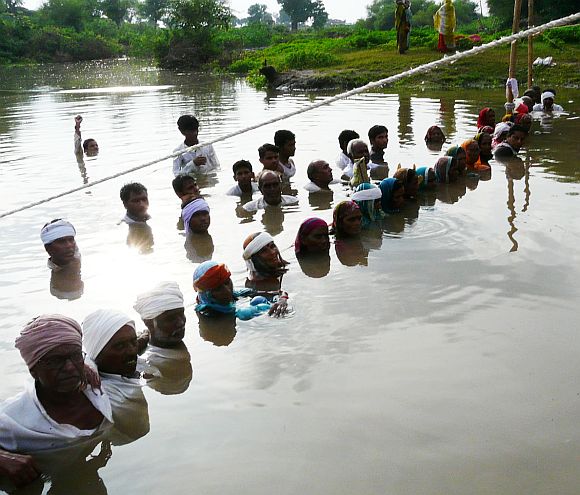 This year, there was another ruling in the case of the Indira Sagar dam, in which 25,000 evacuees were involved.

The Supreme Court said the ruling in Omkareshwar holds good in this case, too.

Chitraroopa Palit, an activist leading the protests at the Omkareshwar dam affected villages, says the state is cornered.

About 300 villagers had started protesting in Gogalgaon. So, it chose to increase the level of water to drive away the people.

"And, on August 25, it all began. We had started protesting on dry land. When we found they were trying to flush us out with water, we decided to stay put," she says.

"We asked ourselves how many of us were prepared to die. And, 50 out of the 300 villagers came forward," say Palit and Alok.

Palit, a diabetic, says her feet had begun to bleed with fish bites. 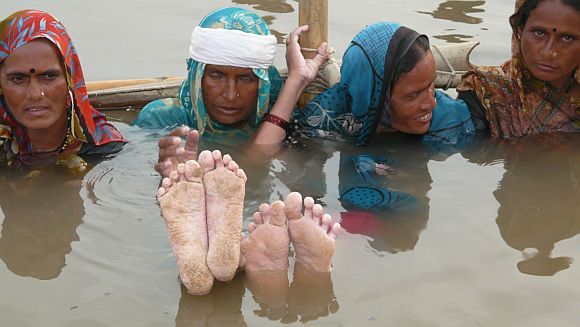 The women and men who have been standing in water since August 25 are farm workers with their skin harder than that of Palit. She says even their feet are swollen and full of sores.

The state government has been warned by the Human Rights Commission it would face punishment if even a single protestor was harmed by the flooding.

Meanwhile, a GRA has heard about the 900 petitioners and, in each case ruled that they deserved to get five acres of land which they had been denied.

The jal satyagraha as a mode of protest has been used by the Narmada protesters in the past, too. But rarely has it continued for a fortnight.

The question is why should there be any satyagraha in spite of a rehabilitation policy and a court ruling?