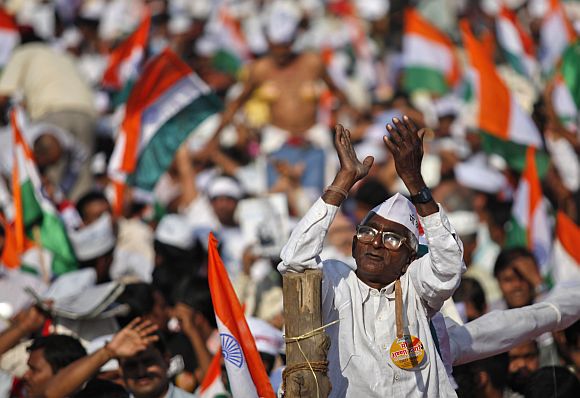 Image: A supporter of Anna Hazare gestures at the venue of his three-day fast at the Bandra-Kurla Complex grounds in Mumbai
Photographs: Reuters

After the so called flop show in Mumbai, if one thought that the Anna movement was on the wane, one needs to be careful. In fact Anna Hazare remains top recall in people's mind and irrespective of what happened in Mumbai, they still believe the Gandhian is right and his Lokpal will successfully combat corruption.

Even as Anna's Mumbai show was collapsing, this surprising result was thrown up in a 28-city survey conducted by STAR News-Nielsen after the Lokpal Bill was passed in Lok Sabha and Rajya Sabha failed to do so recently.

The survey was conducted in 28 cities across the country with a sample size of 8,902 respondents. The complete field work was carried out in the period between December 30, 2011, and January 2. 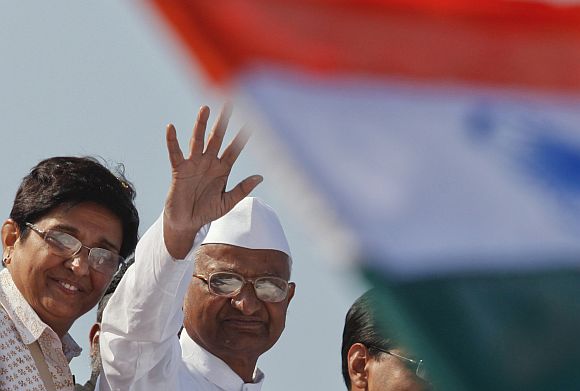 Image: Anna Hazare with Kiran Bedi wave from a vehicle during a rally in Mumbai
Photographs: Reuters

In the survey, on being asked if support for Team Anna has declined in the recent weeks, a majority 52 per cent of the respondents felt that it hasn't.

Only 42 per cent felt that there was a decline in Team Anna's support. A whopping 92 per cent of the respondents were aware of the Anna Hazare's hunger strike in Mumbai.

For the Lokpal Bill getting stalled in Rajya Sabha, 43 per cent respondents blamed all the political parties for putting the bill on hold while 30 per cent blamed only the Congress for the bill not getting through.

On being asked about Anna's threat of fast-unto-death, 71 per cent respondents supported Anna for fast until death if his demands for changes in Lokpal Bill were not met by the government. 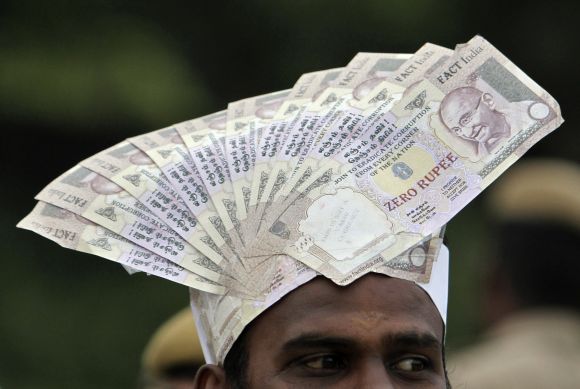 But a majority of the respondents felt that the government's Lokpal was also good. On the overall basis; 61 per cent respondents were hopeful about the bill and believed that it would become an effective law to control corruption.

When asked about the role of political parties in passing the Lokpal Bill, there was a mixed opinion amongst individuals. 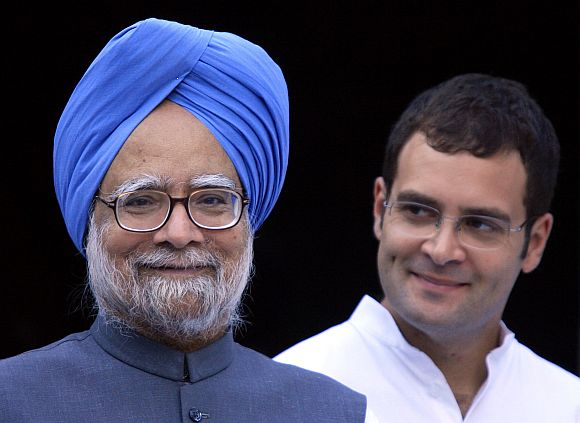 However, in a similar survey conducted in August, 2011, 39 per cent were of the opinion that Rahul Gandhi should take over as PM, but now only 35 per cent felt the same, which showed a dip of 4 per cent.

A majority 56 per cent respondents blamed the Congress for handling the recent Anna Hazare strike poorly and 57 per cent felt it was not PM Manmohan Singh, but his senior ministers who goofed up. 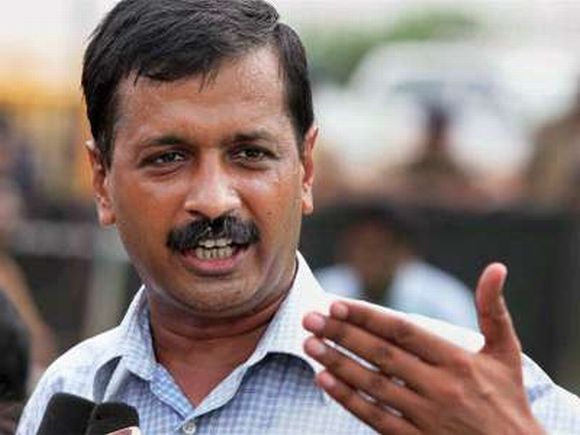 58 per cent of the respondents claimed that they will vote for prominent Team Anna member Arvind Kejriwal and about 24 per cent for Home Minister P Chidambaram.

Very interestingly, 62 per cent of the respondents felt that Kejriwal has emerged as the new youth icon in India. He had significantly higher ratings in northern parts of the country (71 per cent).

Similarly, 74 per cent of respondents felt that given a chance, they will vote for IPS officer-turned-Team Anna member Kiran Bedi over Union Telecom Minister Kapil Sibal (only 14 per cent).