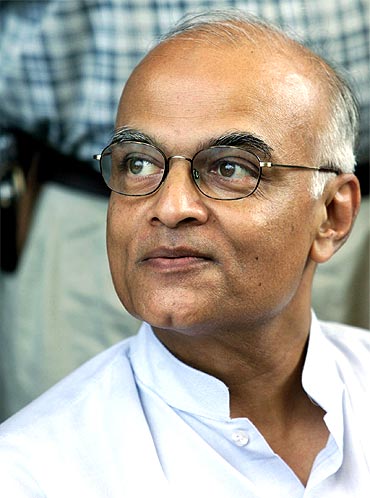 India famously clung to its aloof foreign policy for years after the end of the Cold War rendered meaningless the concept of non-alignment that it had long embraced. A career diplomat, Menon has helped break New Delhi of this habit, drawing India closer to the West.

Menon was a key player in negotiating a civilian nuclear deal with the United States, which cemented India's cooperation on non-proliferation issues with the international community. Today, as Prime Minister Dr Manmohan Singh's foreign-policy guru, he is building on that breakthrough to expand US-India ties on a wide array of issues, including efforts to fight the global economic recession, reports Foreign Policy.

In a recent visit to Washington, he reminded his audience that US exports to India have grown faster over the last five years than those to any other major trading partner. 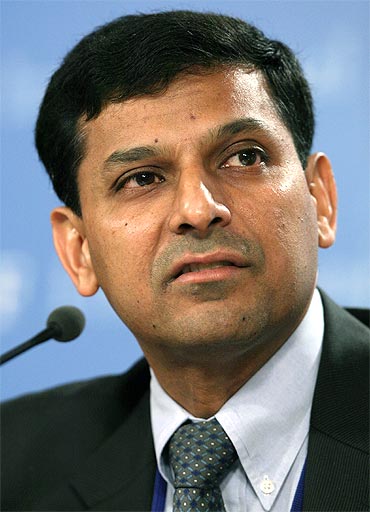 Image: Raghuram Rajan
Photographs: Tim Chong/Reuters
Raghuram Rajan is ranked 26th for his spirited debate over the roots of the global financial meltdown. He shares this position with Nobel laureate Paul Krugman.

A former International Monetary Fund chief economist and now a finance professor at the University of Chicago's Booth School of Business, Rajan has fought a running battle across the pages of a half-dozen publications over the causes of the financial crisis, according to Foreign Policy.

Rajan, author of this year's influential Fault Lines, argues that Krugman understates the role mortgage giants Fannie Mae and Freddie Mac played in the crisis because their culpability is inconvenient for Krugman's big-government liberalism. "US policies encouraged over-consumption and over-borrowing," he wrote on ForeignPolicy.com, "and unless we understand where these policies came from, we have no hope of addressing the causes of this crisis."

Kishore Mahbubani for being the voice of a new Asian century appears 92 on the list. There have been few more ardent evangelists for Asia's growing role on the world stage than Mahbubani. And with the advent of the Great Recession, the career-diplomat-cum-scholar is attracting an ever-wider audience: The collapse of the Western financial system "has accelerated the end of the era of Western domination of world history," writes this dean of Lee Kuan Yew School of Public Policy, Singapore.

He has pressed for a resolution to the long-simmering US-Chinese trade war and urged China and India to play a more prominent role in global institutions.

Fareed Zakaria, the man who chronicled the rise of the rest 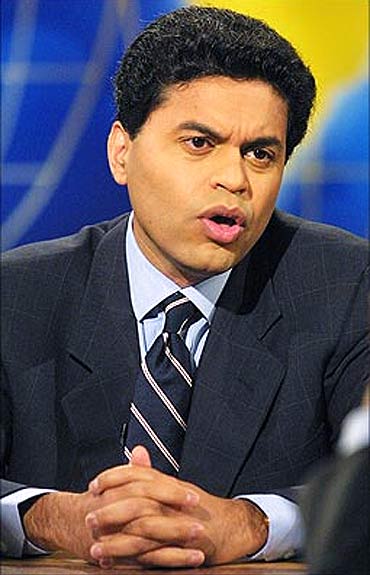 Ranked 27th, Fareed Zakaria, the editor at large of Time, New York, Zakaria's great gift to the US policy debate has been his insistence that Americans need to get over themselves -- that the future world order will be dominated by new emerging powers along with old leaders as China and India take their place at the table, writes Foreign Policy.

His predictions have proved prescient, and particularly since the publication of his timely 2008 book, The Post-American World, the Indian-born Zakaria has come to symbolise not only the rise of the rest but also a decidedly American determination to deal with it, the magazine says.

Along the way, Zakaria has turned himself into a one-man media brand, with a higher profile than perhaps any other pundit who writes about America's role in the world.

Kamal Kar for doing the world's dirty work is ranked 84th in the list drawn by Foreign Policy.

A sanitation expert from India, Kar spends much of his time thinking about something that many of us would rather not: where and how people poop.

In Bangladesh, where defecating indoors had been strictly taboo, he suggests such tactics as giving children whistles to blow whenever they see someone defecating outside -- a sort of constructive peer pressure.

And it works. After Bangladesh adopted Kar's ideas, latrine coverage skyrocketed from just 33 per cent in 2003 to more than 70 per cent today. Kar's "community-led total sanitation" method is now at work in 39 countries around the world.

Nandan Nilekani, a proof that India is democratic and efficient 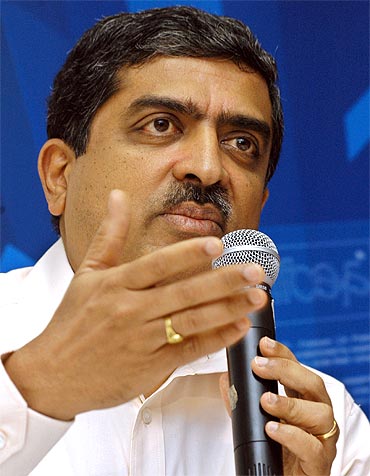 Image: Nandan Nilekani
Photographs: Jagadeesh Nv/Reuters
Nandan Nilekani appears 43rd on the list for proving that India can be not only democratic, but efficient.

Although the Indian economy is expected to continue its steady march upward, its infrastructure is still woefully inadequate. Nilekani, an engineer who played a crucial role in bringing the high-tech revolution to India by co-founding IT giant Infosys Technologies, is looking to change that, says Foreign Policy.

Nilekani's 2009 book, Imagining India, laid out an ambitious reform agenda based on twin pillars of education and private enterprise. Now he appears determined to tackle the problem head-on, leaving the private sector to chair a new government agency charged with compiling a national identification system for all Indians.

Sendhil Mullainathan makes it to the list for bringing behavioural economics out of the ivory tower. An economist at Harvard University, Mullainathan is ranks 58 on the list of top 100 global thinkers of 2010.

Until the financial crisis, Mullainathan's work was mostly focused on the developing world, particularly his native India. More recently, however, like his longtime collaborator Richard Thaler, the University of Chicago economist famous for his nudge theory of social policy, he has turned his subtle approach on the victims of the US housing crash, reports Foreign Policy. 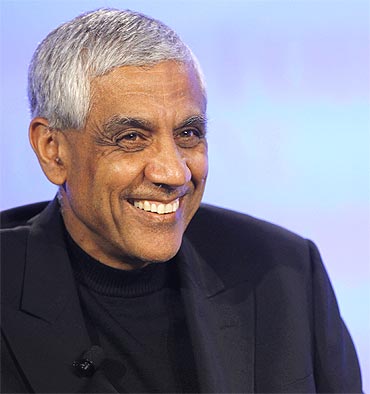 Image: Vinod Khosla
Photographs: Mario Anzuoni/Reuters
Vinod Khosla proved that green technology can be profitable.Khosla, a legendary Indian-born venture capitalist, appears 63rd of Foreign Policy's list. He became one of the richest men in America during Silicon Valley's go-go years. But now he's trying to do more than create a better laptop. He has plowed his fortune into efforts to improve the environment and alleviate global poverty. These enterprises, he argues, will not only restore the planet's health they're also good business.

Khosla's venture-capital firm has now invested more than $1 billion (Rs 4,500 crore), including hundreds of millions of his own money, into companies researching green technologies.

Atul Gawande for giving us the tools to make sense of an information-addled world. This surgeon at Brigham and Women's Hospital in Boston is ranked 72nd by Foreign Policy.

When Democratic senators were hammering out their landmark health-care reform legislation last year, United States President Barack Obama handed them copies of a New Yorker article, he had already made required reading in the White House: a careful dissection of out-of-control health-care costs written by Atul Gawande.

A practicing surgeon, medical researcher, and educator with substantial wonk bona fides -- he worked as a health-policy advisor in Bill Clinton's White House -- Gawande has been among the most eloquent proponents of one key, if unglamorous, tenet of the reform passed by Congress: that cutting health care costs will require better data and decision-making processes, reports the magazine.