'India is where the heart is' 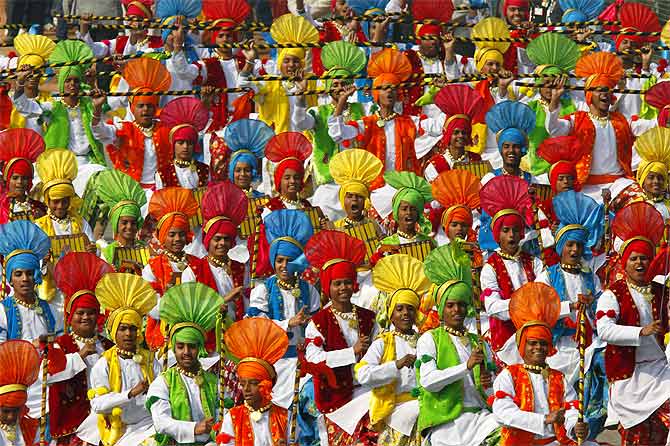 'Does India have the potential to realise its potential? I think absolutely...'

'But the most troubling part of India is that it doesn't provide equal opportunities for everybody to get a leg up... Somehow the opportunities are not there for everybody. They are for a select few, and so many of the 1.2 billion people are getting left behind,' says Swati Ramanathan, co-founder, Janaagraha Centre for Citizenship and Democracy, in a special series where various Indian tell Rediff.com what they love most about India.

India is home, and as far as I am concerned, this is where there is a clear sense of connect, belonging and value systems we have grown up with.

For me personally I have grown up with value systems that I gained from India, at a very different point in time, not the same as today, but still it is where, my heart is. So that's what appeals to me the most.

The value systems I am talking about are more of a smaller unit, of family, of community, of ethics in what's right and what's wrong, that kind of thing.

In today's crazed, market-driven set-up it is the first time we are all tasting economic empowerment, somewhere along the way it is creating this fragmentation, it is testing our values.

It is a culture of instant gratification, of not really having to work hard, not believing in hard work as a way of life... and that's nothing but just a reality of time.

The family unit is somewhat more fragmented, I don't think neighbours know each other anymore. Those are some of the ramifications of modern India, which is impacting our value systems.

For me one part of the sense of belonging, connect I spoke about was that my parents, my husband's parents are all here, so a large part of my family is here.

We loved our time in the West, we did really well, I loved the cities over there, I loved that you had so much access... so much to stimulate your mind... the museums, libraries, society itself that you chose.

I also loved the aesthetics of the cities, that you had parks for everybody, transportation systems, the garbage got picked up, all that was great about it. So it was not as if I was unhappy.

I think the thing that made us, my husband and I, realise that home was here, was in the giving back, because at some point when we looked outside of our lives, when we left India, we were like any other average immigrants out to make a good life. It was all focused on 'me'.

At one point we said we had to focus outside and think of giving back to society, that natural instinct was towards India. We all complain about India and everything that's wrong with India. And so one of the questions we kept asking was, why is it that everything works there (the United States) so well?

And somewhere along the way we realised that the mistake we make in India is thinking it is all the government's responsibility. And that's what is not true.

The big thing is the fact that in this day and age when we are seeing so much economic empowerment, so much development taking place, what doesn't appeal to me is that somehow the opportunities are not there for everybody.

They are for a select few, and so many of the 1.2 billion people are getting left behind.

When I think of my journey and going to the US, it was amazing. All that my husband and I had was our basic degrees, we made our way to the US, and just if one worked hard, by the sheer dint of determination and effort you are sure to be rewarded.

You are able to make economic progress, have a nice place, send your kids to a good school... That's not guaranteed here. A person may really work hard but all this is not guaranteed, you don't have the opportunities.

The access of opportunities is what I find most troubling about India, that we are not all having the same access.

It begins with education, livelihood, all of these areas. I don't think that entitlement is the way to go. It has to be by making sure that you give everybody an opportunity to educate themselves and there, I am very happy with entitlement.

But there the problem is about capacity and quality. What's the point of just having a tick saying I've gone to school if I really haven't had any education?

The most troubling part of India is that it doesn't provide equal opportunities for everybody to get a leg up.

We realised in the US, in the UK, in so many of the developed democracies, it was not just people within government, but people outside of government also who collectively partnered to put in place the scaffolding that allowed them to have the kind of society, have the kind of opportunities that they were able to create.

Does India have the potential to realise its potential? I think absolutely. We are an ancient civilisation, that's our strength.

But having said that, I think it's going to require generations for us to truly realise our potential. And that's the way it is, you know, societies have cyclical times and we are in one of those.

Swati Ramanathan, along with her husband Ramesh Ramanathan, is co-founder, Janaagraha Centre for Citizenship and Democracy, a non-

profit committed to transforming the quality of life in urban India.

The couple lived in the United States for many years before returning to India and getting involved with the citizens's movement at the grass-roots level. They live in Bengaluru.