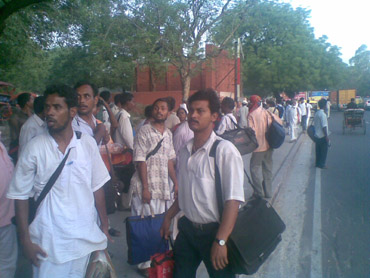 More than one armed policeman for every five unarmed, sleeping protestors. Add to that several security personnel from the Rapid Action Force and the Central Reserve Police Force. Not a fair equation, really. Sahim Salim reports from Ramleela grounds in the aftermath of the crackdown on Baba Ramdev's protest.

In an operation that lasted just over three hours, the Delhi police drove out 20,000 supporters assembled at Ramleela grounds in support of Baba Ramdev's fast against corruption.

The supporters, most of whom were from outside Delhi, didn't know where to go after they were chased away from the maidan. At the time of the police raid, they were sleeping.

They were forced out of the ground without their belongings or packed food. Some of them were even separated from their families. Strangers to the capital city, they were seen roaming around in the central and New Delhi districts of the capital.

To make matters worse, they have not been given permission to assemble at Jantar Mantar to continue their protests.

'It was a miracle there was no stampede' 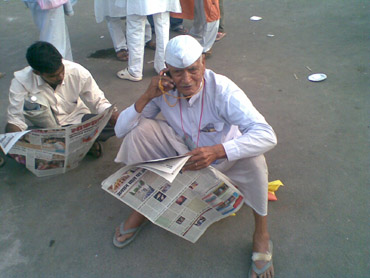 Image: Divyank Rana, one of the protestors
Photographs: Sahim Salim

The Ramleela grounds have been sealed shut by the police. The massive 2,50,000 sq ft of overhead tent has been brought down and the stage already dismantled. Inside, the place, which was buzzing with activity just hours before the police operation, resembled a battle zone.

Hoardings and placards were torn, the green mattresses showed evidence of struggle. Several of the aircoolers lay toppled on worn-out airbags left behind by their owners after they were driven away.

"It was horrible. The police just lathi-charged us. They took away our Baba. Won't we resist? We were protesting peacefully, but they lathi- charged us. They also cut the power supply. It was pitch dark and there was mayhem inside. It was a miracle that a stampede did not take place," said an elderly protestor, Divyank Rana. 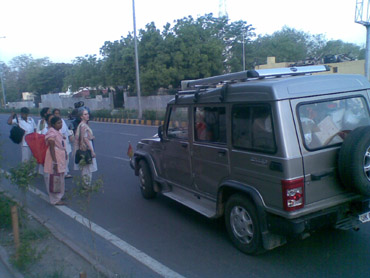 The police managed to empty the Ramleela ground by 4.30 am. Clueless in an unfamiliar city, supporters were seen squatting outside the ground for hours. On instructions from Ramdev's institution's coordinators, several people were seen scampering to catch buses to venues they have never been to before.

Chandra Deep, one of the central coordinators of the protest, was seen taking rounds in his vehicle, helping protestors to reassemble.

"We are announcing on the loudspeakers to the protestors to go to Bangla Sahib Gurudwara, to the park near Ranjeet Singh flyover and Arya Samaj Mandir on Minto Road. Most of them don't know how to reach these places," Deep told rediff.com from his car.

'We were forced to leave everything behind' 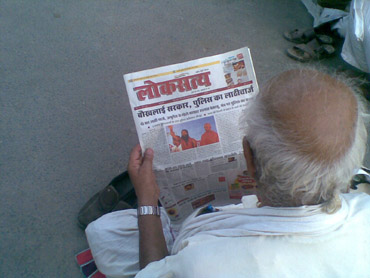 Rediff.com followed one such group as they tried to make their way to Bangla Sahib Gurudwara. No mode of transportation was available, since the police had blocked all roads leading to the maidan. The group, which consisted of several elderly people, set out for the gurudwara, which is a good three kilometres away, on foot.

"We are hoping to get some food from the langar (free kitchen) as we left our packed food inside," said a protestor, Ranjeet Singh.

The group, which consisted of about 100 people, had just reached Connaught Place, when the police swooped down on them again. The burly policemen, armed with lathis, hit the men and women in the group, asking them to go back to the ground.

I was saved from the charge because I took out my press card and held it high above my head.

Even then, I was shoved back into the group by the policemen and was told that I had to go back to Ramleela maidan as "prohibitory orders were on."

The group then had to walk all the way back to the maidan, where protestors had reassembled outside the main gate. Things back at the maidan had taken a revolutionary turn, meanwhile. Women were seen arguing with the policemen. Elderly women in the group were seen shouting at the policemen, chiding them for being worse than the "imperialist British soldiers".

People were willingly getting into police trucks, asking to be arrested. One woman, Neelam Pandey, lay down in front of a police Gypsy vehicle in protest.

"They are clearing us out from everywhere. Where do we go? The way they behaved with the women is unpardonable. All arrangements of toilets were made inside the ground. Where do the 20,000 people, especially the women, go for privacy of their ablutions?" she asked.

"Is this democracy? How can a democratically elected government behave like dictators? I will lay here. If they want to get me off here, they will have to ride their jeep over me," Neelam told rediff.com.

But Neelam's efforts lasted only till 7.30 am. A fresh batch of policemen and Rapid Action Force swooped down on the protestors again outside the Ramleela grounds and dispersed them. Protestors were pushed around, and several of them were bundled into trucks to be arrested under preventive sections of the law. After 7.30 am, only the police remained here and the protestors were left to fend for themselves. 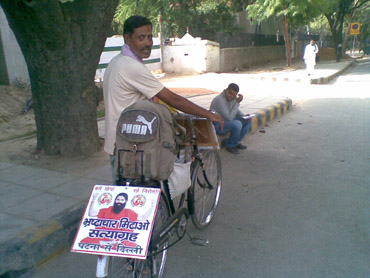 Many of them headed to Gurudwara Bangla Sahib. The only food they could access here was bread pakoras, which also ran out by 8.30 am. They wait now, desperate for the clock to strike 12 noon, for that is the time the langar will serve lunch.

Outside the gurudwara, rediff.com met a 49-year-old protestor who had bicycled all the way to the capital from Patna. Mahesh Kumar had left his village, Kadam Kua in Patna, on May 21. He pedaled the entire 1,200 kilometres, stopping at villages to tell people about Baba Ramdev's satyagraha and reached the capital on June 3.

"So many people in our villages are affected by the massive corruption in our country. But they are powerless to do anything about it. And they don't know about the movement. I stopped at several villages on my way here to tell them what they can do on their part," Kumar, who runs a business of artificial jewelry, said.

Disappointed with the "government atrocities", Kumar now plans to cycle all the way back to Patna and stop at each village he had stopped on his way here to tell them about "the corrupt government they had elected." 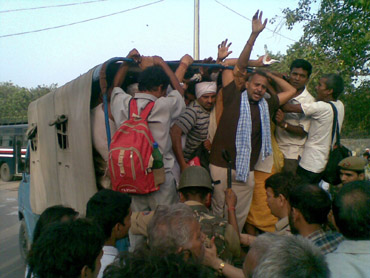 Image: People were willingly getting into police trucks, asking to be arrested
Photographs: Sahim Salim

The police justify the raid, saying Baba Ramdev violated the permission given to him to "hold a yoga shibir with a maximum of 5,000 persons," by bringing in a much larger gathering to do something entirely different.

The so-called "something different" was conducted on Friday too, but the police did not object. In fact, they were seen helping protestors enter the venue and they had maintained that they would only interfere to maintain the law and order situation.

What law and order was violated by 20,000 sleeping protestors?

Everything said and done, Baba Ramdev will be remembered for his address from the dais minutes before his arrest, asking people to maintain calm and not to resort to violence under any circumstance.

And in the upcoming elections, what this government will be remembered for is the way they swooped down on peaceful demonstrators protesting the rampant corruption within them.
Print this
article