IN PHOTOS: The Rafale's long flight to India 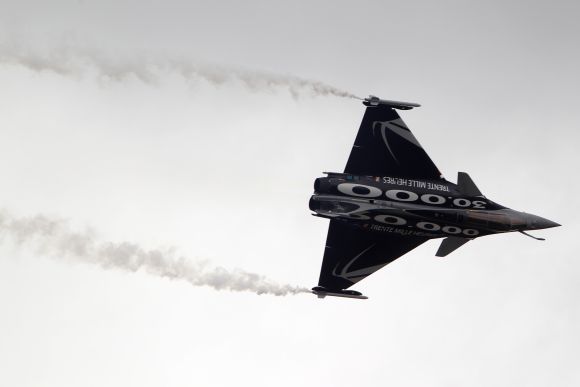 The selection of Dassault's Rafale as India's new MMRCA fighter was only the latest step in the Air Force's long and painstaking process to pick itself a winner, writes Ajai Shukla.

Long after the streets emptied that chilly winter evening in December 1981, lights were burning on the fifth floor of Vayu Bhavan in the elite Operations Branch of the Indian Air Force.

Worrying the brightest thinkers of IAF was a brash new arrival in the subcontinental skies. The US had just announced the sale of 40 F-16 fighters to Pakistan, giving the Pakistan Fiza'ya (as the Pakistan Air Force styles itself) a fighter potent, fast and agile enough to upset the air power balance in the subcontinent. That F-16 purchase unleashed a set of Indian reactions that culminated in last week's decision to negotiate with French Dassault Aviation for 126 Rafale medium multi-role combat aircraft, MMRCA for short.

India moved quickly to counter the F-16 with the Mirage 2000 and MiG-29 fighters. Soon after Squadron Leader Shahid Javed landed Pakistan's first F-16 at Sargodha Air Base on January 15, 1983, New Delhi signed a contract with Dassault for 49 Mirage 2000s.

From the outset, IAF pilots relished the Mirage 2000 as well as the relationship with Dassault.

'IAF was very familiar with the Mirage 2000' 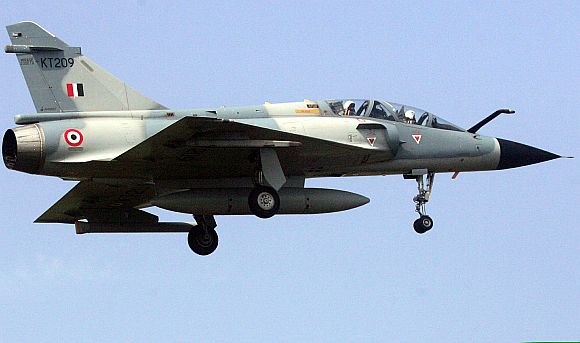 Rajan Bhasin, then a young flight lieutenant and later one of IAF's top guns, was in the first batch of eight pilots who went to France in 1984 to learn how to fly the Mirage 2000. He recalls, "The Mirage 2000 was a superb fighter. And the relationship with Dassault was always completely professional. We got the fighter we paid f#8744 and we got the training we paid for. Whatever we wanted extra, we had to pay for it. But Dassault did not cheat."

By 1987 PAF had inducted all 40 F-16s that it had contracted for and, in 1988, Pakistan ordered and paid for another 11 F-16 fighters. But though alarm bells were ringing in New Delhi and IAF was keen to order more Mirage 2000s under an options clause in the contract, it did not do so. The purchase of the Russian MiG-29, reputedly an "F-16 buster" due to its prowess in air-to-air combat, had left no space for more Mirage 2000s.

But IAF's enthusiasm for Dassault fighters still burned bright, especially after the Mirage 2000 demonstrated its ability to strike almost invisible Pakistani positions on the knife-edged ridges above Kargil in 1999.

At the turn of the century -- with the early-model MiG-21s rapidly becoming obsolete, and with their replacement, the indigenous Tejas Light Combat Aircraft still to take to the air (it first flew only in 2001) -- IAF formally asked the defence ministry to buy and shift to India the entire Mirage 2000 production line that Dassault was closing down.

This would allow Hindustan Aeronautics Limited to build the improved Mirage 2000-5 to replace the vintage MiG-21s. With Dassault shifting production to the new-generation Rafale fighter, France was willing to sell India the Mirage 2000 line.

"IAF told the ministry that we wanted aircraft with which we were familiar. That was the Mirage 2000, and we wanted the latest version: the Mirage 2000-5. As an air force we were very familiar and comfortable with the operational and tactical handling of the Mirage 2000," says Air Marshal (retired) Pranab Kumar Barbora who was vice-chief of air staff till 2010. 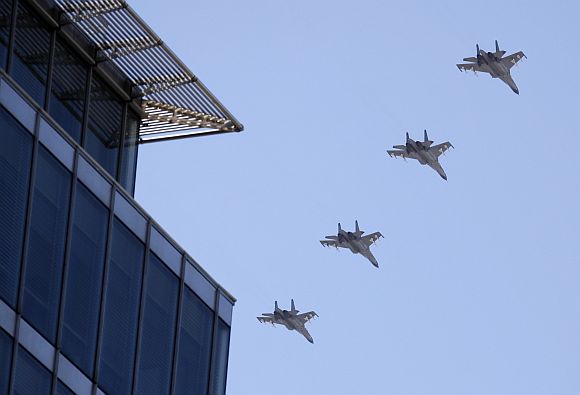 But the ministry, stung by the Tehelka expose on corruption in defence procurement, feared that a single-vendor buy from Dassault might be criticised as arbitrary. Pointing out that IAF had not availed of an "options clause" in the 1983 contract for Mirage 2000 fighters, George Fernandes's defence ministry asked IAF to float a global tender for the very best fighter that could be bought from the international market.

Another reason for a new global tender was the fear that the Mirage 2000-5 might no longer be good enough. With the American dependence on Pakistan growing due to the war in Afghanistan, it seemed likely that at least two more squadrons of F-16s would soon join PAF. These would be the formidable Block 50/52 fighters with greatly improved radars and weaponry. And PAF was also slated to get a brand new fleet of over 200 Chinese JF 17 Thunder light fighters.

Even more alarming was China's weapons and infrastructure buildup in Tibet. The old J-7 and J-8 fighters, which IAF could comfortably handle, were now being replaced by a fleet of Russian Sukhoi-27/30 fighters, and the Chinese F-10, which reportedly fields advanced avionics bought from Israel. Suddenly the dragon had an improved military airfield network in Tibet with extended runways and modernised facilities.

"We needed to boost our fighter fleet really, really, urgently," says a serving Air Marshal who prefers to remain anonymous.

"And we were determined to implement an acquisition process which nobody in the ministry could fault or delay. Today, the IAF process has become the gold standard for fighter aircraft acquisitions worldwide. The Brazilian defence minister, who visited Delhi this week, has asked us to share details with his ministry on just how we did it." 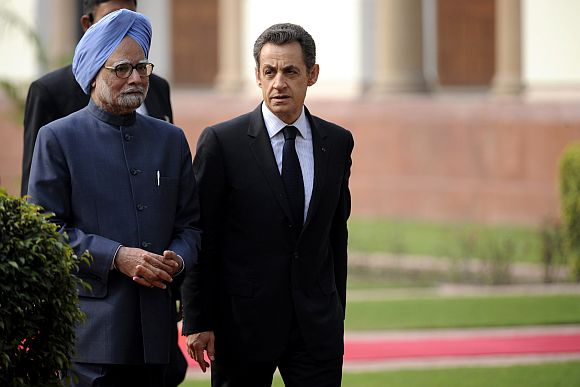 It began with the drawing up of specifications in Vayu Bhavan that demanded not the best available fighter in the world, but a fighter so good that it didn't yet exist.

The IAF specifications included: superb aerodynamic performance; the most advanced AESA (active electronically scanned array) radar that would allow the aircraft to detect and fire missiles before an enemy fighter realised that he was in the crosshairs; advanced electronic warfare capabilities to blind the opposition; and weaponry integrated seamlessly with the fighter's avionics. Everything was put down in writing before a Request for Proposal was sent out to six global aerospace companies in August 2007.

For these companies, the big question was: which fighter to offer? Lockheed Martin had the F-22 Raptor, the world's only fifth-generation fighter, which would win any competition hands-down but would never be cleared for export.

The company was also building the F-35 Lightning II Joint Strike Fighter, but that was years away from completion and could not participate in IAF's impending flight trials. Lockheed Martin eventually fielded its most advanced Block 60 F-16 fighter, dubbed the F-16IN Super Viper, with better avionics and weaponry than any F-16 sold before.

Other companies had fewer choices: Boeing fielded its F/A-16 Super Hornet, Dassault offered the Rafale, Saab the Gripen NG which is still in the future, Eurofighter GmbH offered the Typhoon, and Russia fielded the MiG-35.

In the second half of 2008, IAF conducted a technical evaluation to see whether the bids conformed to the RfP. What should have been an innocuous process turned dramatic when Dassault's bid was reportedly rejected as incomplete. While this was quickly resolved by diplomatic intervention, reportedly by President Sarkozy himself, other companies now say the Rafale was done a favour by being allowed back into the contest.

It was the next stage of evaluation -- flight trials -- that has put IAF's testing process in a league of its own. Conducted by the Directorate of Air Staff Requirements, and overseen by the quiet and unflappable Air Commodore (now Air Vice-Marshal) R K Dhir, each of the six contenders was flight-tested by IAF pilots on 660 separate performance aspects.

For example, the RfP demanded that the fighter's engine should be replaced within one hour. The maintenance teams actually made each contender do that.

IAF had clearly learned a lesson from MiG experience 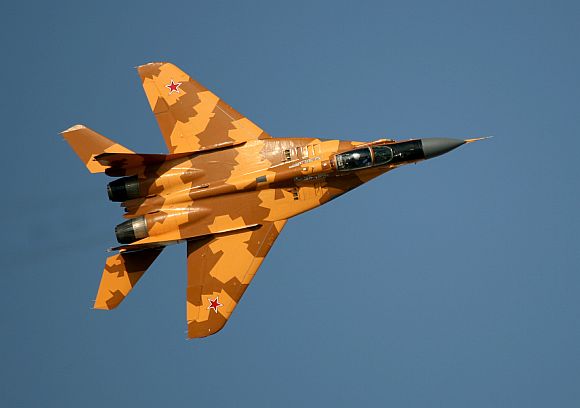 Air Marshal Barbora, who oversaw the flight evaluation process as IAF's vice-chief, says that six teams of pilots, flight engineers and maintenance staff were mustered -- one for each aircraft. Each pilot began by learning to fly the fighter he would evaluate, while the flight engineers and maintenance staff learned the technical ropes. The IAF pilots physically flew each of the contending fighters, albeit with a "home" pilot in the second seat. This was the first time that any air force has been allowed to conduct such a fly-off.

Last April, the ministry "down-selected" the Rafale and Typhoon, which meant that only these two aircraft had passed the flight trial evaluation.

Now the game had changed; with performance established, the cheaper of the two was going to be adjudged the winner. For the first time in India, costs were not compared on the ticket price alone, but on how much the fighter would cost to buy, build, upgrade and operate over a service life of three to four decades.

IAF had clearly learned a lesson from the Russian MiG experience, where a cheap upfront price that seemed initially attractive led to enormous operating costs and a lower aircraft availability that meant that when IAF paid for six squadrons, it actually had just three squadrons to fly.

Air Marshal (retired) Padamjit Singh Ahluwalia, who brought the first Mirage 2000s to India, says, "Russian fighters like the MiG-29 are great for air shows but serviceability is often a problem. When you get airborne, the radar often becomes unserviceable... sometimes this happens between two sorties."

The French seem here to stay 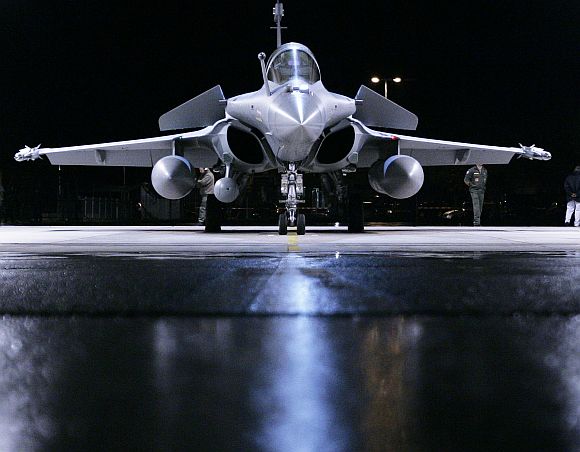 The final countdown has begun, towards signing a contract with Dassault. A defence ministry body called the Contract Negotiating Committee will now engage Dassault in beating down its price, grilling Dassault's negotiators on the calculations that determined the final price of the Rafale, and scanning the costs of labour and materials that go into the fighter.

For example, CNC will find out how much titanium goes into each aircraft and then check titanium prices on the London Metal Exchange. CNC will also vet labour costs, determining the number of skilled workmen and engineers needed to build the Rafale and multiplying that by the wages (which are notoriously high in France). The aim will be to demonstrate to the Dassault negotiators that the Rafale can be built cheaper than the price they have quoted.

CNC negotiations will also centre on the technologies that Dassault (and its sub-vendors, like Thales) will transfer to India, and the modalities for doing so. The RfP mandates that the technology for the AESA radar (which Thales builds) is to be transferred to India. CNC will verify how that technology, and others, would actually be transferred. Offsets are another minefield that Dassault must cross, ploughing back into Indian industry at least 50 per cent of the estimated $15-17 billion contract value of this deal. Only after these issues are resolved will a contract be actually signed. Senior IAF officers believe this could take till late-2012.

If the Rafale purchase goes through, the French seem here to stay.