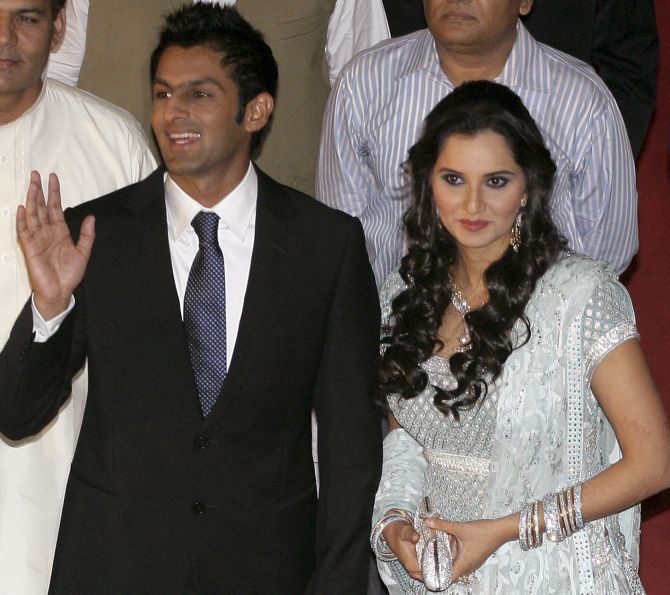 Image: Pakistani cricketer Shoaib Malik with his wife, Indian tennis stars Sania Mirza, as they pose for photographs during their wedding reception in Lahore
Photographs: Reuters

Indian tennis star Sania Mirza on Thursday hit out at politicians for raising objections to her being appointed as Telangana's brand ambassador, saying that her family had been staying in Hyderabad for more than a century and to call her an outsider was condemnable.

Sania was named the brand ambassador of the newly-created state on Tuesday, a move that triggered a political furore.

The opposition Bharartiya Janata Party started the controversy by saying that Sania does not deserve the honour as she is the "daughter-in-law of Pakistan" after her marriage to cricketer Shoaib Malik.

Poll: Is Sania a fitting ambassador for Telangana? "It hurts me that so much precious time of prominent politicians and the media is being wasted on a petty issue of my being appointed the brand ambassador of my state of Telangana. I sincerely believe that this precious time should be spent on solving the more urgent issues of our state and country," Sania said in a statement.

Asserting her Hyderabadi roots, Sania said her ancestors had contributed to the city and her marriage to Malik does not take away the fact that she remains an Indian citizen. "I am married to Mr Shoaib Malik, who is from Pakistan. I am an Indian, who will remain an Indian until the end of my life," the 27-year-old insisted. 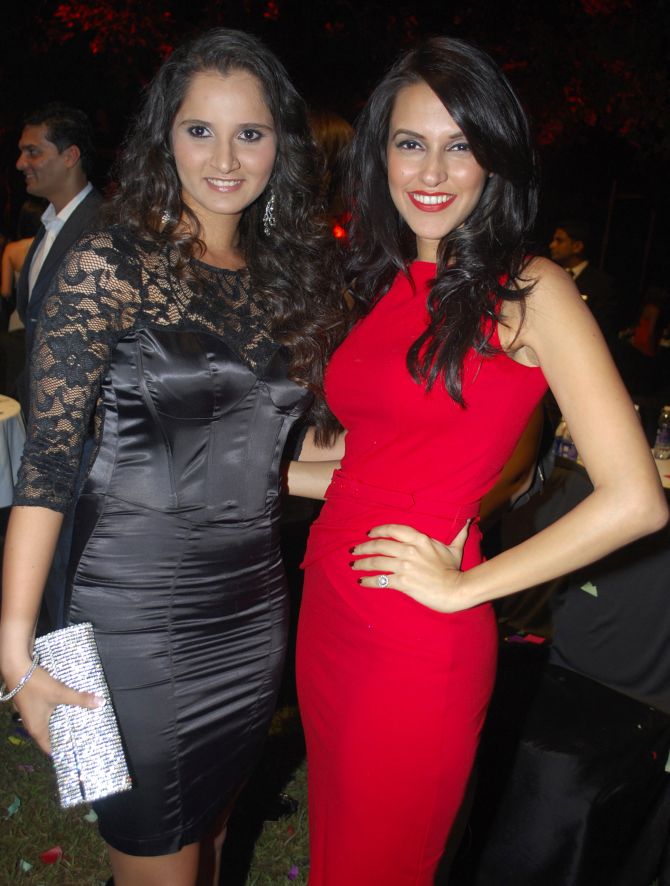 Image: Sania Mirza is all smiles as she poses with Bollywood actress Neha Dhupia in Mumbai
Photographs: Manav Manglani/Reuters

"I was born in Mumbai as my mother needed to be at a specialist hospital since she was seriously unwell at the time of my birth. I came home to Hyderabad when I was 3 weeks old.

"My forefathers have lived in Hyderabad for more than a century. My grandfather, Mr. Mohammed Zaffer Mirza started his career as an Engineer in Nizam's Railways in Hyderabad in 1948 and died in his ancestral home in Hyderabad," she said.

Sania also spoke about her great grandfather Mohd Ahmed Mirza, insisting that he "was also born and raised in Hyderabad. He was the chief engineer, water works, Hyderabad and was responsible for constructing the famous Gandipet dam."

"My great, great grandfather, Mr Aziz Mirza was the home sSecretary under the Nizam in Hyderabad and worked tirelessly for relief works during the historic Musi River floods of 1908." Sania said it was hurtful to hear comments which sought to brand her as an outsider.

"So, my family belongs to Hyderabad for more than a century and I strongly condemn any attempts by any person, whosoever, to brand me an outsider. I hope this clears all doubts and issues," she said.

The tennis player had never participated in agitation for a separate state of Telangana, said Laxman who is leader of the BJP in Telangana legislative assembly.

Handing over a grant of Rs 1 crore in Hyderabad on Tuesday, Chief Minister K Chandrasekhar Rao appointed Sania as brand ambassador of Telangana and described her as a daughter of Hyderabad.