Sign in  |  Create a Rediffmail account
Rediff.com  » News » 'If Anna's fight doesn't affect YOU, there is something wrong'

'If Anna's fight doesn't affect YOU, there is something wrong' 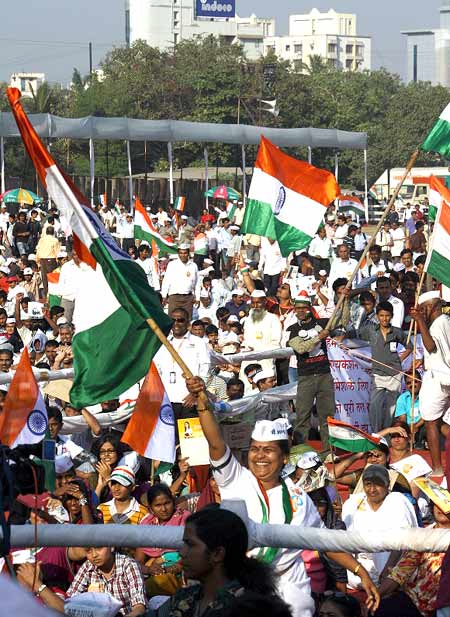 The turnout at Mumbai's MMRDA ground may have fallen short of Team Anna's expectations, but there was no dearth of enthusiasm or anti-establishment rhetoric at the venue, finds Sanchari Bhattcharya

Armchair sceptics and detractors of activist Anna Hazare had a field day on Monday.

They predicted that the activist's three-day fast in Mumbai will turn out to be a flop show, that not even 500 people will venture to the MMRDA ground in suburban Bandra Kurla Complex to support the Gandhian's protest fast, that media personnel would outnumber Hazare's actual supporters and TV cameras would repeatedly focus on the handful of people present to create the illusion of a massive turnout.

"If I stand on the street, I will attract more spectators than Anna Hazare," scoffed an esteemed journalist.

Needless to add, these naysayers have not ventured anywhere close to MMRDA ground where Hazare, along with his aides Arvind Kejriwal and Kiran Bedi, is on a protest fast to demand a stronger Lokpal Bill. 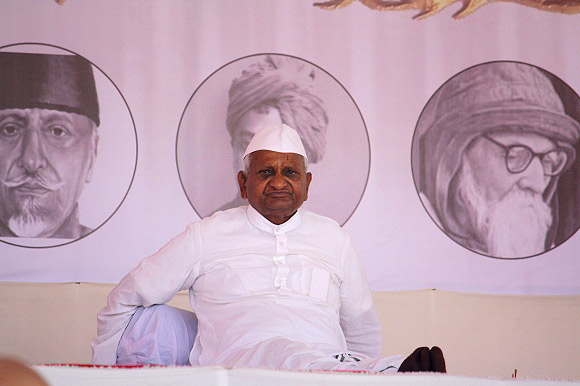 If they ever bothered to do so, they would have been surprised, pleasantly or otherwise.

The turnout, at the ground located at the heart of a bustling office district in suburban Mumbai, was probably not up to the expectations of Team Anna.

A senior journalist recalled that at Ramlila Maidan -- where Hazare observed a protest fast for 12 days in August -- the crowd was so thick that one barely had space to move.

In comparison, considerable chunks at the Mumbai venue seemed vacant, the number of hawkers peddling tricolours was fewer and not too many counters were serving food.

Still, thousands of people did turn up to express their support for the 74-year-old-Gandhian who has gone on yet another fast to demand a strong anti-corruption bill. 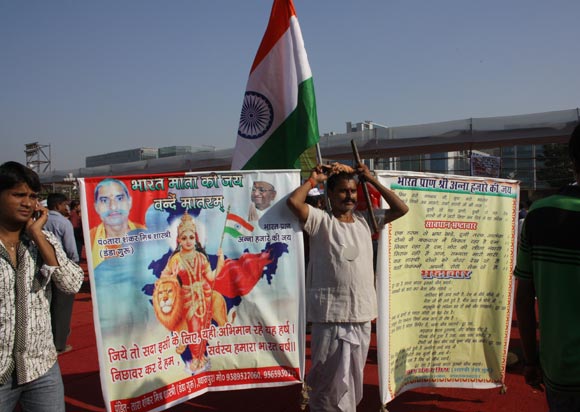 Some of them might be idlers who came out of sheer curiosity and some may have just wanted a free lunch.

In fact, Piyush Bose, who is selling tricolours outside the venue, rues that he has sold only three flags today. During Hazare's fast in Delhi, he used to sell 40-50 flags in a day, informs Bose.

But some citizens of India's busiest city did manage to find time to pitch in their support for Hazare's crusade against corruption.

Many of them sat patiently in the unpleasantly warm venue, without even a canopy, sporting 'I am Anna' caps and 'I am with Anna Hazare' banners. They brandished posters and flags to express their unflinching dedication to the cause.

They sat through several meandering speeches by members of Team Anna and some other stuffy speakers. And more and more of them trooped in to fill up the yawning gaps at MMRDA ground. 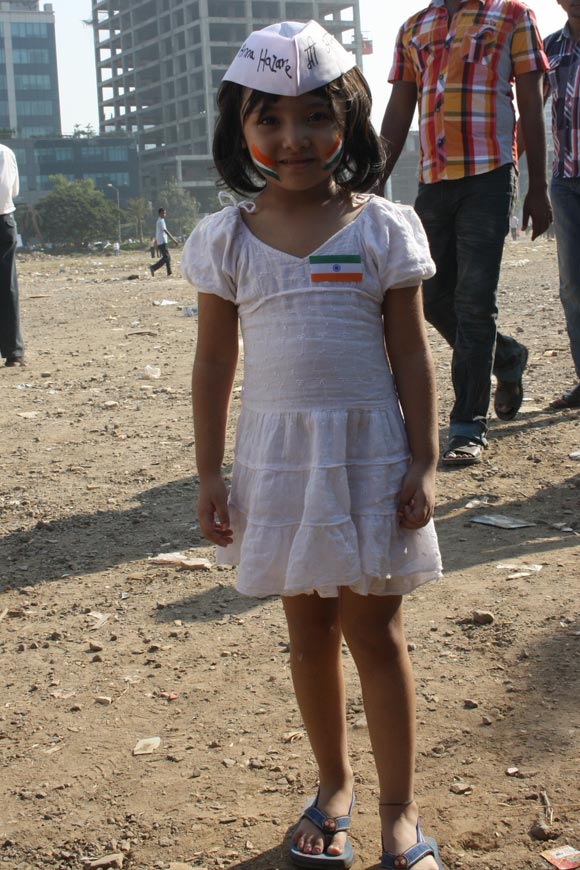 "Why are you media people so cynical? Why can't you portray anything in a positive light," asked Amish Shah. He has been tirelessly waving a particularly large tricolour since morning and has also inadvertently whacked some people with it.

Shah, an IT engineer, also has had enough of journalists asking him if he believed Hazare's movement would succeed.

"How can you sit in an air-conditioned office and make judgements about the movement? Come out here and see the kind of support that man has. He is not getting anything out of  this, he is fighting for all Indians. If Anna's fight does not move you or affect you, there is definitely something wrong with you," he says scathingly.

Some distance away, Dharam Sharma is holding a bunch of creative, critical posters that slam the government and seek support for Hazare. 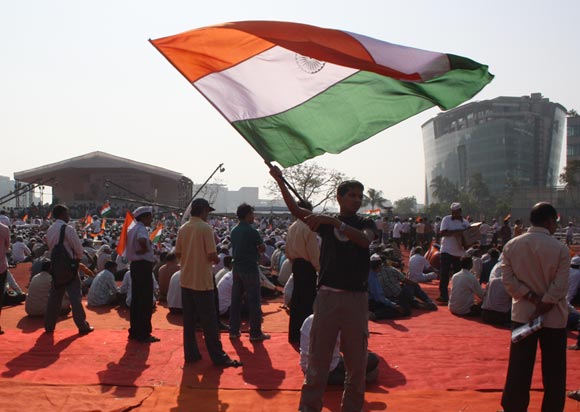 Responding to how he could take three days off to attend the protest, he says, "Isn't this a people's movement? What is the point of having any movement here if all we, the people, do is watch from the sidelines?"

Meanwhile, on the dais, a number of high-profile speakers are busy making a point.

Anupam Kher tells the crowd about the tremendous positive response he has received since he publicly expressed support for the movement.

When the seasoned actor says, "I have never, ever seen so many tricolours at the same time," the eager crowd laps up the catchy line. 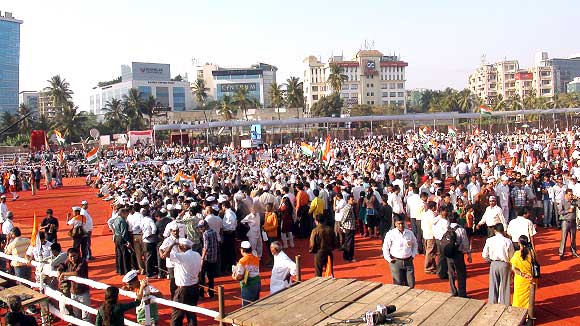 Soon after, film producer, poet and journalist Pritish Nandy takes the microphone and says, "I am not here to make a speech".

He promptly proceeds to do exactly that, talking about how corruption is the most "anti-national thing in India'.

Nandy's speech, delivered in crisp English and a measured baritone, is lost on much of the crowd. A bystander quips snidely, "What does he think he is doing, giving a voiceover for a film?"

As the crowd gets visibly restless, Mayank Gandhi comes to the rescue. He is the chief of the Mumbai unit of India Against Corruption and one of the best speakers in Hazare's fold. 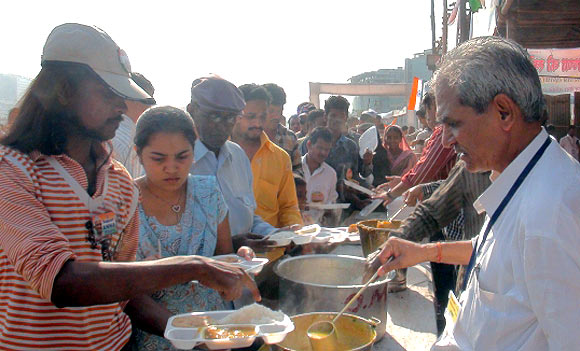 "You all are doing okay na? Is the food okay?  What about the bathrooms," he asks the gathering, which assures him that all is well with the arrangements.

"I know that it is too sunny here," continues Gandhi, "but maine uparwale se baat ki hain, kal tak theek ho jayega (I have talked to God and it will be fine by tomorrow).

We close in on the food counter to find out if allegations -- of the queues here being longer than those at the venue gate -- are true.

They are not. The food, though, smells lovely.

A bunch of volunteers have been serving steaming hot daal, sabzi and puri to scores of people since morning. 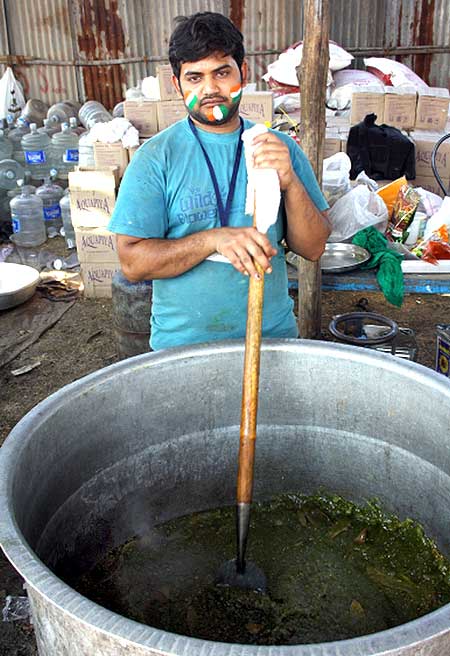 "As long as Anna is here, we are here," says one of the volunteers serving food, who is reluctant to share his name. He wants no mention in the article but is eager that we try out the lunch.

"Please have some of this. Don't think this food is not tasty just because we are giving it for free. If you have this food once, you will never be able to forget it," he claims.

The volunteers plan to continue serving people till 12 in the night and throughout the next two days.

"Yeh Bhagwaan ka bhandara hai, kabhi khatam nahi hota hai (This is God's own kitchen, the food will never get over)," he says, confident about serving the thousands of attendees. 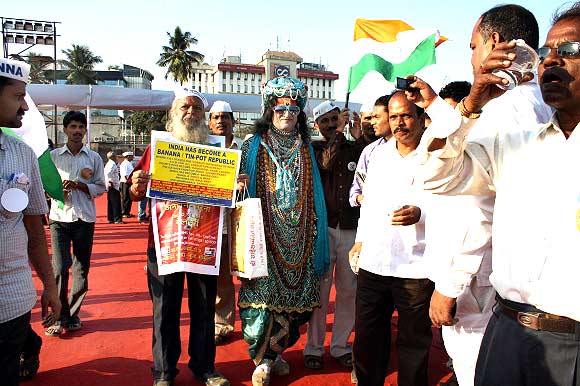 Ravi Srivastava and Piyush Bhatia, members of India Against Corruption, outline the way forward for the movement.

"After the three-day fast is over, we will start the jail bharo movement. We will protest outside the residence of our local Member of Parliament. You see, our MPs are very important people, so the police will have to send us to jail," says Srivastava cheerfully.

"And I am sure they will have to keep us in jail for quite some time, they have no choice," adds Bhatia. 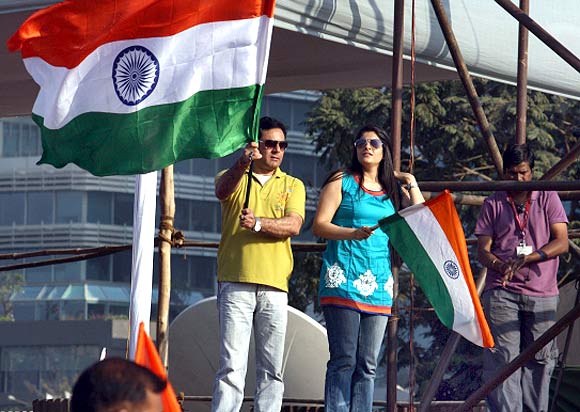 Outside the venue, as enthusiastic Mumbaikars flock to the registration desk, a bunch of IAC volunteers keep a sharp eye on the proceedings.

In spite of the heavy deployment of police personnel, they are still wary of the disruptive power of forces that are against Team Anna.

"You know who I am talking about, you know how powerful they are, what they are capable of doing. So we need to be always on our guard," explains one of them.

Translation: The treasure is in jeopardy not because of the bandits, but from the men guarding it!