Sign in  |  Create a Rediffmail account
Rediff.com  » News » 'I knew he was dead when his mobile didn't ring' 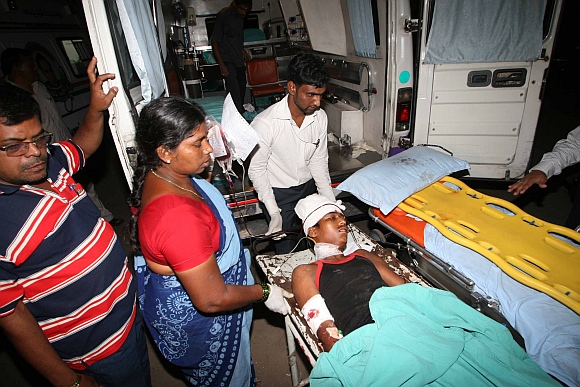 Image: A blast victim being taken to the hospital
Photographs: SnapsIndia Mohammed Siddique in Hyderabad

Heart rending scenes were witnessed outside the morgue of Osmania Hospital where a large number of people had gathered for task of identifying the victims of the twin blasts. Mohammed Siddique reports.

As the doctors and the morgue staff was making preparations for the autopsy of the bodies during the night, the air was thick with the stench of blood and wailing of the family members.

"My world has come down crashing. I don't know how I will survive. My eldest son has perished," said 60-year-old Viresh Lingam of Dilsukhnagar.

"He called me only five minutes before the incident and said he was coming home. He had stopped to have some snacks and then his phone went dead," he said amid the wailing.

'I tried his mobile and it didn't ring' 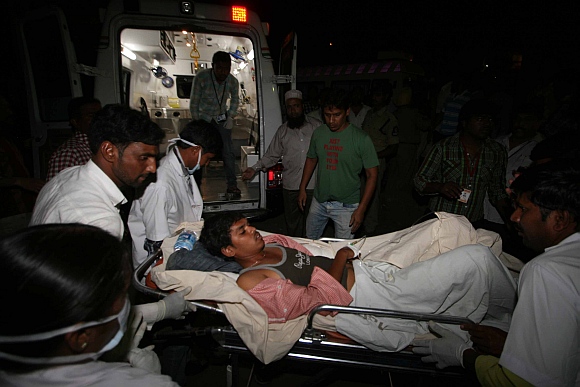 Image: An injured person being loaded into an ambulance
Photographs: SnapsIndia

Harish, who worked at a Bangalore-based software company had come to the city to visit the family and appear for a job interview.

"When I saw the news of the blast on TV and tried his mobile and it did not ring, I knew he was dead," said Viresh Lingam, a relative.

Sitting on the hospital pavement besides Viresh was Iqbal Ahmad, whose 17-year-old-son Aijaz Hussain died in the blast, while returning from college. The lower half of his body was blown away in the blast.

'I don't know why God chose him for this' 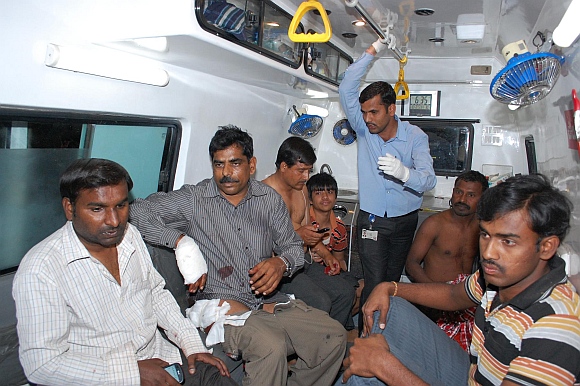 Image: The blast survivors being rushed to the nearest hospital
Photographs: SnapsIndia

"Why has this happened to my son? He was a sweet soul. I don't know why God chose him for this," said Iqbal as tears drenched his beard. Other family members and friends were trying to console him as he collapsed to the ground.

Not far from him was Sudhakar Reddy who kept murmuring, "What I will tell my family members. How I will face the children. She was such a sweet girl," he said recalling his sister, 30-year-old Swapna, who died in the blast.

In yet another corner of the morgue courtyard, family of 18-year-old Rafi Ahmad was mourning. His relatives were trying to console his father Rasheed, who complained of chest pain after seeing the body of his son lying on the ground in the cold mortuary.

One victim had to carry his own saline bottle 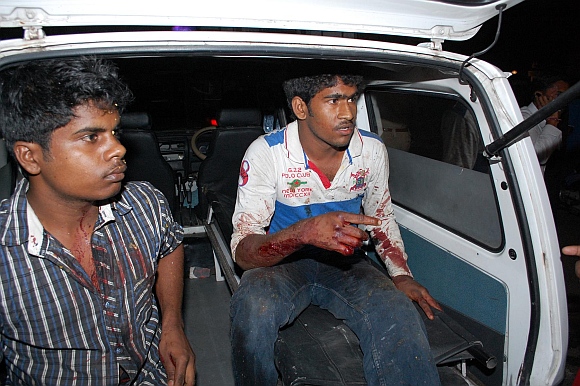 With more and more people continuing to pour in to the morgue area to identify the other dead beyond midnight, more tragic tales were unfolding.

At the Osmania Hospital, the conditions were very difficult as 33 injured and maimed people were brought in after the blasts. With beds in emergency ward not sufficient to accommodate all, some of the injured were lying on the grounds. One victim had to carry his own saline bottle.

With hundreds of people gathered, the police was finding it difficult to make way for the injured to take them to other hospitals. Ambulances were making trips to shift 10 of the patients to private hospitals for better medical care.