Sign in  |  Create a Rediffmail account
Rediff.com  » News » I have NOTHING to say to Digvijay Singh: Ramdev

I have NOTHING to say to Digvijay Singh: Ramdev 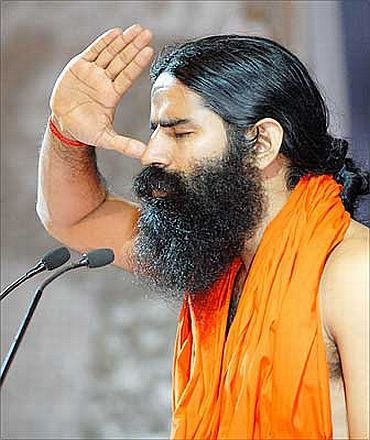 Yoga guru Ramdev on Saturday threatened to launch a mass agitation from August 9 unless the United Progressive Alliance government took effective steps for the establishment of a strong Lokpal and in bringing back black money stashed abroad.

"The government is not taking result-oriented steps to bring back black money. It is also not doing enough for setting up an effective Lokpal to rein in corruption. They will have to do these two things. Otherwise, on August 9, we will launch a stir with the support of crores of people of this country," Ramdev said.

The Quit India movement was launched on August 9, 1942.

"We will only relent after the black money comes back and the country gets a strong Lokpal. Otherwise, I am ready to pay with my life," he said.

'It will be a fight to the finish' 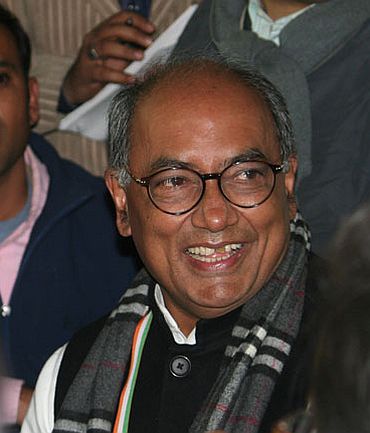 The August 9 stir would be "100 times bigger" than what the country witnessed at the Ram Lila ground, Ramdev said.

"It will be a fight to the finish, a decisive battle. I can only say we will fight even if we have to give up our life for the nation and its people," he said.

Lashing out at the UPA government, Ramdev said, "It is not taking effective steps to bring back black money. Not a single rupee will come back from the steps the government is taking."

'I have nothing to say to him' 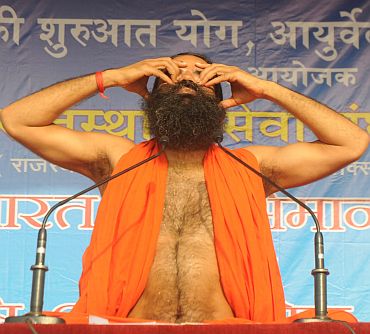 He said the treaties which India had inked with other nations would not help in bringing back black money.

On the controversial issue of coal block allocation, Ramdev said, "Fifty billion
tonnes of coal were given at throwaway prices to some private companies. This amounts to deceiving the country."

On the functioning of the Central Bureau of Investigation, he said, "Barring one or two occasions, the CBI has worked as a puppet of the government."

"The ruling party uses the CBI to terrorise opposition leaders. Till it is made completely free, no probe carried by it can be fair," he said.

On Congress leader Digvijay Singh asking him to declare the black money he possesses before launching an anti-graft campaign, Ramdev said, "If the prime minister, the Congress president or Rahul Gandhi ask me, then I will see. But I have nothing to say to him."