Sign in  |  Create a Rediffmail account
Rediff.com  » News » View: How Rahul Gandhi can be a legitimate PM

View: How Rahul Gandhi can be a legitimate PM 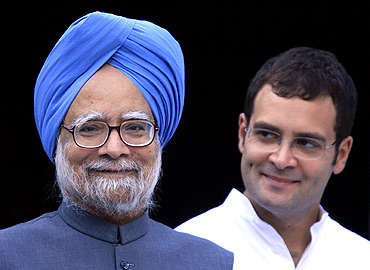 Rahul Gandhi must not be in a hurry. He must assume leadership of the party in the coming Lok Sabha polls, emerge victorious and then be elected as prime minister. Only then will his achievement be invested with legitimacy, says Vivek Gumaste.

The crown prince has come of age, his edification is complete and he is ready to accept his rightful place on the throne. It is time for the regent to hand over the scepter and step aside for the royal anointment to take place. Seems like a clip about a monarchy in medieval India? Think again.

This scenario represents the political reality of 21st century India as evidenced by the recent whisperings, innuendoes and frank assertions emanating from the courtiers of the royal darbar of the Congress party.

Digvijay's words are both prescient and relevant 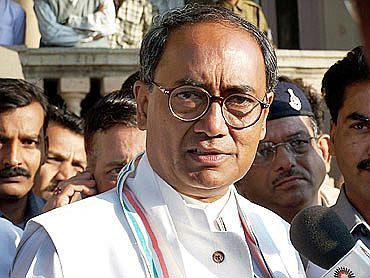 Speaking to mediapersons, Digvijay Singh, the Congress party's maverick troubleshooter and proclaimed Gandhi loyalist, remarked: "I think it is time that Rahul can become the prime minister."

For added measure he went on to surmise: "Rahul is now 40 and he has been working for the party for the last seven to eight years. The scion of Gandhi family had the right qualities, instincts and experience to take up the mantle of the prime minister-ship now."

Coming as it were from a senior functionary of the party considered to be a political confidante and guru of the young Gandhi, these words are both prescient and relevant.

Has Manmohan Singh outlived his utility? 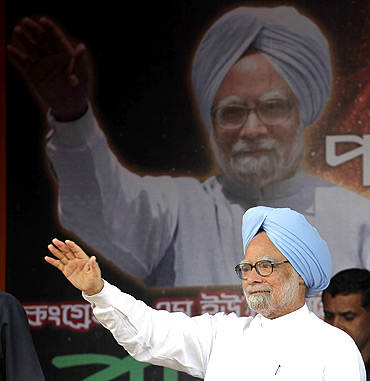 Do these utterances presage a change in the party's top leadership, a foregone eventuality finally verbalised in no uncertain terms? Has Prime Minister Manmohan Singh outlived his utility?

In all honesty, one cannot deny that Singh landed the premier position by default, after a beleaguered Sonia Gandhi, in a show of ascetic austerity 'sacrificed' the top post in 2004.

Singh was the perfect compromise candidate: his unimpeachable personal integrity and excellent track record made him a perfect showpiece while his non-threatening persona and negligible political clout suited the crafty speinmasters of the Congress who saw in him an eminently pliable candidate to keep the chair warm.

But what marked him out as an acceptable candidate was also the precise reason for his failure. Without the political strength to assert oneself, a leader can neither exploit his native integrity nor utilise his clinical acumen to bring about change or provide effective leadership. That has been the tragedy of Manmohan Singh. 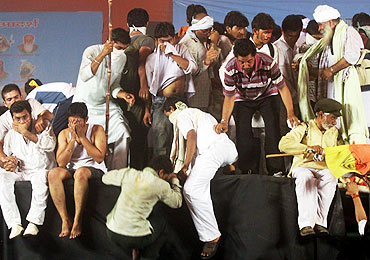 Image: Supporters of Baba Ramdev scatter after tear gas canisters were thrown in by police at the Ramlila grounds on the second day of Ramdev's fast in New Delhi on June 5
Photographs: Reuters

Nowhere was this more evident than in the recent Baba Ramdev crisis. A confused nation, irate with the ham handed police handling of the matter sought out the prime minister for guidance and found a vaccum. His muted terse remark justifying the police action came a little too late and lacked both credibility and conviction.

Since 2004, India has been witness to a deceptive charade of manipulative politics wherein the integrity and honesty of one person has been used as a fa ade to camouflage a host of wrongdoings causing irreparable harm to the Indian polity and one in which the prime minister's post has been severely compromised.

This has to change. India demands and deserves a prime minister with courage, conviction and above all the political clout to carry out his mandate.

If the Congress, by virtue of being the largest constituent of the ruling combination desires to elect (not anoint) Rahul Gandhi as its leader, that is a prerogative which it is entitled to.

However, the process must be transparent, adhere to political norms and be guided by a sense of national responsibility. The politics of subterfuge cannot continue.

Rahul must prove he won't succumb to backstage political brokers 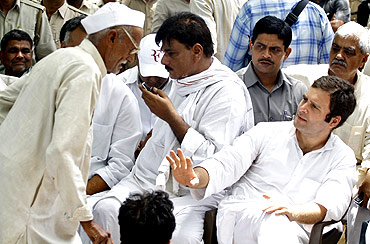 Image: Rahul Gandhi gestures to a villager during his visit to Parsaul village after clash between farmers and police in Gautam Buddha Nagar district of UP
Photographs: Parivartan Sharma/Reuters

To be fair to Rahul Gandhi, he has exhibited a modicum of decency so far, refraining from prematurely and hastily appropriating the coveted position.

He has spent seven years traveling the countryside, interacting with the people and making a sincere effort to understand the ins and outs of politics.

But that alone is not enough.  He must prove to the nation that he is an independent individual who will not succumb to the maneuvering of backstage political brokers, is capable of decisive action and holds strong views about the workings of the nation.

If not he risks the danger of being dubbed as a dumb blue-eyed boy born with a silver spoon in his mouth, hoisted to the top by virtue of nothing more than his pedigree in direct contravention of the tenets of a democracy.

For a person slated to be the next prime minister, his views on current controversies including those that have a direct bearing on his future and integrity remain unknown. He needs to clarify certain issues to bolster his credibility.

Imperative for Rahul to be open to scrutiny 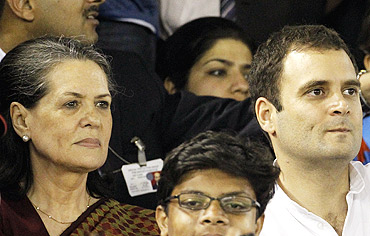 First, does he or does he not concur with the decision to place the prime minister under the purview of the Lokpal? The Congress party's volte-face on this issue raises troubling questions about an ulterior motive.

With the current prime minister being above board, the Congress party's intransigence on this matter is all the more inexplicable prompting one to wonder whether it is meant to shield someone down the line.

Therefore it is imperative for Rahul Gandhi to demonstrate a willingness to be open to scrutiny to fortify his anti-corruption credentials.

Second, Rahul Gandhi's circumspect stance on the issue of black money secreted away in Swiss banks along with the government's hesitancy to pursue the matter aggressively paints a picture filled with doubt. Are there skeletons in the closet waiting to tumble out?

To dispel these nagging concerns that may inadvertently bring into question his family's financial holdings, Rahul Gandhi needs to stridently support the attempt to recover these illicit monies.

Rahul Gandhi must not be in a hurry 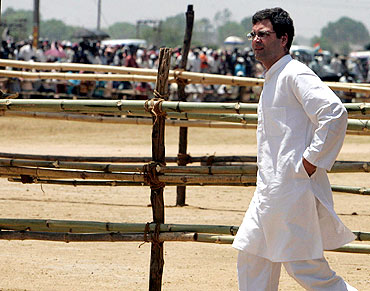 Lastly, to change prime ministers midstream smacks of a back door entry for Rahul Gandhi, something he cannot be proud of.

Rahul Gandhi must not be in a hurry. He must assume leadership of the party in the coming Lok Sabha polls in 2014, emerge victorious and then be elected as prime minister.

Only then will his achievement be invested with legitimacy. More importantly it will be seen as a pristine vindication of Rahul Gandhi's acceptability and as a resounding endorsement of Indian democracy.