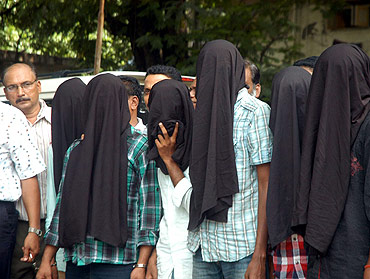 The Mumbai police on Monday claimed to have cracked the murder case of Mid Day crime reporter Jyotirmoy Dey, and arrested seven Chhota Rajan gangsters who reportedly orchestrated the crime. But the police is still curiously silent over the motive, reports Toral Varia.

On the 16th day after the brutal killing of Mid Day crime reporter Jyotirmoy Dey, the top brass of the Mumbai Police finally announced that the case has been cracked. Mumbai Police Commissioner Arup Patnaik announced to the media that seven gangsters of underworld don Chhota Rajan's gang have been arrested. The accused were paid Rs 5 lakh  by Rajan to eliminate Dey. Investigators, however, remained silent on the motive behind the contract killing.

Dey, 56, was shot dead by motorcycle-borne assailants in suburban Powai on June 11, drawing widespread outrage. Post mortem reports revealed that Dey was shot at from close range. A total of five bullets were lodged in his body.

Please click NEXT to read how the killers formed a team to kill Dey...

How the killers formed a team to kill Dey According to the Mumbai police, the first and the most crucial arrest was that of  Rohit Thangapan Joseph alias Satish Kalia. Mumbai crime branch sleuths claim that it was sustained questioning of the main accused Satish Kalia that finally helped them put the case together.

Its was revealed during Satish Kalia's interrogation that approximately 20 days before the killing, he received a call from underworld don Chhota Rajan informing him a job that needed to be done.

Without disclosing who the target was, Chhota Rajan told Satish Kalia that money and weapons for the job will be arranged for him. After which Satish Kalia promptly went to the Chhota Rajan stronghold in Chembur, a Mumbai suburb, and collected an amount of Rs 2 lakh from an unidentified person.

Kalia was then instructed to head to Nainital, and further to Kathgodam to collect a sophisticated .32 bore foreign made revolver and 25 Czechoslovakian cartridges.

On his return, Satish Kalia contacted his old friend and partner in crime Anil Waghmode. On instructions form Satish, Anil went about assembling other members of the team for the operation.

Bablu, in turn contacted Arun Daake and Abhijit Shinde, his trusted aides from Chemur. Daake in turn got in touch with his friend and fellow criminal Sachin Gaekwad. 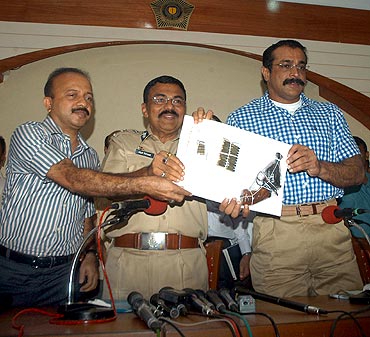 After the team was ready, on June 6 Satish Kalia received another call from Chhota Rajan. This time Rajan gave a detailed description of the target, where he would be found, how he looked and the number of Dey's motorcycle.

Satish was informed by Rajan that Dey could be either found at Mid Day's office at Penninsula Centre in Parel or at his residence at Hiranandani in Powai. All the details were shared with the shooter without revealing J Dey's name, identity or profession.

On June 6 itself, Kalia promptly got in touch with his deputy Anil Waghmode and shared the details and asked him to conduct a recce immediately the day after, on June 7.

Accordingly on June 7, Waghmode went to Peninsula Centre. At about 2 pm that day, he spotted Dey arrive at his usual time and saw him park his bike. Anil identified J Dey as the intended target and reported back to Satish Kalia.

Kalia wanted to be doubly sure of the kill. So on June 8, he accompanied Waghmode to the Peninsula Centre. The duo again spotted Dey arriving on his motorcycle at his usual time.

"But Satish Kalia decided that killing Dey in Penninsula Centre in broad day light would be dangerous as it was a crowded office area and that escape would be difficult," said Joint commissioner of Police (Crime) Himanshu Roy.

'They spent two days to spot Dey at Powai' 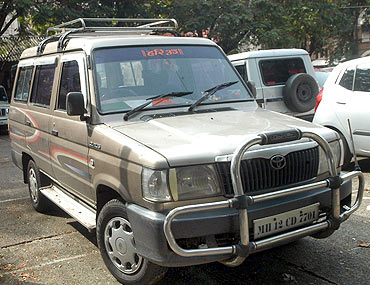 Image: The Qualis car reportedly used by the accused in the operation to kill Dey
Photographs: Sahil Salve

Kalia then got the team together and decided to locate J Dey at Hiranandani in Powai. The entire team used three motorcyles (in groups of two and one) and a Qualis to scan the area. The accused spent the whole of June 9 and 10 trying to spot Dey in the Hiranandani area of Powai, without much luck.

On June 11, at about 1.30 pm, one of the teams spotted Dey near the R-City Mall circle in Ghatkopar. They immediately alerted all the others members and then started trailing Dey.

Dey first stopped at some place near the Hiranandani Hospital where he went into an underground area to photocopy some material. The killers saw his motorcycle and helmet which was parked outside, but decided against killing him there for fear of too many eye witnesses.

Dey's killers then followed him to a courier company near the main gate of the Indian Institute of Technology in Powai. Here too the killers were wary of the crowd and decided to follow him further.

"As Dey was taking the left turn near Crysil House in front of the Spectra building (in Hiranandani, Powai) Satish Kalia, who was an armed pillion on one of the bikes, instructed his rider to speed up. They neared Dey and pumped five rounds of bullet in his body from behind. One of the bullets hit his heart causing his death immediately," Roy told mediapersons.

"All through the operation, the killers were unaware of the name, identity and the profession of Dey," added Roy.

In a pre-decided move, the killers then headed towards Mangesh Agavane's residence in Jogeshwari. "It was in Jogeshwari where the killers saw television news and they realised that something extraordinary had happened," narrated Roy.

'After the crime, they travelled to different religious places to evade arrest' After seeing the news channels, Kalia contacted Chhota Rajan and told him that he had not informed them about the fact that the target was a famous journalist. According to the police, Kalia claims that Rajan told them that they would be paid more money and everything will be taken care of.

On June 12, two out of the seven got away from the group in Mumbai itself while the rest of them proceeded to Nalasopara in adjoining Thane district to collect the remaining Rs 3 lakh from another punter of the Rajan gang.

After collecting the money the accused travelled to 10 different religious places in an attempt to evade arrest.

They went from Pawagadh in Gujarat to Shirdi to Akalkot to Yadgiri in Karnataka, to Sholapur (where Bablu got off), then to Bijapur (where Arun Daake got off) then to Sangli,
and further to Madurai, Bangalore and finally Rameshwaram before finally getting arrested.

Meanwhile, under immense pressure and media scrutiny various teams of Mumbai police were probing on different angles to the crime. In the process, the police claim to have activated their entire network of informants to get details on the listed and non-listed members of the Chhota Rajan and D Company gangs.

"There is technical evidence and then there is human intelligence. In such cases, we usually start with looking for those who are on our records. It's like looking for a needle in a haystack. But sometimes it's worth the effort," Roy told mediapersons on Monday.

Based on information from one of the 'khabris' of the Mumbai crime branch, a team of officers was flown to Rameshwaram in Tamil Nadu from where Satish Kalia, Anil Waghmode and Abhijit Shinde were arrested.

After their arrest, the accused revealed details about Nilesh Shendge alias Babu who was arrested from Solapur. Arun Daake, who had returned to Mumbai from Bijapur, was arrested along with Sachin Gaekwad and Mangesh Agawane.

Commissioner of Police Arup Patnaik assured the media of bringing the case to its logical conclusion.

He said, "The next step is the most difficult one: of getting the papers, documentation, preparing for the trial etc., which I assure you will be done in a very professional manner and the case will be brought to its logical conclusion."

All the suspects have criminal backgrounds Over 150 persons, including family and friends of J Dey, informers, gang members, and witnesses have been questioned by various teams of the crime branch.

Police claims to have five star eye witnesses in the case.

They also claim to have cracked atleast two email accounts operated by Dey. One of these had a 16 digit password, 3,000 email exchanges, and 250 draft mails.

Police have recovered ten mobile phones and approximately Rs 20,000 in cash from the seven arrested Chhota Rajan gangsters.
Almost all the suspects who have been arrested have a criminal background.

34-years-old Rohit Thangapan Joseph, also known as Satish Kalia, a well-known figure in the underworld circles, was the main shooter and the chief of the entire operation, claims police.

A shooter in the Chhota Rajan gang, Kalia is a resident of Golibar Nagar in Mumbai's Khar east.

In 1998 Kalia was again was charged with the murder of one Mohan Mohite, a key witness in an important case.

In 2004, he was involved in the murder of one Mahesh Dewadiga. Again in 2004, on the behest of underworld don Chhota Rajan, Kalia killed one Ashok Shetty who was suspected to be working for the rival Dawood gang.

Anil Waghmode is a close aide of Satish Kalia. Both have executed several operations together for Rajan. Anil Waghmode also has one attempt to murder and three cases of murder registered against him.

In 1998 he was accused of killing one Nisar from Mumbai's DN Nagar area. In the same year, he assisted Satish Kalia in the firing incident of a wine shop owner and in the killing of Mohan Mohite.

In 2004 Waghmode accompanied Satish Kalia in the murder of Mahesh Dewadiga.

Nilesh Shendge alias Bablu, 34, a resident of Sion in Mumbai, has three offences of hurting and robbery registered against him.

Arun Daake, a close associate of Nilesh Shendge and a resident of Chembur, has six offences of extortion, Arms Act and causing hurt registered against him.

Sachin Gaekwad, an acquaintance of Arun Daake, also a resident of Chembur, has one offence registered against him.

Abhijit Shinde, 28, another close associate of Nilesh Shendge, has one offence of hurt registered against him.

Mangesh Agavane, known to Anil Waghmode, is a resident of Jogeshwari. 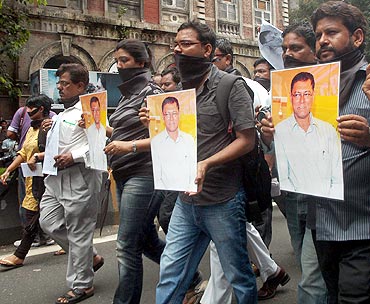 The biggest question that the police seem to be evading at the moment is that of the motive behind J Dey's murder.

The other questions that arise are:

Why did Rajan hire a shooter to eliminate Dey? What was it that Chota Rajan wanted to prevent Dey from doing?

If Satish Kalia could collect the remaining money from an unidentified person in Nalasopara, why did the don ask him to go all the way to Nainital to collect the weapon, given that the same could have also been arranged in Mumbai where Rajan reportedly has a very secure base?

Police claim that a team was formed by Satish Kalia under Rajan's instruction to have a good backup during the execution of the operation, then why was only one weapon procured and used to kill Dey?

One hopes that the cloud of mystery still shrouding the case will be cleared soon.