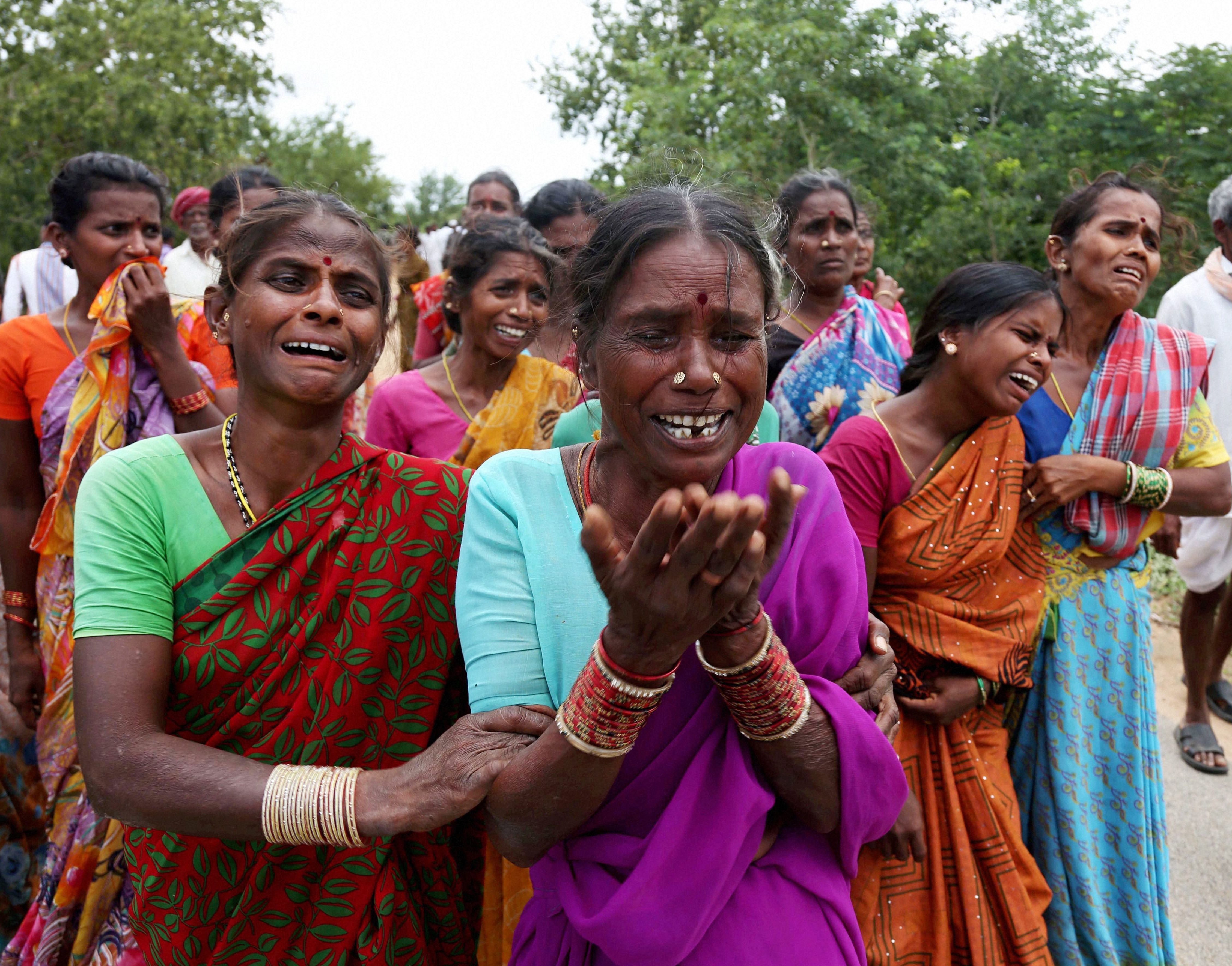 Image: Relatives of the children who died in the bus crash wail.
Photographs: PTI photo

Mangled remains of a school bus with blood stains on it, strewn bags, tiffin boxes, notebooks and text books was all that remained at the accident site of the bus-train collision in which 18 persons, including 16 school children, were killed in Telangana’s Medak district on Thursday morning.

A pall of gloom descended on Islampet village, where most of the boys and girl students had boarded the ill-fated bus which was hit by a passenger train.

The accident spot at an unmanned railway level crossing between Masayipet and Wadiaram railway stations echoed the painful and emotional outpouring of the near and dear ones of the students, in the age group of 5-15 years, whose lives were snuffed out. 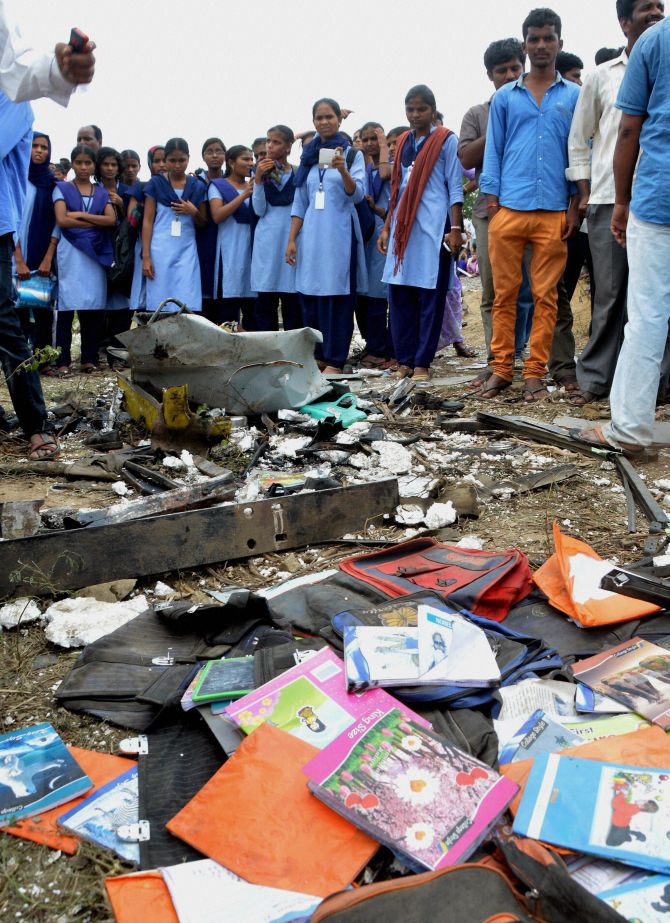 Image: Books and other belongings of the school kids aboard the bus strewn on the ground
Photographs: PTI photo

The locals were the first to rush to the accident spot in large numbers and contributed in the rescue efforts. They tried to remove debris so that children who were entangled in the shattered remains of the bus could be rescued.

“I heard a big thud and came out of my house. I saw the bus was being dragged by the train. Immediately we sent a message for ambulance and reached the railway track. We managed to rescue some students,” said a villager of Masayipet who lives near the accident spot.

“I was sleeping when he (Vamsi) was going to school. My father gave him a send off and dropped to the school bus,” said an inconsolably crying father of Vamsi, who died in the accident. 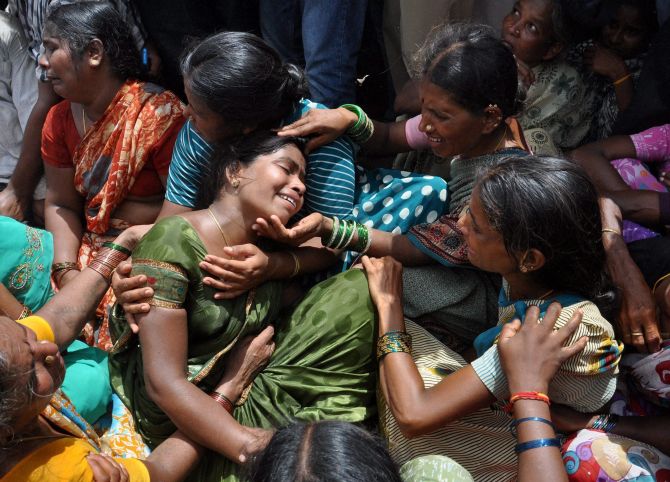 Image: Parents are inconsolable after they hear that their kids are dead.
Photographs: PTI photo

Medak in-charge collector A Sharat said they received reports that the bus driver was talking on his phone while driving at the unmanned railway crossing.

He, however, said it has to be verified and facts will be known only after a thorough inquiry. Reacting to other reports that the driver was hurrying to school, police said these matters are under thorough investigation.

Earlier, hundreds of villagers staged road-blockade and held a sit-in near the mishap site. 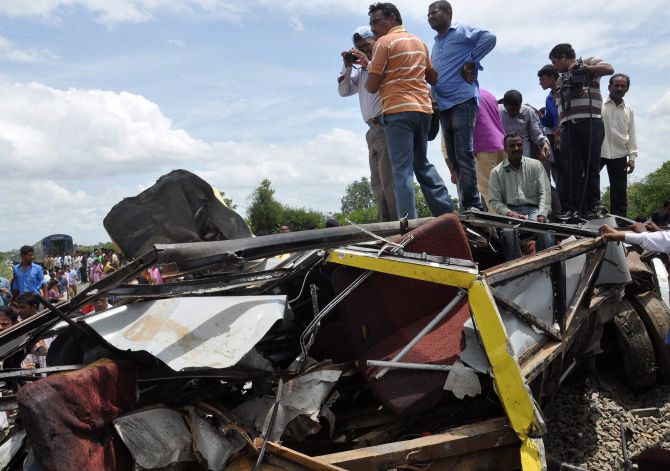 Image: Locals at the crash site after a train collided into the bus.
Photographs: PTI photo

Actor Pavan Kalyan said both Telangana and Andhra Pradesh governments should form a committee with public representatives to look into the issues of the unmanned level crossings in both the states.

“The governments should ensure that such incidents are not repeated in the future,” he said, after visiting a private hospital in Hyderabad where the injured school children were undergoing treatment.

Doctors treating the injured children at a corporate hospital in Hyderabad said they are doing all kinds of medical tests and said several of them had suffered multiple fractures on different parts of their bodies. The children are under observation and some of them are in serious condition, they said.