Sign in  |  Create a Rediffmail account
Rediff.com  » News » AMRI fire: Healthcare is nothing but a lucrative business in Bengal

AMRI fire: Healthcare is nothing but a lucrative business in Bengal 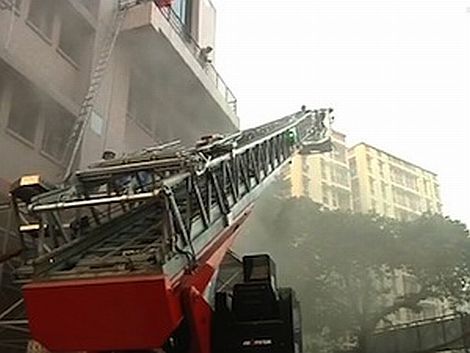 While the debacle in AMRI Hospital is the latest in Bengal healthcare, frequent episodes of medical fiascos have continued unabated, points out Dr Kunal Saha

More than 90 ailing citizens, almost half of the total number of patients admitted, succumbed to a blazing fire in the middle of the night at the Advanced Medicare Research Institute, a premier private hospital in Kolkata, on Friday.

While incidents of patients dying from medical fiascos in Indian hospitals is hardly considered as stunning news these days, scores of helpless patients, many of them admitted in the intensive care unit, suffocating to death in a inferno with no doctor, nurse or medical attendant in sight is chilling news by any standard. It should shock the conscience of every citizen -- even in India.

One may argue that we should get over this horrific episode because it was an aberrant incident.

A culture of deep-rooted corruption is responsible 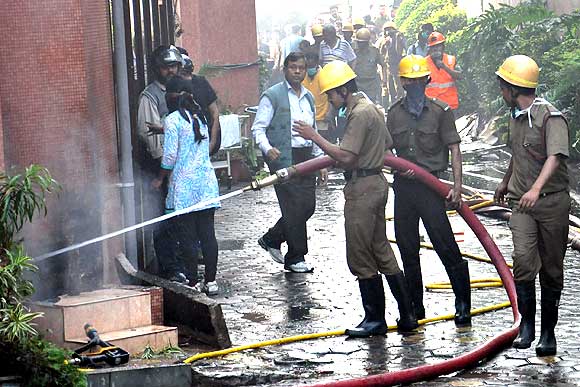 But with reports of major healthcare debacle of one kind or another appearing in the news almost every day, this logic is untenable in India.

Even though this was the first time that a large number of patients died in a hospital from uncontrolled fire, reports of innocent patients dying in hospital from seemingly unimaginable medical catastrophe are hardly an anomaly these days.

A culture of deep-rooted corruption and absolute lack of accountability in the highly affluent and influential medical community that has been accepted by the government is primarily responsible for the abysmal status of healthcare in India today.  The horrific fire at the AMRI Hospital which brought brutal death to so many patients is nothing but another medical disaster which was very much on the cards.

Under pressure due to the intense public outcry, the Bengal government has temporarily cancelled the license of the hospital and arrested the directors of AMRI Hospital for negligent homicide under the Indian Penal Code.

While the present Trinamool Congress government, under the leadership of Mamata Banerjee, is relatively new in West Bengal, this knee-jerk reaction of springing into action and taking some influential members of the medical community into custody in order to quell the media frenzy is not new.

Violation of fire safety codes was not a secret 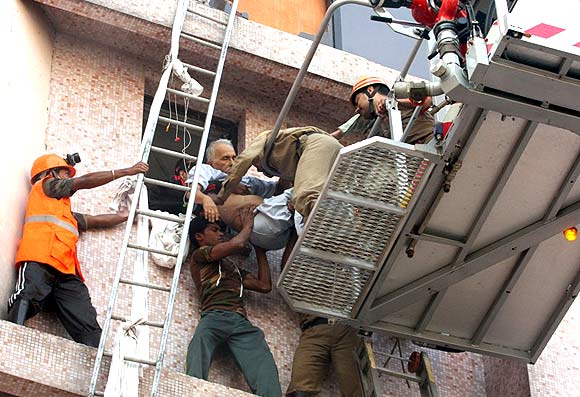 Image: A file photo of the rescue work going on at AMRI Hospital
Photographs: Dipak Chakraborty/Rediff.com

An ineffective government always demonstrates a strong reactive behaviour when put under heavy pressure by the media.  One may remember that after a massive scandal was exposed in 2006 -- revealing that spurious diagnostic kits were supplied to blood banks across West Bengal causing transmission of deadly viruses to unsuspecting patients through contaminated blood transfusion -- the prominent owners of the kit manufacturer, Monozyme India Ltd, were also arrested by the then ruling Left-front government.

While most of the ill-fated citizens who contracted deadly AIDS or Hepatitis viruses through tainted blood have already died, the criminal case against Monozyme is dragging on in a trial court in Kolkata five years later.

More than 90 vulnerable citizens, who came to the hospital to get better, have already died from undeniable reckless behaviour by AMRI Hospital. One has to wait and see how far the criminal cases against AMRI directors are able to bring justice for the unfortunate victims of this horrendous crime.

It is reported that violation of the fire safety codes by AMRI Hospital was not a total secret for the government inspectors who seemingly adopted a lackadaisical attitude to this potential danger. The reason for silence on part of the government regulators against wealthy and powerful medical organisations in India is not difficult to fathom. 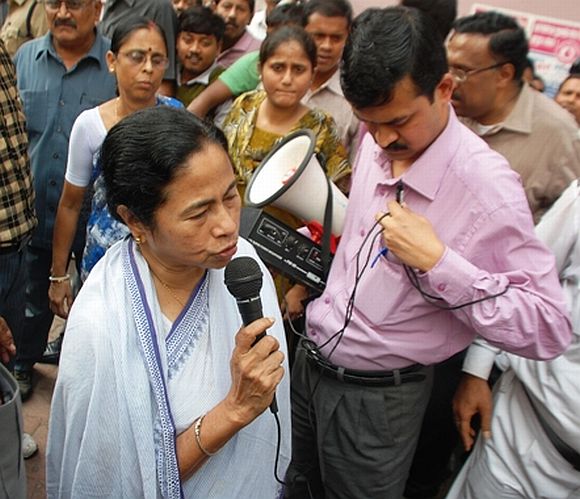 Pervasive corruption in the system is the root cause of public disasters in India. AMRI Hospital's failure to obey fire safety rules has come under scrutiny after paying a heavy price of so many human lives.

But even more frightening is the report that other hospitals in the city are also brazenly violating fire regulations.  The terrifying incidence in AMRI Hospital may be the first of its kind but it certainly is not an unforeseen tragedy.

There are no checks and balances for the rich and hitherto "untouchable" members of the healthcare community in West Bengal.  Although death from a fiery blaze is not a common occurrence in hospitals, reports of innocent patients dying from horrifying medical negligence appear in the news almost on a daily basis. But hardly any doctor is found negligent or punished by the authority.

There can be little dispute that the more than three-decade long reign by the bungling Left-front government has crippled the basic healthcare system in West Bengal. But unfortunately for Bengal residents, there is hardly any sign of hope for building a better healthcare delivery system. 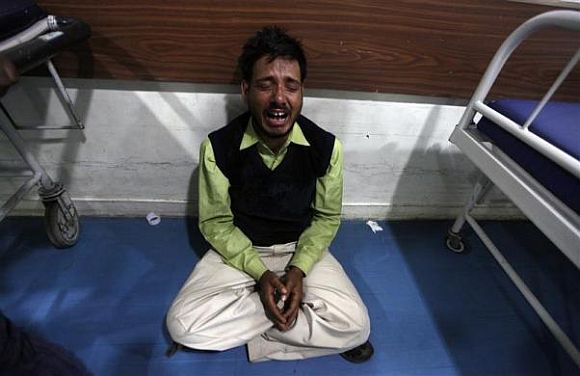 Image: The family members of a victim grieves

While the debacle in AMRI Hospital is the latest in Bengal healthcare, frequent episodes of medical fiascos have continued unabated during the almost year-long rule by the Mamata Banerjee-led government.  Reports of patients dying from alleged "medical negligence" or lack of medical facility appear in the news in West Bengal as frequently as ever.

The West Bengal Medical Council, the highest medical regulatory body in the state that has the exclusive authority to cancel registration of delinquent medicos, has remained completely non-functional as complaints against the negligent doctors continue to pile up in the Council office.

Physical attacks on doctors and hospital vandalism by despairing friends and family of the victim have also continued.  The status of healthcare in rural areas has virtually crumbled with an acute dearth of infrastructure and trained medical personnel.

Scores of babies have died recently on two separate occasions from alleged medical negligence, under the new government's regime, at the BC Roy Children's Hospital. 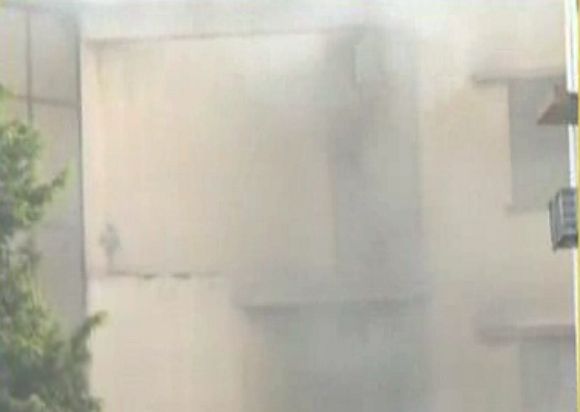 The latest feather in the cap for the new Bengal government is the death of hordes of patients at the AMRI Hospital. The present situation can provide little hope for the hapless patients of West Bengal.

Temporary cancellation of the license of AMRI Hospital or merely arresting the directors may be useful as a public gimmick but only for a short period.

Mushrooming nursing homes, private hospitals and diagnostic laboratories bear undeniable proof that the healthcare industry has become a lucrative and highly profitable business in West Bengal and across India. But unlike other ordinary businesses, the healthcare business literally toys with the lives of innocent citizens.

The appalling fire at the AMRI Hospital is a glaring evidence of this atrocity against humanity. Radical changes are essential for changing the shabby status of healthcare and restoring public trust in our healers.

Dr Kunal Saha is the president of People for Better Treatment, which works for the promotion of better healthcare