Sign in  |  Create a Rediffmail account
Rediff.com  » News » 'I still have two pieces of shrapnel in my body'

'I still have two pieces of shrapnel in my body' 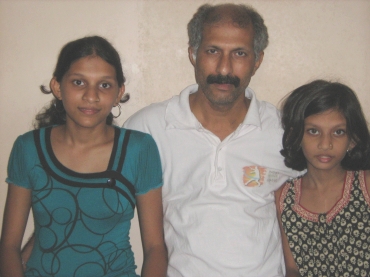 Image: Shirish Kandalgaonkar with his daughters Mrunal and Nidhi
Photographs: A Ganesh Nadar/Rediff.com

His watch has stopped at 6.47 pm, the exact moment a bomb had wreaked havoc in Dadar, Mumbai, and irreversibly changed his life on July 13, Shirish Kandalgaonkar tells Rediff.com's A Ganesh Nadar

He sits quietly in his first floor flat, but he cannot sit for too long. He wears a medical strap across his stomach and chest.

He is a goldsmith but he cannot work now, as his job requires him to sit for long hours in a hunched position.

Shirish Kandalgaonkar, 45, was seriously injured in the blast that tore apart the crowded market area of Dadar in central Mumbai on September 13 this year. Since then, life has changed irreversibly for him and his family.

Shirish has lived in Mumbai all his life. Though he is trained in machine moulding, he decided to join his father and elder brother in their trade of crafting gold ornaments.

"We get work throughout the year. But now, as the price of gold is very high, we get less work," he said.

'I still have two pieces of shrapnel in my body' 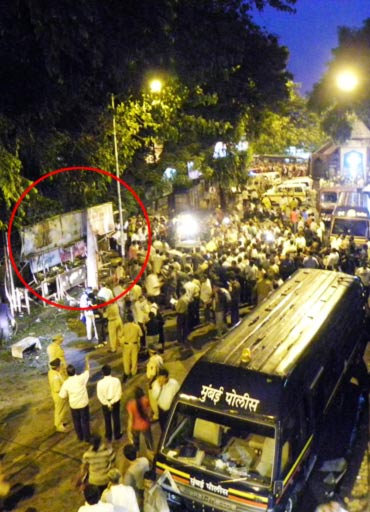 On that day, Shirish, who lives in a joint family, had gone to buy vegetables and medicines. Though he normally rides his cycle to the local market, he decided to walk as it was raining.

He was passing a bus stop when the blast shook the ground beneath his feet.

Shirish narrates the events of that day, "I felt the impact on my body. I was bleeding from my neck down to my legs. One of my ear drums was completely damaged. I fell down. After a while, I got up and called my brother Kishore. The policemen on the spot took me to KEM Hospital in a taxi".

Shirish was impressed with the speed with which he was treated at KEM Hospital.

Says his brother Kishore, "Within 45 minutes, he had undergone an X-ray and other tests to determine the extent of the damage. He was then taken in for surgery".

Most of the shrapnel pieces embedded in Shirish's body were removed. He received 14 stitches on his chest and neck.

"Two pieces of shrapnel remain in my body. One is embedded in my liver and one is near it," he informs softly.

'The doctor told me to come back when I feel confident' 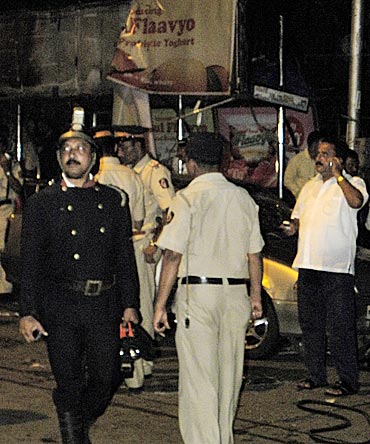 Image: After the blast at Dadar
Photographs: Abhishek Mande/Rediff.com

Doctors at KEM Hospital told him that they would surgically remove those two pieces of shrapnel only if he faced further complications.

"They say that if the shrapnel is removed now, the liver may get damaged," Shirish explains.

But his eardrums suffered the most in the blast.

He has lost the ability to hear in the right ear. In his left ear, he had initially suffered a hearing loss of 60 per cent. After treatment, he has regained his hearing ability partially and the hearing loss in his left ear is 30 per cent now.

So his condition is improving, Shirish informs us with a smile.

Kishore adds, "He cannot hear loud sounds. But if you talk softly, he can hear you".

So when is he going to have his ear operated upon?

"The doctor told me to come back when I feel confident enough to undergo the ear operation," says Shirish.

Doctors have warned him against lifting heavy objects. He is also not allowed to cycle, his favourite mode of transportation.

'I am scared to go out by myself' He recalls, "My younger daughter Nidhi wanted to come with me that day. She wanted to buy a toy. I told her to stay at home as it was raining and promised her that I would get it myself."

"Now I am scared to go out by myself as I am hearing impaired," he says sadly.

Shirish did venture outside his home on Ganesh Chathurthi, to pay his obeisance at the local Siddhi Vinayak temple

He no longer has medicines; all he needs now is rest.

On a sombre note, Shirish notes, "My watch stopped when the blast took place at 6.47 pm. I have repaired it twice but it is still not working."

He shudders at some unmentioned memory of that day, and adds, "At that time I thought I had lost my hand, I was so scared".

Shirish, still shaken from the horror of the blast, will start working when his confidence returns. But before that, he needs to regain his strength and his hearing.

Twice since that day, he has passed that very same bus stop, where the blast had left him hurt and bleeding. His wife has accompanied him both times.

"Now, I am not scared," Shirish admits candidly, a faraway look in his eyes.