Sign in  |  Create a Rediffmail account
Rediff.com  » News » Has govt succeeded in putting Team Anna on the backfoot?

Has govt succeeded in putting Team Anna on the backfoot? 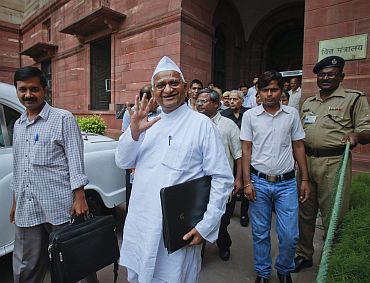 Image: File picture of Anna Hazare and his associates coming out of the finance ministry building after a meeting of the joint drafting committee of the Lokpal Bill
Photographs: Reuters Sahim Salim in New Delhi

The war between Team Anna and the government over the Jan Lokpal Bill is getting uglier by the day, so much so that the real purpose of the movement -- that of introducing an effective Lokpal Bill -- has been sidelined, reports Sahim Salim.

Prominent members of Team Anna are under attack -- with allegations ranging from fund misappropriation to income tax bond violation to controversial views on Kashmir.

While members of Team Anna claim that this is all a strategy devised by the ruling Congress to derail the anti-corruption movement, the party terms their fears as "paranoia".

"If at all certain members of non-governmental organisations are having any misgivings (of being targeted by the government or the Congress party), they are at best in the realm of paranoia," Congress spokesperson Manish Tewari told rediff.com.

Still, one wonders at the timing of the controversies surrounding Team Anna at present. 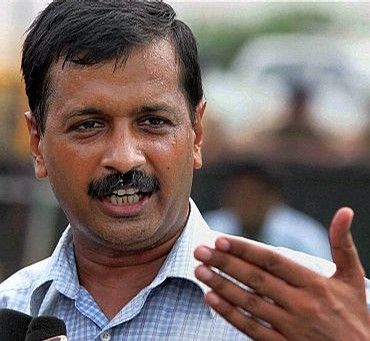 "It is pretty obvious what they (Congress) are doing. Every day, they level one allegation or the other against a member of Team Anna. It is a clear case of victimisation, witch-hunting and mudslinging," Team Anna member Shazia Ilmi told rediff.com.

"The Congress party or any other government functionaries are not interfering in whatever is going on within the civil society members. Whatever is happening is between them. Charges against (Arvind) Kejriwal have been levelled by (Swami) Agnivesh and there is no intervention from our side in whatever else is happening," Congress party spokesperson Rashid Alvi said.

Two prominent members of the core committee, Rajinder Singh and PV Rajagopal, resigned in protest of what they termed as 'political agenda' adopted by Team Anna when they campaigned against the Congress party in the Hisar by-elections.

One allegation after another 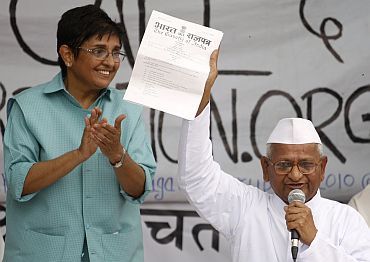 Image: Kiran Bedi with Anna Hazare during the latter's fast to press for a stronger Lokpal Bill in New Delhi
Photographs: Reuters

Then came the allegations of fund misappropriation against Team Anna member and former IPS officer Kiran Bedi, who accepted that she had bought discounted air tickets, while charging full business fare to her hosts. She defended this saying that surplus money went to her NGO.

Then suddenly, former Team Anna member Swami Agnivesh, after weeks of silence, levelled allegations of fund misappropriation against Kejriwal. He accused Kejriwal of diverting funds from the movement to his own trust.

And finally, Kejriwal was slapped with another income tax notice, asking him to clear his dues of Rs. 9.5 lakh for allegedly violating bond conditions. (Kejriwal was Indian Revenue Service officer employed by the IT department)

The legal expert in the team, Prashant Bhushan, whose future is to be decided in the upcoming Team Anna core-committee meeting on Saturday, is fighting his own battle after being thrashed by rightist goons for his remarks that 'there should be a referendum in Kashmir.' 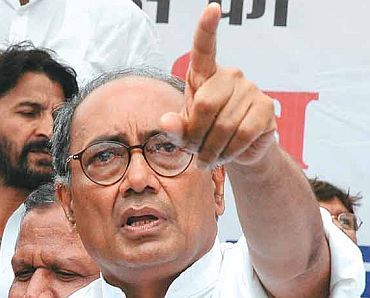 The Congress party, which has been at the receiving end of the Anna Hazare-led anti-corruption movement, has been adopting a good cop-bad cop routine through all this.

While leaders like party General Secretary Digvijaya Singh are vocal in their attacks against Team Anna, others like Union minister Salman Khurshid are softer in their comments.

Alvi did not name anyone when commenting on the controversies surrounding Team Anna. "People will lose faith in such anti-corruption movements if their main leaders have to answer questions about their own conduct," he said.

Digvijaya Singh has been, however, taking several digs at Team Anna. He mocked Bedi's declaration that she was prepared to return the surplus money to her hosts, saying that if that was the case, even (jailed former telecom minister) A Raja can come out of jail by returning the money.

He also reiterated his belief that the Bharatiya Janata Party and the Rashtriya Swayamsevak Sangh were behind Team Anna after BJP leader Varun Gandhi came to Kejriwal's defense following Agnivesh's allegations.

If this is a two-headed strategy to deal with Team Anna, it seems to be the most effective one for the Congress party.

There is an apparent rift within the team and for the first time since Team Anna took on the government in April, the credibility of its members is being questioned.

"Yes, there is no doubt that Congress's anti-Team Anna campaign has intensified since Hisar. You have to look at the timing of all this. Some newspapers and news channels have been against the movement since the very beginning and these agencies are airing stories against the members," Shazia said. 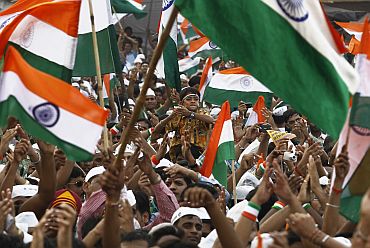 Image: Supporters of Anna Hazare at the Ramlila Ground in Delhi
Photographs: Reuters

"Why now, is my question. There is a level of viciousness in the renewed campaign against us. They are levelling constant allegations against us, and in the process, they are delaying the process of introducing the Jan Lokpal bill," she added.

"They (Congress) keep coming up with statements made by the BJP or RSS in favour of us. They have not produced one statement or letter written by any Team Anna member asking for BJP's support. This is a movement and all sections of the society may support it," Shazia said.

Another Team Anna member, who did not wish to be named, said that in the core-committee meeting on Saturday, Congress's anti-Team Anna strategy will be discussed.

"In their campaign, they are trying to tarnish the credibility of Team Anna members. We will discuss in the meeting how to counter this. It is true that the campaigning has intensified since the Hisar election, but the ruling class had launched a smear campaign against us from the very beginning, which has ranged from doctored CDs to cooked up land controversies," the member said.

One thing is clear -- if this is a strategy, it seems to be working.

The media spotlight is on the credibility of Team Anna members, instead of being on the ruling alliance to introduce an effective Lokpal Bill.