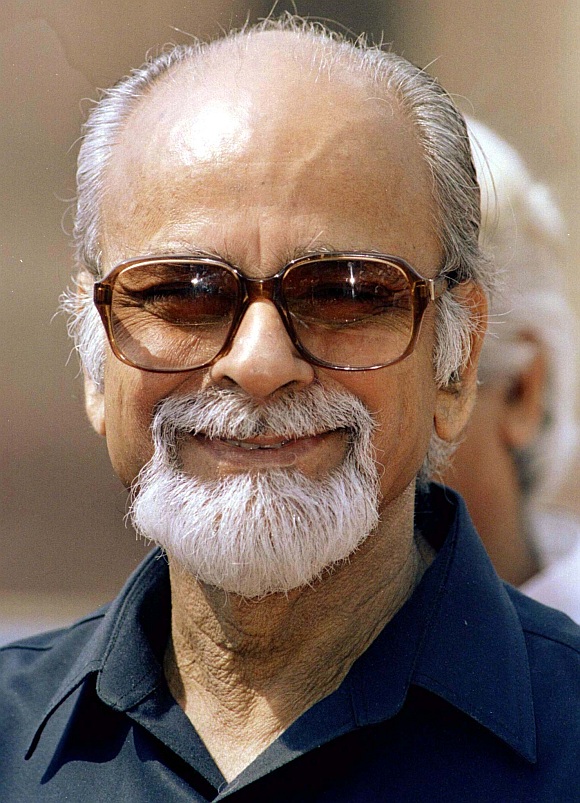 Four days before he would have turned 93, Inder Kumar Gujral, who steered the country as prime minister at the head of the United Front coalition in the late 1990s, passed away. Gujral was essentially a gentleman politician, gracious and sophisticated in his dealings. He built relationships across the political spectrum, with his unusual ability to get along with people, from the Left to the Right.

Though he cut his political teeth in the Communist Party of India, people like Congress leader Sitaram Kesri and Telugu Desam chief N Chandrababu Naidu -- and not his old comrades like Harkishen Singh Surjeet (who rooted for Mulayam Singh Yadav as prime minister) -- backed him for the prime ministership in 1997. Gujral was among the disappearing breed of political leaders who had a background in the freedom struggle.

His political baptism really came at the age of ten when his parents, influenced by M K Gandhi and Lala Lajpat Rai, had taken him to the 1929 Lahore Congress -- where the party had first the cry of 'Poorna Swaraj'. It left a deep impression on his mind. But in his youth, he was attracted to Marxism, though he became disenchanted with it much later with the goings on in the Soviet Union.

Sucheta Kripalani, the first woman chief minister in India (Uttar Pradesh), brought him into the Congress and he caught the eye of Indira Gandhi. From Indira Gandhi's backroom boy, he rose to become India's prime minister at the head of the United Front government in 1997.

'Make anyone chief minister, make him' When Gujral was appointed India's ambassador to the USSR in 1976, it was seen as a punishment, for Indira felt, that he, as her information and broadcasting minister, had not acted tough enough with the media in the early days of the Emergency.

It was only in the 1980s when he drew close to Vishwanath Pratap Singh after Singh quit the Congress, that Gujral found political relevance again. There were many meetings held in his home in the months before the Janata Dal came to be formed, though he had differences with Singh on the 'Mandal' decision to give reservations to Other Backward Classes in government jobs, which brought about a paradigm shift in the politics of north India.

Gujral used to tell a lovely story about those heady days when he was part of Indira's kitchen cabinet.

Indira was unhappy with the continuation of then Haryana chief minister Bhagwat Dayal Sharma who was close to then Union home minister Gulzari Lal Nanda, for Nanda was resisting Sharma's removal. She sent Gujral to prevail upon Nanda.

Gujral persuaded Nanda that there was little point in annoying Indira Gandhi. As he was leaving Nanda's house, he pointed to one of those waiting in the verandah, "Make anyone chief minister, make him. That does not matter, only remove Sharma."

Nanda called him a few minutes later and asked him whether he was serious about the person he had pointed to, to be made chief minister. That is how Bansi Lal became chief minister of Haryana and later the defence minister of India.

Gujral saw the country make the transition from one party rule to coalition governance, a process in which he took an active part. He would often remark that had Morarji Desai, Chandra Shekhar, V P Singh, H D Deve Gowda and himself not quit the Congress, they could never have become prime ministers.

Their rise as prime ministers, at different times, was part of the process of the Congress' decline, and the rise of regional forces, leading to coalition governments at the Centre in 1977, 1989, and 1996-1997, and later under the Bharatiya Janata Party's Atal Bihari Vajpayee.

India could not sign the CTBT, he told Clinton 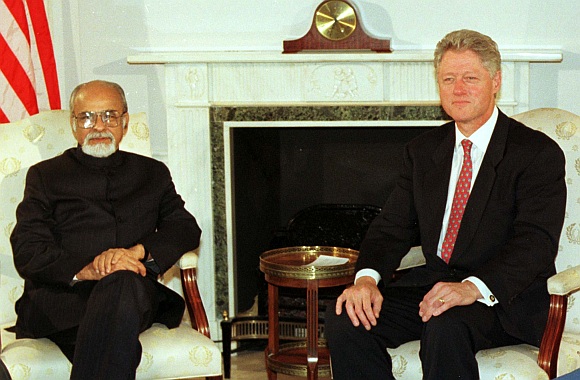 Gujral's contribution will be remembered in the realm of foreign policy and the role he played to improve India's relations with its neighbours. As prime minister, he mooted the 'Gujral Doctrine', which was a set of principles, its essence being that India needed to be more accomodating towards its smaller allies, to buy peace with them so as to be able to contain the influence of its larger neighbours, Pakistan and China. His premiership led to an improvement in India's relations with its neighbours.

He especially reached out to Pakistan and soon after taking over as prime minister, called Nawaz Sharif, his counterpart in Pakistan, so as to break the ice at the SAARC summit in Male which followed shortly thereafter, and the picture of the Punjabi jhappi between the two men was long remembered afterwards.

He was criticised for being a weak prime minister, as he had to follow the dictates of powerful chief ministers, whose regional outfits were part of the coalition, forming the United Front government. It was at the time when the very concept of the 'prime minister's prerogative' underwent a change.

When he took over from Deve Gowda, who was dethroned by Sitaram Kesri, then the Congress president, which had been propping the UF government, he inherited the Deve government and was not allowed to change ministers. He only managed to induct four women ministers, and Jayanthi Natarajan was one of them, as minister of state for civil aviation. He instructed the civil aviation secretary to work more with her than the controversial minister C M Ibrahim, who Gujral could not replace. The so-called 'weak' prime minister was quite firm when he had to withstand the American pressure on India to sign the Comprehensive Test Ban Treaty.

He first set about creating a national consensus on the CTBT, and then he told thenAmerican President Bill Clinton, quite firmly, when he went to the United States in September 1997, that India could not sign the CTBT, when the country was surrounded by nuclear weapons. Clinton, he said afterwards, became silent. 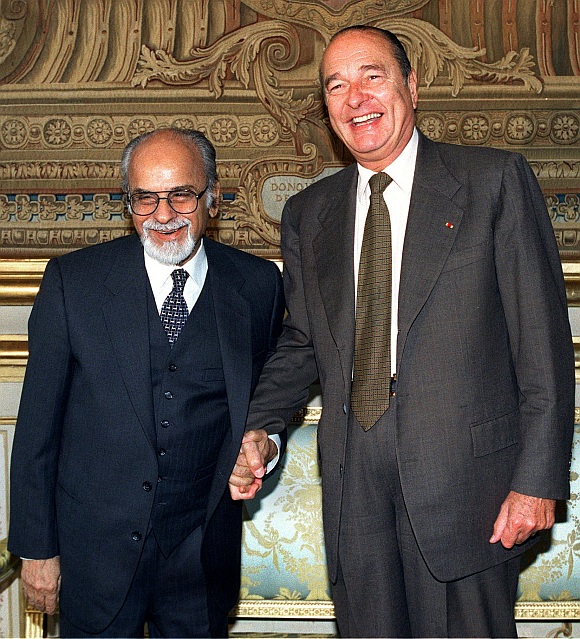 What is not so well known is that Gujral contemplated a nuclear explosion during his premiership, and had his term not been cut short by the Congress' withdrawal of support to his government, a different story might have unfolded.

On January 26, 1998, French President Jacques Chirac was the chief guest for the Republic Day celebrations in New Delhi. Gujral, President K R Narayanan, Vice-President Krishan Kant were sitting with Chirac in one of the rooms at Rashtrapati Bhavan before going out for the 'At Home' reception. Gujral, according to those in the know at the time, turned to Chirac and asked what the French would do if India conducted a nuclear explosion.

Chirac is believed to have replied that initially France may oppose it, but they would support India. Often, he found innovative ways to deflect pressure that would come on the prime minister from the regional chieftains during the course of the coalition government.

There was the time when he came under pressure from Mulayam Singh Yadav to sack the Uttar Pradesh government when Mayawati withdrew support to the BJP government on October 18,1997. She wanted the UP assembly to be dissolved and elections to be held. Mulayam's party, a constituent of the UF ministry, wanted the government headed by Kalyan Singh sacked and to explore the possibility of forming an alternative government. Gujral was opposed to this because he apprehended that it would encourage horse trading. But the pressure on him by the UP leaders was mounting by the hour.

That evening, after a banquet at Rashtrapati Bhavan for a visiting dignitary, according to Gujral -- and he has recorded this in his autobiography -- he, the President and vice-president were huddled together in the Rashtrapati's private chambers. Gujral, President Narayanan and Vice-President Krishan Kant enjoyed a rare rapport.

The President shared Gujral's view that that the central government should not advise the governor to dissolve the assembly, for the Supreme Court had laid down guidelines that the majority test had to be carried out on the floor of the House, and that the withdrawal of support per se did not add up to a breakdown of the Constitution.

India will will remember Inder Gujral as a son of India Gujral told his waiting UF colleagues that Narayanan was opposed to this course of action, and if the President returned the Cabinet's recommendation, it would make the going rough for the United Front government. That had the desired effect on most, though not on Mulayam.

But then, realising the flurry of activity on the other side, Mayawati went back to supporting Kalyan Singh, to keep her flock intact! Gujral had a knack for being able to look at the humorous side of things. One of the stories he would tell with great flourish was about his visit to Patna, when he had stayed at the circuit house.

He found paan-chewing, rough and tough looking young men hanging outside the room all the time. He asked a group of them, ". Aap log kya karte ho? (What do you gentlemen do for a living?)" They replied, looking at him quite disdainfully, "Hum log politics karte hain!" (We are in politics, what else!)"

Friends recall that once when Vasant Sathe was creating trouble for the Janata Dal, Gujral, who continued to have good relations with Congressmen, even though he had quit the party, asked him, "Kya dikkat hai, kuch kaam vaam nahin kiya tho bata do. (What is the problem? If we have not done some work, tell us!)"

As the country bids him a final farewell, it will remember Inder Gujral as a son of India, who was secular and had a left of Centre bent of mind, one who could make tactical and strategic compromises for his political survival, but who did not compromise when it came to the national interest.