Sign in  |  Create a Rediffmail account
Rediff.com  » News » From farmers to students, Ramdev finds support in one and all

From farmers to students, Ramdev finds support in one and all 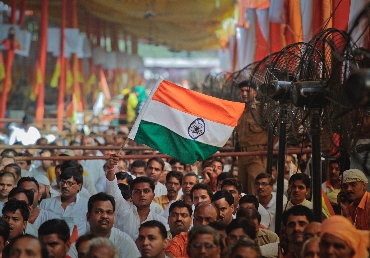 Image: Thousands turned up at the Ramlila grounds on the first day of Ramdev's fast in New Delhi
Photographs: Reuters
Supporting Baba Ramdev were many of his ardent supports. From students to farmers to office-goers -- people from all walks of life -- turned out at the Ramlila Ground on Saturday, tough in their resolve to join the fight against corruption. Sahim Salim reports.

People from across India poured into Ramlila Ground on Saturday to show their solidarity to Baba Ramdev, who is on an indefinite hunger strike against corruption. Battling the severe heat people from all walks of life -- from farmers to office-goers, housewives to students -- stood by the anti-corruption guru and many of them even observed a fast along with him.

But there was one a stark contrast between protestors who turned up at Jantar Mantar in April when Anna Hazare went on a fast unto death and Ramdev's supporters. Most gathered at the Ramlila Ground were old followers of the yoga guru -- people who had absolutely blind faith in him. Many of them were associated with Ramdev's trust across India.

'We are united by Baba's trust'

Image: Devender Singh Negi along with other supporters of Baba Ramdev

A group of seven men, all of them volunteers for Ramdev's trust in Solang, Himachal Pradesh were in Delhi to back their anti-corruption guru's campaign. One of them was a school principal, while another ran a garment business. "Yes, we were united by his trust. But we came here on our own accord. Baba's demands are just and will benefit the country. We are here to show our support," said one, Sanjay Kumar Mishra, who runs a textile business.

"Corruption is an issue that affects each and every Indian and that is why we are here. Yes, we are Baba's followers, but today's cause is corruption," added Devender Singh Negi, who runs a school in Solang.

The group arrived in the capital in their private cars early on Saturday. 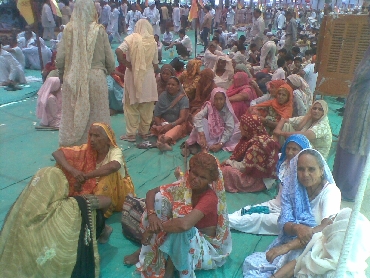 Image: 30 housewives from Haryana were camping at the ground since Friday night

A little ahead, a group of 30 housewives from Gadoli in Haryana squatted in front of an air cooler. The have been camping at the ground since Friday night.

"Can't we, as women, extend support to Baba's noble cause," asked one, Sita Devi.

"We came here on our own. We are all housewives, but are equally concerned about the rampant level of corruption in this country. If Baba's movement succeeds, then even our village will benefit. He has said that poverty will be eradicated from this country and it will be," added Arti Mishra said.

'I will stay here as long as Baba continues to fast' Most came in groups but Ajay Kashyap, a final year MA student from Kanpur did not need company. "I don't belong to any group and I am on my own. I am here as a concerned citizen," he said.

Kashyap said that he had arrived in Delhi on Friday night and would stay as long as Baba continues to fast.

'If we don't stand up against corruption now, then we never will' 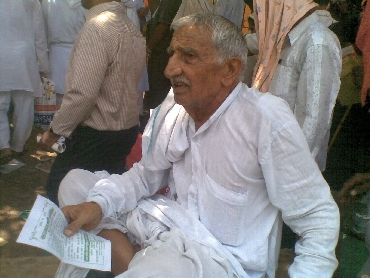 A farmer from Palval, Amit Chaudhury left behind all work and rushed to Delhi as he heard that Ramdev was going on a fast.

"I just had to come. My family and I are devout followers of Baba Ramdev. They also wanted to come, but there was no one to take care of our land back home. So I came here on my own. I am here because I am concerned. As Baba said, if we don't become aware now and stand up, we will never be able to stand up. So here I am standing," exclaimed Chaudhury.

'Baba is the only one who can save us' A group of people flocked around a painting of what looked like an Indian map in the clutches of a monster. Explaining the painting Geeta Sharma, who hails from Gwailor, said, "I have tried to show that India is in the grip of a monster, which is corruption. It shows that foreign forces like Pakistan are capitalising on the state of affairs in our country."

"And here's Baba, who is the only one who can save us," she added pointing at a portrait of the yoga guru.

The painting was made by Pooja, who also joined Ramdev in his fast. "The painting specially for the campaign and that I will dedicate it to Ramdev's trust," she said.