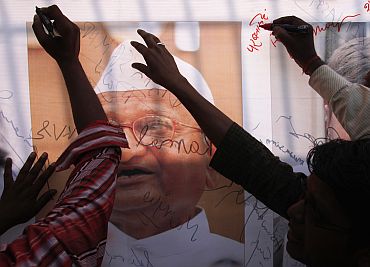 Image: Supporters of Anna Hazare sign a banner with a portrait of Hazare outside the Tihar jail in New Delhi
Photographs: Reuters

Suspecting a 'foreign' hand behind Anna Hazare's anti-graft movement, Congress on Wednesday raised questions on the US' statement that India would exercise 'appropriate democratic restraint' in dealing with peaceful protest and asked the government to inquire how a 'lone' civil rights activist is drawing support.

"US never supported any movement in India since its independence. For the first time, the US said that Anna Hazare's movement should be allowed and there should be no obstruction to it. What was the need for the US to give this statement?" party spokesperson Rashid Alvi told mediapersons at the All India Congress Committee briefing.

"It needs to be considered whether there is any power which is supporting this movement which wants to destabilize not only the governmnet but the country. We need to take the statement of the US seriously," Alvi added.

'Why is US supporting Anna's movement?' 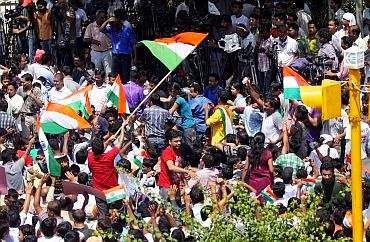 Asked whether it is the official position of the party and whether he is saying all this on the party's behalf as UPA government has many times in past been attacked by the Left over an alleged pro-US tilt more so after India signed the nuclear deal, Alvi said, "All that I have said I have said on behalf of my party."

Asked whether Congress has made preliminary inquiries before making this allegation suggesting that the US was behind Anna's agitation, he said 'government should inquire about it and find out the truth.'

Alvi at the same time said 'there are some forces also within the country (that are supporting Hazare's agitation from behind), which needs to be found out....I am not criticising the US or any other country. But we will have to find out the truth, why US is supporting this movement?'

"Anna is alone. Anna has no organisation but only a few friends standing by him. The big question is how this movement came into existence? How people in such a large number come out to support him?" the Congress leader said.

'Anna cannot do it alone through his own resources' 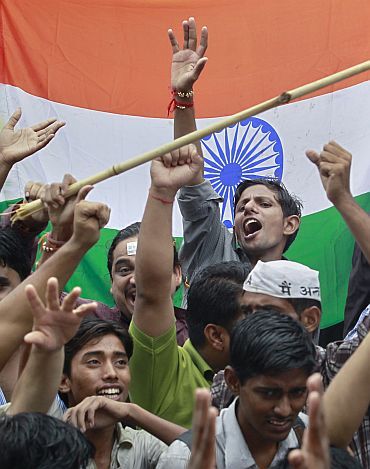 Ahead of the proposed August 16 fast against corruption by Hazare, the US State Department spokesperson Victorial Nuland had hoped that India would exercise "appropriate democratic restraint" in the way it deals with peaceful protest.

The remarks drew a sharp response from India which termed as 'needless' and after that Nuland had on Tuesday exuded confidence in India's ability to manage its 'internal situation' in consistent with democratic values.

To a specific question on whether he sees foreign hand behind Hazare's agitation, Alvi said, "I am also saying the same thing. What forces are working behind this movement needs to be exposed."

Noting that various forces with different ideologies have joined Anna's agitation on only one issue of Lokpal, he appealed to the government on behalf of Congress to find out the forces behind Hazare's agitation adding, "Anna cannot do it alone through his own resources."

'Hazare is blackmailing the government' 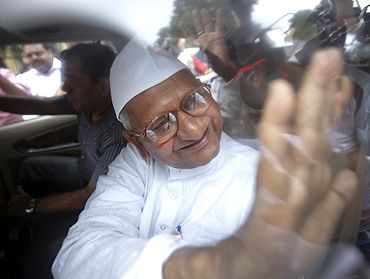 Alvi also referred to Prime Minister Manmohan Singh's reply in Parliament on Tuesday and said that at a time when the country was emerging as a powerful country, it will have to be contemplated whether there is any power which wants to destablise not only the government but the country.

He said more than 100 countries attained independence when India got freedom but none of them could reach a place where India reached. "There are some forces in the world which do not want to see us strengthening. Which are those forces behind this movement need to be found out."

Alvi accused Hazare of 'blackmail' on the issue saying Parliament is supreme and laws cannot be made in Jai Prakash Narayan Park, the proposed venue of Hazare's protest.

"If Anna Hazare says that pass our bill or we will go on fast, it is nothing but blackmail," he said.

The Congress spokesperson regretted the decision to arrest Hazare, saying, "There are occasions in the history of nations when some decisions have to be taken in national interest even if the heart does not allow it."

"Anna Hazare's arrest was a similar step which the government had to take out of compulsion," he said adding the Constitution also permits reasonable conditions to be put while granting the freedom of expression.