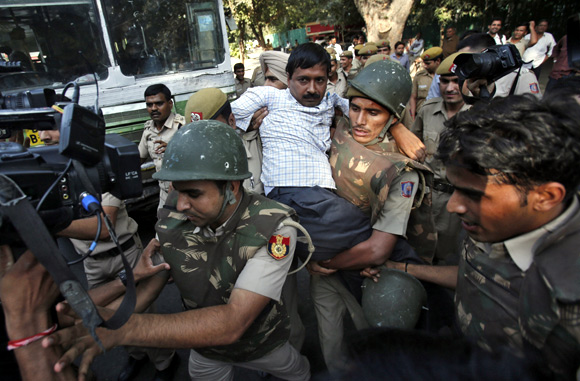 It's all very well to make shrill accusations and mount street protests. But winning elections is a different ballgame altogether. Veenu Sandhu goes behind the scenes to see how Arvind Kejriwal's yet to be formed political party is trying to win friends and influence people.

New Delhi's staid Constitution Club was bustling with activity on October 2. A crowd of over a thousand (entire families, youngsters in backpacks, journalists) had turned up expecting India Against Corruption, or IAC, heavyweights Arvind Kejriwal, Manish Sisodia and lawyers Shanti and Prashant Bhushan to announce the launch of their political party.

Among the 20 or so who shared stage with them that day was Subhash Ware, former national president of Rashtra Seva Dal, a Maharashtra-based "socialist and secular youth organisation" started in 1941. Ware, 48, was introduced to the crowd, but he didn't speak. Nobody sought him out even after the day-long event, replete with patriotic songs and long speeches, ended.

Ware was on stage that day because he is a vital cog in Kejriwal's political game-plan. Ware's organisation, which is non-political but allows its members to participate in political activities, is connected with about 15 "movements" of fishermen, farmers, landless workers and tribes across Maharashtra. Each has 4,000 to 5,000 members or volunteers. It's a ready workforce which IAC hopes to bond with.

On October 21, next Sunday, armed with the vision document for the new political party which Kejriwal and Co released on October 2, Ware will discuss IAC's plans with the leaders of these movements.

"The document says that people's movements can be associated with the new political party while keeping their independent identity. And this appeals to us," says Ware over phone from Pune.

Similar meetings will be held in other states like Andhra Pradesh and Tamil Nadu. 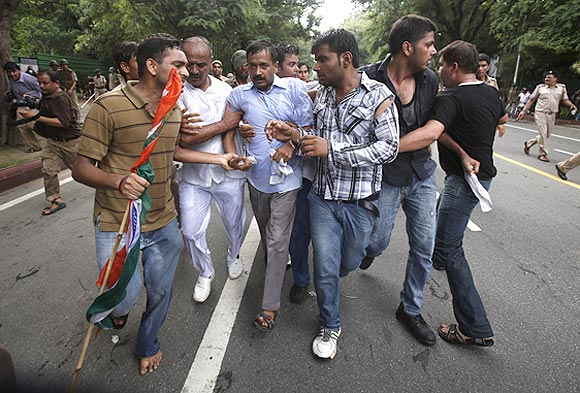 Away from the media glare, from vociferous attacks against the powerful and the moneyed, the foundation of a new political party is being laid. The party that will stem out of IAC intends to contest the Delhi elections in 2013 and the 2014 Lok Sabha polls. With just a year to go for the first battle, Kejriwal has to build a cadre of volunteers and sympathisers quickly. Tying up with grass-root organisations is one way out.

For the last several months, Yadav has been travelling across the country meeting leaders of various movements.

"IAC has a single-point agenda -- to fight corruption. People's movements have a broader range of agendas. IAC is a young, energetic movement with many young people. The others are older, much experienced movements. I see a convergence of vision between the two."

Yadav claims Lok Sangharsh Manch, which is active in northern Maharashtra and southern Gujarat, has shown interest in joining.

In Karnataka, talks have been initiated with Sarvodaya Karnataka, a conglomeration that includes Karnataka Rajya Raitha Sangha and Dalita Sangharsha Samithi, and is led by Kannada litterateur and social activist Devanur Mahadeva.

In Tamil Nadu, a political outfit of women has shown interest. Unions of fishermen and agricultural workers in Andhra Pradesh; tribes in Orissa who are campaigning against Posco and in Niyamgiri; Chhattisgarh Mukti Morcha which claims to work for the uplift of workers and peasants; some groups from Assam; Bharatiya Kisan Union (Punjab and Haryana); organisations of Dalits and tribes of Bihar are some others that have been in talks with IAC functionaries in Delhi for the last few months.

Some of them -- Internationalist Democratic Party, active in Jammu & Kashmir, Punjab and Rajasthan, and Samajwadi Jan Parishad, a party working in eight states -- shared the stage on October 2.

"While we are trying to explore all movements, the priority is those which are in an advanced stage of politicisation and open to a political role," says Ajit Jha, who is coordinating with these organisations from Delhi. 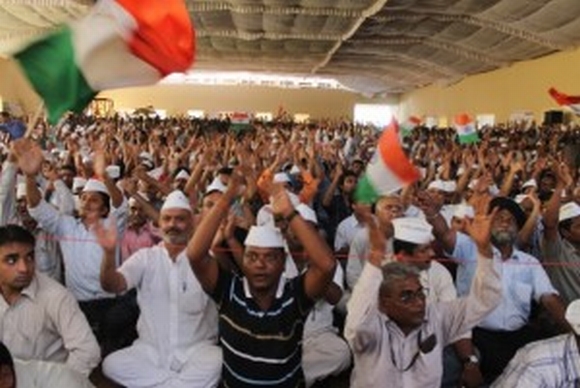 While the membership drive for the party will be formally launched only after November 26, Kejriwal's people have started a drive to recruit volunteers. At the October 2 meeting, a registration counter was set up to enroll volunteers.

Young IAC members were seen talking to youth in the hall that day to get a foothold in colleges and universities. IAC functionaries are already active in campuses across Delhi.

Ware says that for the October 21 meeting in Maharashtra, his organisation too is reaching out to college students and youngsters. An IAC helpline, run by four volunteers who man the phones from 10 am to 6 pm, guides those who want to register or puts them in touch with local IAC contacts across the country.

In the states, IAC members are going down to districts, blocks and even villages to mobilise support.

On the job in Uttar Pradesh is journalist-turned-activist Shazia Ilmi.

"Work has started in 11 states," she says, listing a few: Madhya Pradesh, Bihar, Haryana, Karnataka and Tamil Nadu. Besides enrolling volunteers in Uttar Pradesh, Ilmi's task is to see how to set up screening committees.

These committees will identify candidates with a 'clean record', verify their antecedents and, if need be, put forth their names before the people. There will then be an open vote which will decide the candidate. Tickets to contest elections will be handed out then and there.

To win votes, Kejriwal knows he has to stay in the news. Perhaps that is why he is going all out to pull one skeleton out of the cupboard after another: Robert Vadra-DLF, DLF-Haryana, Salman Khurshid-Zakir Hussain Memorial Trust, etc. (So far, only Khurshid has threatened legal action against Kejriwal.) Even his arrest on Sunday will keep him in the public eye.

Kejriwal has promised more revelations on October 16. A parallel bijli-paani satyagraha, where he and other IAC members climb up electricity poles to fix power connections snapped by the authorities for non-payment of bills, is on.

Each of these issues is researched thoroughly before a press conference is called and bombshells dropped. Digging out reports and scrutinising documents to back allegations is the task of IAC's research cell, which mainly comprises volunteers and is headed by an unnamed "MBA with a keen eye for numbers". 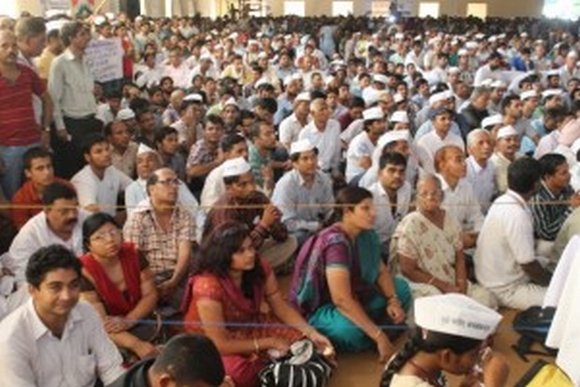 A volunteer, speaking on condition of anonymity, says that they usually zero in on current issues and research takes about two weeks.

"If the matter relates to the ruling party, once it is exposed it becomes extremely difficult to get more information on it," he says.

In a recent interview with Business Standard, Kejriwal had revealed that he got the DLF-Vadra papers scrutinised by chartered accountants before he went public.

"We are just lifting this corporate veil," he had said. (The details had actually been published by The Economic Times in March 2011.)

Back in Delhi, Prashant Bhushan says the work on framing the party's constitution is on.

"There are some visible people like Arvind, Yogendra Yadav, Manish Sisodia, Gopal Rai and I who're working on it. And there are those who are not so visible," he says. That's the think-tank of the soon-to-be-born party -- no Anna Hazare, no Kiran Bedi in it. (The break happened in the September-19 meeting, where eight of the 55 present, including Hazare, Bedi and Santosh Hegde, opposed the idea of a political party.)

Those who have watched Kejriwal closely in the last year or two insist that Hazare was a mere figurehead, the brains were always Kejriwal and the Bhushans.

Prashant Bhushan gives some idea of what the party's constitution could look like.

"People today have no role in policy-making. We need to decentralise power so that if an issue concerns a village, then it is decided by the villagers. Even Panchayati Raj has not been implemented properly so far," he said.

This could strike a chord with rural voters. Congress veteran and former panchayati raj minister Mani Shankar Aiyar agrees that panchayats are not being involved in development programmes planned by the Centre.

"Kejriwal came to me with his document on gram swaraj (village self-governance). At the conceptual level, he is completely right."

Aiyar says that if Kejriwal launches a movement for effective gram swaraj within the framework of the Constitution, "then I am completely with him". But Kejriwal isn't doing that, he adds, and is digressing instead.

A bigger concern is money. IAC has a corpus of over a crore, but that won't go very far.

The Election Commission has currently capped election expenditure in parliamentary constituencies in bigger states like Uttar Pradesh, Bihar, Andhra Pradesh and Madhya Pradesh at Rs 40 lakh. And at Rs 16 lakh for an assembly constituency. 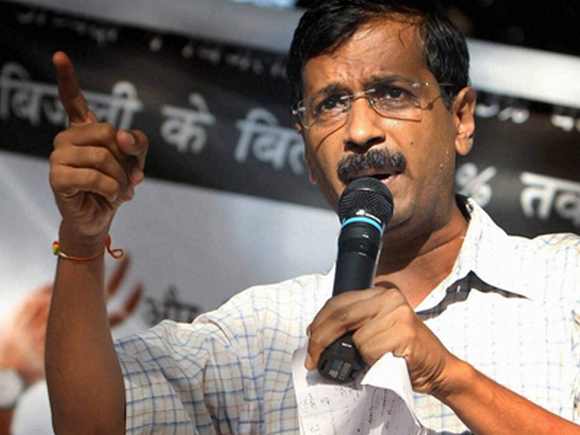 "But," says a member of a political party, "to win even a municipal election you have to dish out something like Rs 25 lakh." His party tried an experiment in two neighbouring wards. In one, it spent Rs 5 lakh, fielded a doctor and held free health camps.

"We got just about 10 per cent votes and lost." In the other it spent Rs 25 lakh and distributed liquor, "and we won." That is the bitter reality.

Like Kejriwal, he too was determined to contest elections without handing out money or alcohol. There was no shortage of volunteers -- his decade-long movement had ensured that.

In the 2009 assembly elections in Andhra Pradesh, Narayan's party contested 234 seats with just Rs 4.9 lakh. Narayan travelled in trains to keep costs low. There was immense goodwill, but only one candidate won.

"And that was me," says Narayan.

Getting winnable candidates is a big challenge. "The ones who know they can win the election will most likely join an established party." It's a catch-22 situation.

A glaring example of this was seen in the 2012 Punjab elections. Manpreet Singh Badal, a career politician and former finance minister of Punjab, who launched the People's Party of Punjab after he fell out with his uncle, Chief Minister Parkash Singh Badal, did not get even a single seat even though he had the masses rallying behind him.

Some days ago, Manpreet Badal received a call from Sisodia, a former journalist who has been with Kejriwal for years now, and the politician from Punjab landed in Delhi. Late on Wednesday afternoon, the two met. It's premature to predict if an alliance is in the works, but a feeler has clearly been sent.

A volunteer at the IAC helpline says they are not accepting donations for the time being.

"If we accept donations now, questions will be raised about how that money is being used."

Once the party is launched, he says, donations will be accepted. "All the money will go into a bank account and we will put the name of the donor with the amount of donation on our website."

Donations from corporations, he says, will be "a strict no. They will then expect favours from our party."

With his freewheeling accusations, Kejriwal has undoubtedly gained visibility in the media, but is it good enough to fetch votes? Not everybody feels that a Kejriwal "wave will be generated".

"India has over a thousand political parties and only a few are recognised. They [IAC] are still at a very preliminary stage," he says.

To be recognised by the Election Commission, the party has to be in active politics for five years, has to win some seats and get at least six per cent of votes in an election. To qualify as a national party, it has to fulfil this condition in at least four states. That's indeed a tall order.

The party, for Kejriwal, has just begun.