FAQ: How media in India is regulated 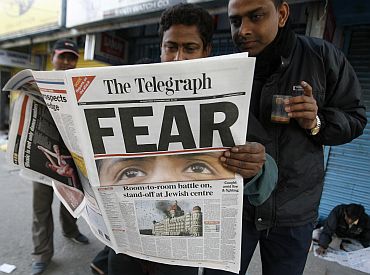 The media in India is mostly self-regulated. The existing bodies for regulation of media such as the Press Council of India, which is a statutory body, and the News Broadcasting Standards Authority, a self-regulatory organisation, issue standards which are more in the nature of guidelines.

Here we present a FAQ on the present model of regulation of different forms of media.

What is the Press Council of India?

The PCI was established under the PCI Act of 1978 for the purpose of preserving the freedom of the press and of maintaining and improving the standards of newspapers and news agencies in India.

'To build a code of conduct for journalists and news agencies' 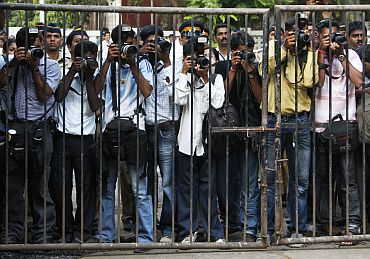 Image: Press photographers in Mumbai stand behind a fence for security reasons as they take pictures of Belgium's Queen Paola in a school in 2008
Photographs: Francois Lenoir/Reuters

What is the composition of the PCI and who appoints the members?

What are its functions?

The functions of the PCI include among others (i) helping newspapers maintain their independence; (ii) build a code of conduct for journalists and news agencies; (iii) help maintain "high standards of public taste" and foster responsibility among citizens; and (iv) review developments likely to restrict flow of news. 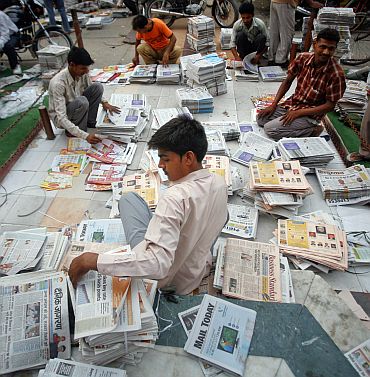 Image: Distributors sort through newspapers before selling them during early hours in Noida.
Photographs: Parivartan Sharma/Reuters

What are its powers?

The PCI has the power to receive complaints of violation of the journalistic ethics, or professional misconduct by an editor or journalist. The PCI is responsible for inquiring into complaints received.

It may summon witnesses and take evidence under oath, demand copies of public records to be submitted, even issue warnings and admonish the newspaper, news agency, editor or journalist. It can even require any newspaper to publish details of the inquiry. Decisions of the PCI are final and cannot be appealed before a court of law.

What are the limitations on the powers of the PCI?

The powers of the PCI are restricted in two ways.

1. The PCI has limited powers of enforcing the guidelines issued. It cannot penalise newspapers, news agencies, editors and journalists for violation of the guidelines.

'Unlike the PCI, the censor board does not have the power to issue guidelines' 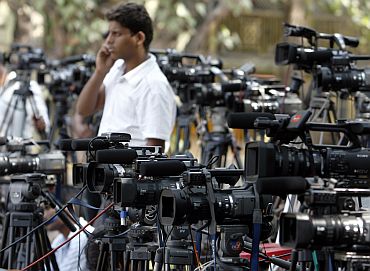 Are there other bodies that review television or radio?

For screening films including short films, documentaries, television shows and advertisements in theatres or broadcasting via television the Central Board of Film Certification sanction is required.

The role of the CBFC is limited to controlling content of movies and television shows, etc. Unlike the PCI, it does not have the power to issue guidelines in relation to standards of news and journalistic conduct.

Program and Advertisement Codes for regulating content broadcast on the television, are issued under the Cable Television Networks (Regulation) Act, 1995. The district magistrate can seize the equipment of the cable operator in case he broadcasts programs that violate these codes.

Certain standards have been prescribed for content accessible over the internet under the IT Rules 2011. However, a regulatory body such as the PCI or the CBFC does not exist. Complaints are addressed to the internet service provider or the host.

Radio channels have to follow the same Programme and Advertisement Code as followed by All India Radio. Private television and radio channels have to conform to conditions which are part of licence agreements. These include standards for broadcast of content. Non-compliance may lead to suspension or revocation of licence.

'News channels are governed by mechanisms of self-regulation' 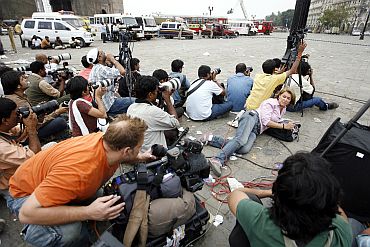 Image: Photographers and members of the media cover a gunfire at the Taj Hotel in Mumbai during the 26/11 attacks
Photographs: Desmond Boylan/Reuters

Is there a process of self regulation by television channels?

Today news channels are governed by mechanisms of self-regulation. One such mechanism has been created by the News Broadcasters Association.

The NBA has devised a 'Code of Ethics' to regulate television content. The News Broadcasting Standards Authority, of the NBA, is empowered to warn, admonish, censure, express disapproval and fine the broadcaster a sum upto Rs 1 lakh for violation of the code.

Another such organisation is the Broadcast Editors' Association.

The Advertising Standards Council of India has also drawn up guidelines on content of advertisements. These groups govern through agreements and do not have any statutory powers.

Is the government proposing to create a regulatory agency for television broadcasters?

In 2006 the government had prepared a Draft Broadcasting Services Regulation Bill, 2006. The bill made it mandatory to seek license for broadcasting any television or radio channel or program.

It also provides standards for regulation of content. It is the duty of the body to ensure compliance with guidelines issued under the bill.