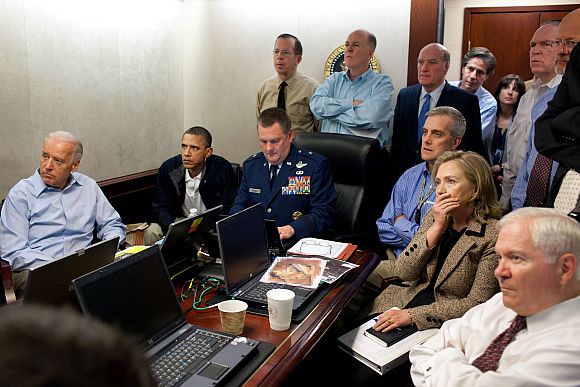 The anxiety not to undertake any operation from the Indian side that might trigger off panic reactions by Pakistan against India continues to be an important element in US covert action planning in this region, says B Raman.

RedState, a largely visited web site of the US, describes itself as "the most widely read right of center blog on Capitol Hill, is the most often cited right of center blog in the media, and is widely considered one of the most influential voices of the grassroots on the right.... At RedState, we are conservatives in primaries and Republican in general elections and we aim to win. RedState's day to day efforts are led by its Editor, Erick Erickson."

Coinciding with the anniversary of the 9/11 terrorist strikes by Al Qaeda in the US homeland, it has carried an article dated September 10, 2012, by one Jeff Emanuel titled "India, Abbottabad, and Osama bin Laden: Did New Delhi Assist the US on Operation Neptune Spear?'

The article is a commentary on the book titled "No Easy Day" written by Mark Owen (assumed name), one of the Navy Seals who formed a member of the team that successfully raided the hide-out of Osama bin Laden at Abbottabad in Pakistan on the night of May 1/2, 2011, and killed OBL. The book is his account of the operation code-named Neptune Spear carried out by a team of the Navy Seals under the supervision of the Central Intelligence Agency (CIA), then headed by Mr Leon Panetta, the present Defence Secretary. 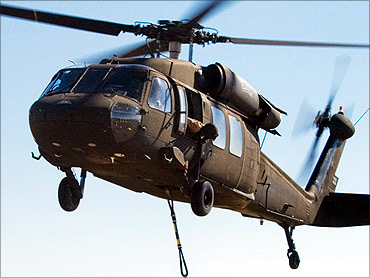 After the successful raid, Owen was decorated along with other members of the team, but seems to have taken premature retirement. The reasons for his premature retirement are not known. It is not clear whether it was due to any grievances he might have had in connection with the recognition of his role in the raid.

Mr Panetta has been quoted by the US media as having demanded action against Owen for having disclosed sensitive operational secrets in his book. This would indicate a large measure of truth in his account, if not the entire truth.

The article by Jeff Emanuel has caused considerable interest in India because of its inference, after studying the flight path of the helicopters that carried the Navy Seals as indicated by Owen, that one of the helicopters crossed Indian air space over Jammu and Kashmir on its way to and back from Abbottabad.

To quote the relevant observations of Emanuel:

"The fourteenth page of images in No Easy Day contains a map showing the routes taken by the two flights of helicopters: the Black Hawks taking the assaulters to Abbottabad, and the MH-47 Chinooks carrying a quick reaction force (QRF) and forward area refuelling point (FARP) team. While the latter flew due east to a staging area northwest of Abbottabad, the former flight is shown on Owen's map as crossing over Pakistan's eastern border with India before looping around and approaching Abbottabad from the southeast, rather than approaching directly from the west (or west-northwest). 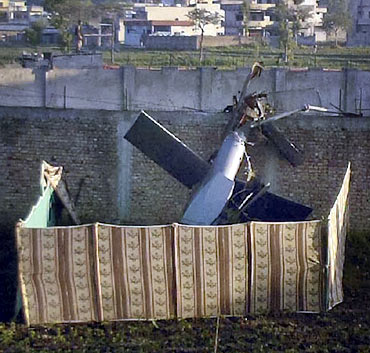 "This apparent use of Indian airspace on the infiltration route raises some obvious questions, including:

1. What foreknowledge (if any) did the Indian government have about the mission into Pakistan?

2. If clearance to use Indian airspace was requested (and granted), what was the Indian government told, either about the real objective of Operation Neptune Spear or as a cover story?

"What other assistance did India provide, either in terms of aerial diversion or supplying the US with guidance on the best route back into Pakistan? (It seems clear that the latter would involve providing the US some insight into India's intelligence and route planning for a possible strike on Pakistan should hostilities resume between the two states.)

It's important to note at this point that this discussion is based on a single low-detail graphic from an account that was neither vetted nor confirmed by the US government. At no point in the text of No Easy Day is the route to Abbottabad discussed (as opposed to the return trip, which is dealt with in some detail); in fact, Owen writes, most of the team slept on the way in.

"Owen's map appears to define Pakistan's eastern border as the western boundary of Kashmir, the disputed territory that is bisected into Pakistani and Indian-administered territories by the Line of Control, established in 1972, and it is difficult to tell whether the image was intended to show that the helicopters' route crossed the LOC. However, the route appears to take the Americans in the vicinity of Uri, in Indian territory.

"It goes without saying that crossing over the LOC would have been an exceedingly dangerous undertaking, and one which, while crossing eastward, would almost certainly have required providing prior notice to the Indian government. Likewise, passing back across the LOC into Pakistan would have been a dangerous undertaking, as that is the direction in which Pakistan's air defenses are largely oriented. This goes back to point 3 above: if the assaulters' route to Abbottabad included crossing over the Indian border and back again, it seems likely that weaknesses in Pakistan's eastward-oriented air defences known to India were communicated to the US and exploited on this mission."

Comments on the analysis 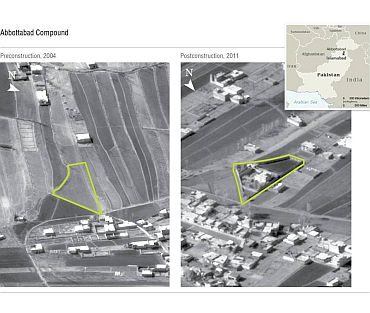 I have the following comments on the analysis of Emanuel:

(a). In covert operations of this kind, the principle of restrictive security is strictly followed. The crew of the helicopters would not know what the Navy Seals would be doing after they are dropped on the ground. The Navy Seals would not know what flight path the crew would be following. How did Owen come to know the details of the flight path and the exact points at which the helicopter would be crossing the Line of Control (LOC) twice while going to Abbottabad?

(b). In planning operations of this nature involving air and missile action, the US is always worried that if the Pakistanis detect the action they may misinterpret that the action had been originated by India and this could lead to a war between the two nuclear powers. They never undertake any secret action from the Indian side. When the US launched the Cruise missile attacks on OBL's camps in Afghanistan in October 1998, Anthony Zinni, the then head of the Central Command, flew to the Chaklala Air Force base in Pakistan and informed Gen. Jehangir Karamat, the then Pakistan's Chief of the Army Staff (COAS), of the impending action. He later said that he did not want the Pakistanis to think that the missiles were of India and launch a counter-attack on India.

(C). After the 9/11 terrorist strikes in the US Homeland, the A B Vajpayee government then in power had offered to the US the secret use of Indian Air Force bases for retaliatory strikes against Al Qaeda and the Taliban. The Bush administration declined the offer due to fears of unpredictable reaction by Pakistan resulting in a nuclear war between India and Pakistan.

(d). The anxiety not to undertake any operation from the Indian side that might trigger off panic reactions by Pakistan against India continues to be an important element in US covert action planning in this region.

(f). After the 26/11 terrorist strikes in Mumbai, there was a discussion in India by well-informed persons about India's option of mounting a copter strike on the training camps of the Lashkar-e-Tayiba (LET) in Pakistan-Occupied Kashmir. The US pressured India not to undertake such an operation due to its fears of unpredictable reactions of Pakistan. It was reported at that time that the Indian Special Forces were confident that they would be able to undertake copter-borne strikes in POK without being detected by Pakistani radars. Were the details of the flight path which the Indian Special Forces intended using if they had been permitted by the political leadership to undertake the strikes shared with the CIA for its operation on Abbottabad? 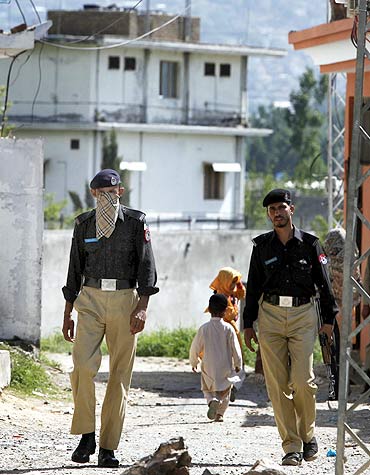 Image: Policemen patrol a street near the compound where Osama bin Laden was killed in Abbottabad
Photographs: Faisal Mahmood/Reuters

Owen's account will neither be proved correct nor disproved till the US one day declassifies the details of the operation. Till then, it will be difficult to find definitive answers to the points raised by me.

In this connection, please see my following comments in my article dated May 3, 2011, on the operation.

"Till now the indications are that it was an exclusive US operation. Since it involved the ingress of the US special forces into Pakistani territory by air in helicopters, it was likely that Gen Ashfaq Pervez Kayani, Pakistan's Chief of the Army Staff (COAS), was informed before the helicopters with the special forces took off from Afghanistan for the raid even though US officials have reportedly been asserting that Pakistan was informed only after the helicopters had taken off at the end of the operation. When the Bill Clinton Administration launched the Cruise missile strikes on the training camps of Al Qaeda in the Jalalabad area of Afghanistan in 1998 they followed a similar procedure. Gen Anthony Zinni, the then Commanding Officer of the US Central Command, flew to Islamabad from a US naval ship and informed Gen. Jehangir Karamat, the then COAS, about the impending raid. The US did so to make sure that Pakistan did not interpret that the missile had been launched by India and order a missile strike against India. A similar precaution was likely to have been taken this time too. Moreover, Abbotabad, an important military garrison town, has high air defence cover. It was important to prevent a messy air defence action by Pakistan against the US helicopters if its radars had detected their approach. The entire operation lasted a little over two hours. During this period, one of the helicopters crashed. It was blown up and destroyed by the special forces.

A newsletter disseminated by a retired US naval officer says: "Source says actual crash sight was on Kakul Road, Abbottabod, Pakistan just down from the Pakistan Military Academy exercise grounds. See image for road, which was reportedly blocked off by local security after the incident. Folks in the city mentioned on Twitter at the time that the action was very, very close to the PMA." This would indicate that during the entire operation on the ground, which lasted over 90 minutes if one excludes the time taken by the choppers for their to and fro journey, the Pakistani security forces did not intervene and try to find out what was going on. The local police blocked the stretch of the road where the helicopter had crashed to prevent onlookers rushing there till the Americans had destroyed the chopper. All this clearly shows that the Pakistanis must have had advance knowledge of the operation and had instructions from above not to intervene."