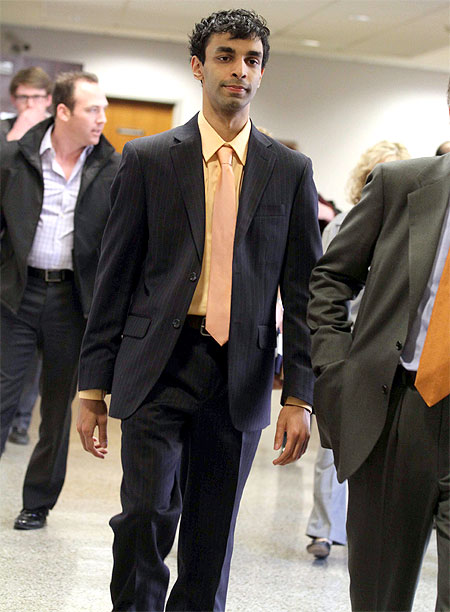 On Wednesday, in the ongoing hate crime trial against Dharun Ravi in New Jersey, Judge Glenn Berman instructed the jury not to hold the fact -- that the 20-year-old former Rutgers University student had not taken the stand to defend himself -- against him.

Ravi is accused of spying on his Rutgers University roommate Tyler Clementi kissing a male guest through his webcam on September 19, 2010, and trying to set up the webcam again two days later. Prosecutors say Ravi targeted Clementi because he is biased against gay people and hence committed a hate crime.

The case, being tried in the supreme court in New Brunswick, New Jersey, has attracted national media attention after Clementi committed suicide by jumping off a bridge a few days after the alleged spying occurred.

Hours before Clementi's death, Ravi had sent a note to him apologising for his action and asserting that he had nothing against gays.

On Wednesday, the demeanour of Ravi changed considerably after Judge Berman's instructions.

He could be seen smiling a lot as he walked the corridor of the court room. It was as if some burden had been lifted as the jury began its deliberation. Even though the possibility of him going to jail for 10 years or even deported to India after a brief sentence in the prison weighed in the air, at least for a few hours or perhaps a few days, he did not have to hear charges repeated against him in the invasion of privacy and bias intimidation case. 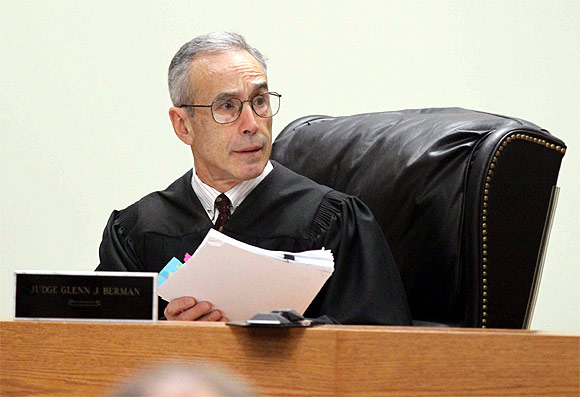 Ravi also faces the charges of hindering apprehension, tampering with a witness and tampering with evidence, among others. Legal experts believe he could go to prison only if he is convicted of one of the two bias intimidation charges he faces.

Ravi could be convicted of bias if the jurors agree that he invaded Clementi's privacy and that Clementi reasonably believed the crime was committed with purpose to intimidate him because he is gay.

Clementi had left his home for the dorm a few weeks before the alleged spying began. He was 18 and his date, who he met through an Internet site, was just around 30. 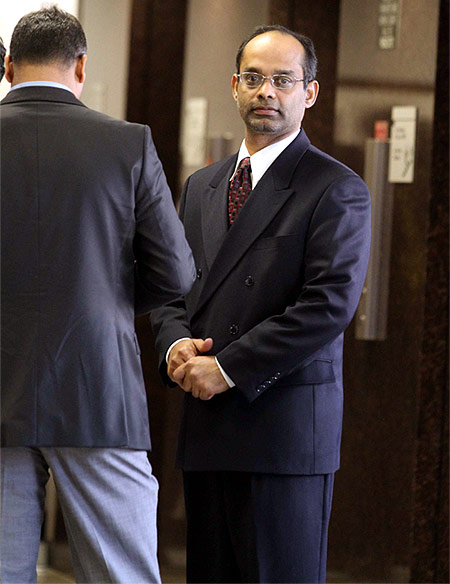 But even while admitting to a detective that he had violated Clementi's privacy, Ravi had said that he set up the web camera to make sure he could see if Clementi's gay lover was going to steal Ravi's electronic possessions. His lawyer has argued that he did not act out of malice or seek to humiliate and intimidate Clementi.

Last year, prosecutors offered Ravi, who is in the US legally, a plea bargain that called for no prison time but hundreds of hours of community work. They also offered to help Ravi, who came to America as a boy and is still a citizen of India, to avoid deportation. But his parents decided to hire high-profile attorney Steve Altman, and agreed to the suggestion of a friend of the family to go in for a legal fight.

Ravi, who left Rutgers soon after the scandal, has remained in the family home in Plainsboro, New Jersey --- a few miles from his Rutgers campus room that he shared with Clementi --- for more than 16 months.

Some legal experts believe that authorities could go to an immigration judge seeking to have Ravi, who has no criminal record, deported to India if he is given an year-long sentence or more, news agencies reported this week. His family comes from Chennai. 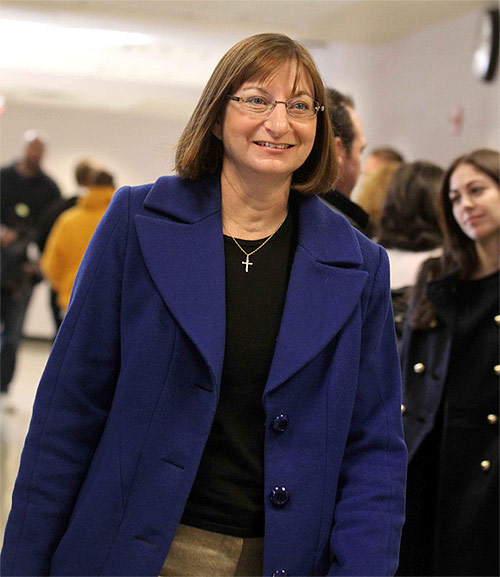 More than 50 journalists have been crowding the court room since Tuesday.

"The media can now enter," announced the sheriff who first let Clementi's family, including mother Jane, enter the courtroom, followed by a contingent of 16 of Ravi's family members who approached the room from the opposite direction of the courtroom.

"But do it slow and nice. Don't kill each other," added the sheriff.

"Given the high-profile nature of this case, you would think the court would provide both the families separate rooms during the break," said a journalist. "But we see them on the opposite sides of the corridor, avoiding any eye contact.'

The jury, which had not come to a conclusion on Wednesday evening, has been told by Judge Berman that they should unanimously decide guilty or not guilty on each of the five sub-sections under every bias intimidation charge.

After spending two hours of deliberations, jurors asked Judge Berman to repeat a bias intimidation statute that he had instructed them early in the morning.  He had also told them they can only find Ravi guilty of bias intimidation if he is found guilty of the charge of invasion of privacy.

The trial has attracted national attention because Clementi's suicide ignited a national dialogue on cyber-bullying and harassment of gay youth.

Earlier this week, yet another voice questioned the value of the court case against Ravi.

"Surely, something must be done about his disrespectful invasion of Tyler Clementi's privacy," mused Joseph C d'Oronzio, a retired Columbia University professor who was also the Raoul Wallenberg Visiting Professor in Human Rights at Rutgers University

"But criminal retribution -- the quest for maximum punishment -- will ill-serve justice and certainly not resolve the salient issues in this case," he stated.