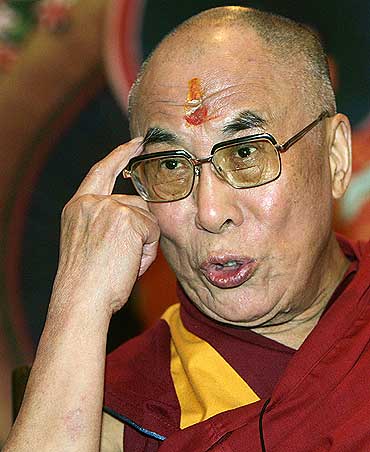 Image: The Dalai Lama at a news conference in New Delhi
Photographs: B Mathur/Reuters
The Dalai Lama, who had escaped to India as a young man, has been the torch bearer of the struggle for freedom of a small religious minority from the oppressive communist regime in China.

He was just 15 years old when he became the 'head of state' of Tibet in 1950 and over six decades since then, he has brought his cause for rights of his people on the global stage.

Vilified by the Chinese as a "wolf in monk's robe", the 75-year-old leader has taken a march over his critics by announcing his decision today to step down as the political head of the exiled Tibetan movement.

A Nobel Peace Prize winner, the Dalai Lama had earlier talked about retiring and in his address this morning on the occassion of 52nd anniversary of Tibetan National Uprising Day, he said Tibetans needed a leader elected freely by the Tibetan people to whom he could devolve power. 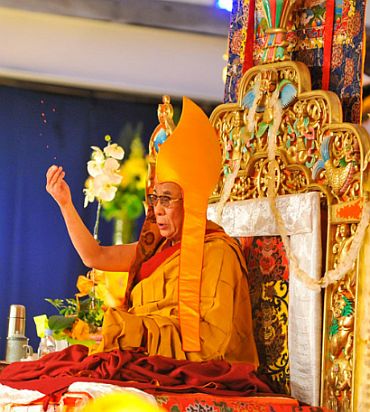 Image: The Dalai Lama performs a prayer in Dharamsala, where he lives

After China invaded Tibet in 1949, he was appointed as the Tibetan political and spiritual leader a year later. Seeking rights for his people, the Dalai Lama had gone in 1954 to Beijing, then known as Peking, to hold peace talks with top Chinese leaders like Mao Zedong, but his efforts failed.

In March 1959, as Chinese troops crushed an attempted uprising in Tibet, he fled into India.In the last 60 years, the Dalai Lama has advocated a non-violent campaign against the Chinese control of his homeland even though some of the factions within the movement have had a more radical agenda.

He was awarded the Nobel Peace Prize in 1989 for his consistent opposition to the use of violence in his quest for Tibetan self-rule.The Chinese leadership views him as a "splittist", although he has repeatedly stated that his goal is for Tibetan autonomy rather than independence.

The Dalai Lama was anointed when he was four 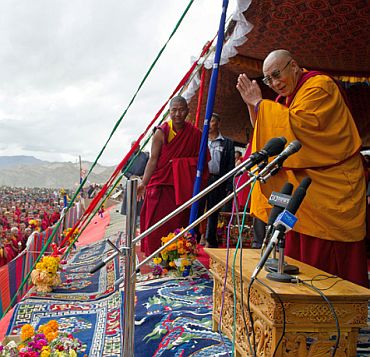 Born on July 6, 1935, he is one the most well-known Buddhist monks. He was the fifth of 16 children born to farmer parents. He was educated at a monastery and went on to achieve the Geshe Lharampa Degree, a doctorate of Buddhist philosophy. It was in 1950, when he was 15, that the troops of the newly-installed Communist government marched into Tibet


When he was two years old, a search party of Buddhist officials decided that he was the reincarnation of the 13 previous Dalai Lamas and he was anointed before he turned four.

The Dalai Lama's temporal duties were largely ceremonial and he had pronounced himself "semi-retired" following the first direct election in 2001 of a prime minister as the formal head of the exiled Tibetan government.

In his address on Thursday, the Dalai Lama acknowledged "repeated and earnest" requests from within Tibet and outside to continue as political leader, but appealed for understanding of his decision to step down. 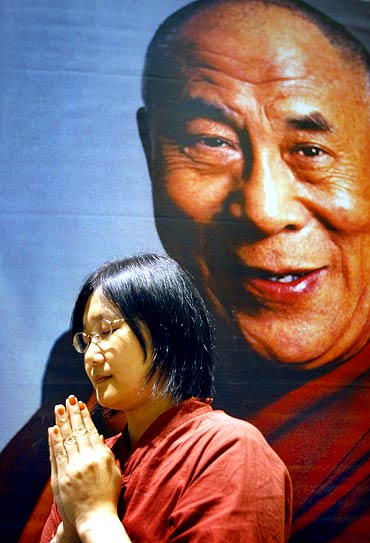 Image: A follower prays in front of a picture of the Dalai Lama
Photographs: Nicky Loh/Reuters
The Dalai Lama has maintained a hectic schedule meeting world leaders to espouse his cause and delivering lectures in top institutions despite his advancing age.

As part of his efforts, he persuaded the UN General Assembly to adopt resolutions in 1959, 1961 and 1965 calling for the protection of the Tibetan people.

In 1987, amid protests in Lhasa against the large-scale relocation of Han Chinese into Tibet, the Dalai Lama had proposed a five-point plan, in which he had called for the establishment of Tibet as a zone of peace.

He has continued to seek dialogue with Beijing. Talks between the two sides broke down in 1993 and there were no more for nearly a decade. Discussions resumed in 2002 and have continued intermittently but with no apparent progress.

One of the worst unrests broke out in Lhasa in 2008 with the Tibetans claiming that nearly 200 people had been killed in alleged crackdown by the Chinese security forces. Beijing had, however, put the number of the dead in the violence at 18.

Talks in November 2008 ended with China apparently hardening its position and denouncing the Tibetan proposal for autonomy as a bid for "disguised independence."