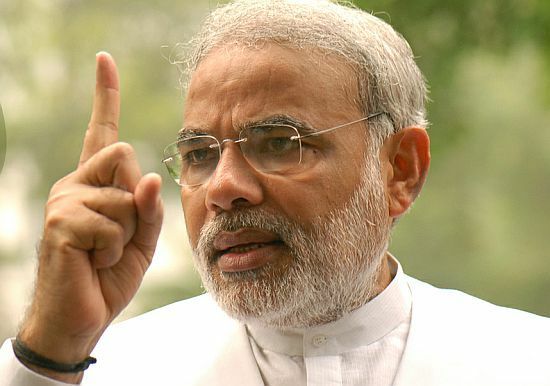 In an exclusive Interview to CNN-IBN's editor-in-chief Rajdeep Sardesai, Gujarat Chief Minister Narendra Modi has accused the Centre of treating Gujarat as an 'enemy' state. He also now claims that he never questioned expenses on Sonia Gandhi's health, but only on her foreign travel.

Modi also claimed that he was only focused on the Gujarat elections and that reports of his prime ministerial ambitions and wanting to move to Delhi after the Gujarat assembly elections were media speculation.

He precisely kept mum on the questions of Bihar Chief Minister Nitish Kumar and campaigning in Bihar and apologising for 2002 riots. He also assured the Bharatiya Janata Party of a spectacular win in this assembly election, even bigger, he claimed, than 2007.

We present the transcripts of the interview

This is the 150th year of Swami Vivekananda Jayanti. Our government has taken up youth programmes since last January. We are celebrating this year as the year of the youth. Our main objective is skill development. In 21st century India's 65 per cent population is below 35yr of age. We have to tone their skills and strengthen their hands. To compete with China we have to develop the skills. With this basic objective we have planned this youth programme. Our youth today feels inspired by two names -- Shaheed Bhagat Singh and Swami Vivekanand.

On using Vivekanand's name for politics

This programme is running since last one year. I've not decided on Vivekanand's 150th anniversary. This is a good thing. This is an election year and I think it's the responsibility of the political parties and the social organisations that they should work towards strengthening intuitions in a democracy.

We should go to the people and create awareness. There are Vivekanand yuva parishads in all towns and cities. In all meetings I've gathered 2-2.5lakh youth and talked to them about Vivekananda and his ideology. So calling it a political yatra without Vivekananda's ideology, is wrong.

'Gujarat is not fighting against Centre' 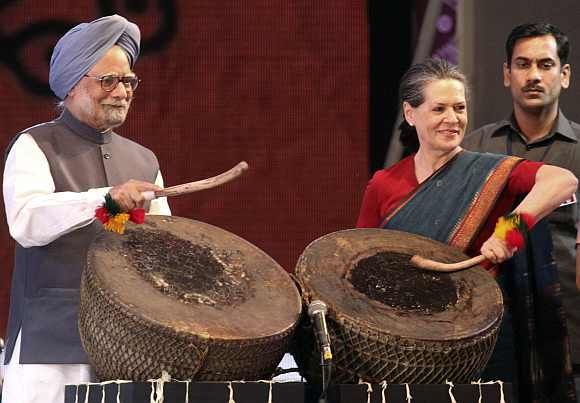 Even in the run up to the election, whenever I get time I keep all the matters in detail before the people. Where there is a limitation of time I touch upon certain points and move to the next stop. In the last meeting I felt it's important to talk about water issues, so I talked about it.

I've not targeted any individual. Whatever is being said about Gujarat, I want to keep the right facts before the people. Gujarat is not fighting against Centre. We have complaint that in the last eight years the central government has treated Gujarat like an enemy state. They have treated Gujarat in a way what is also not expected for an enemy nation. The central agencies are being used against Gujarat.

Gujarat is the growth engine of the country today. But the central government only for political reasons is not leaving any chance to ruin the state.

I've not raised the question about (Congress president) Sonia Gandhi's health even once. Rather I had requested the prime minister of the country that Sonia Gandhi is the wife of our former prime minister and the entire country should be concerned about her good health and treatment.

India is a liberal country, we have big hearts, whatever expenses may be there from the government exchequer we should not bother about that and spend for her health. This should be kept out of the purview of RTI. That is my view point.

'The govt, not Soniaji, should answer on the foreign trips' 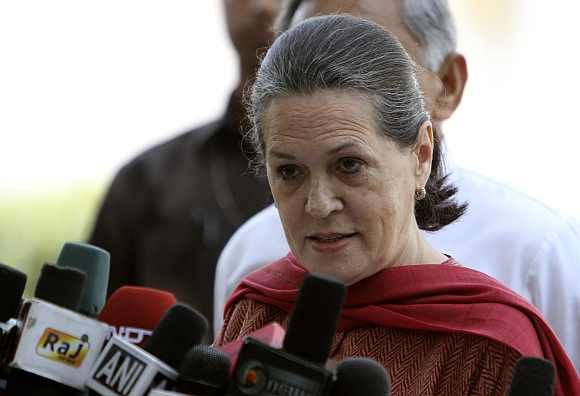 That's a wrong accusation. You should watch the media recordings. In July many newspapers and magazines had given the figure through PTI that expenses on Sonia Gandhi's foreign trips in last three years had amounted to Rs 1880 crore.

Then I raised question...its three months since July, why the government is not giving any clarification? Soniaji is not answerable for this. The government of India should clear whether this money has gone from the state treasury or not, to avoid a bad name for Sonia Gandhi.

Then I said that those figures were taken from the newspapers, and if those appeared to be wrong, I would accept my fault. But the PMO has only answered about her health trips for treatment but there is no answer on her foreign trips.

I've never asked any question, I just talked about the figures published in newspapers. The RTI activists are raising question, not me.

One more revelation by Hisar RTI activist Ramesh Sharma has also come in our regional newspapers. He collected data from various foreign embassies. There was information from eight foreign high commissions about expenditure incurred on Sonia Gandhi's foreign trips. If the PMO is giving the figure of Rs 3 lakh and foreign embassies give the figure of 18 lakh, 14 lakh, then the PMO is concealing the information under RTI.

You claim all the credit for bringing RTI. But what is the reality of RTI; it was my duty to inform the public. The prime minister's office itself is not respecting RTI. The entire issue was maligning Sonia's image and that's why I asked the PMO to come out with the exact figures.

I'm seeking people's vote only on the issue of development. I'm proud of it. I've the courage to ask the people whether they are happy about all these 11 years. But if anybody raises a voice against Gujarat I will answer that with all force. I'm ready to fight to any extent for the honour of Gujarat.

If the Congress claims the credit for RTI and glorifies it, but the people are not getting the benefit of the RTI, it's my responsibility to raise the voice in favour of the RTI activist. I consider it as my duty in a democracy.

On Modi vs Sonia

Many people are converting the issues like this since last 11 years, you can also do it. But I've cleared my position.

'There should be a malnutrition survey carried out' 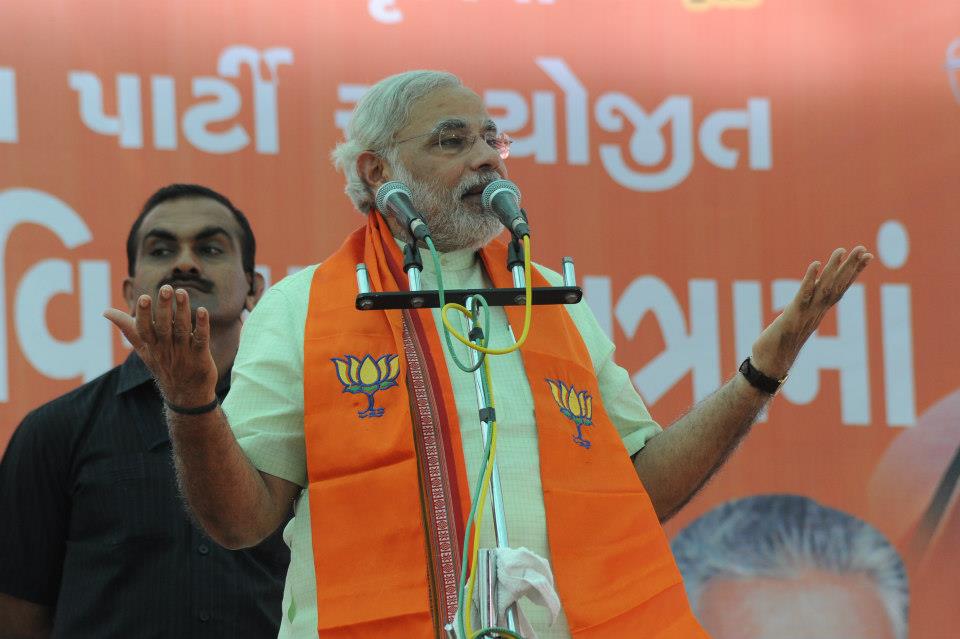 On drought and water scarcity in Saurashtra region

Two years ago your channel had done a half-an-hour show on the good work done by the Gujarat government on water issues. There was a time, where 4,000 villages were depending on water tankers by the beginning of January or February.

Today we have supplied Narmada water through pipelines. This year, even after rain deficit over two months, we had to supply water though tankers to few villages only. Even in Kutch there is water. Earlier Border Security Force had kept 900 camels only to ferry drinking water for the BSF jawans in Rann. Now we are supplying Narmada water to them. Let Soniaji speak whatever she wants because of political reasons. But Gujarat has done a lot on water issues.

Second thing, I'm not yet happy about the development work in these 11 years. People might be happy. I say that I was filling the pits dug by the Congress in all these years. The process to build the Gujarat of my dream will begin now.

It should be brought out what are the region specific problems regarding malnutrition. Even at times water causes nutrition problems. There are many reasons and that's why we have to work together.

But first of all there should be a survey carried out. Gujarat is the first state in the country to start a specific programme called 'nutrition mission'. Around Rs 1000 crore we have allocated in budget for this programme. We are working towards it.

On M B Shah Commission

'Modi critics are being rewarded with RS seats, Padma awards' 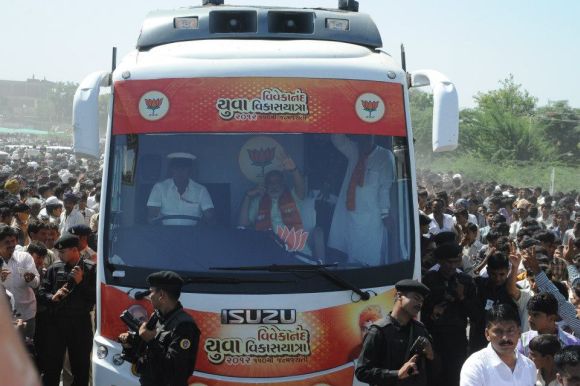 Image: Modi waves to his supporters from his campaign bus during his ongoing yatra
Photographs: Courtesy: Gujarat BJP

Media houses are surviving on this. The Modi critics are being rewarded with Rajya Sabha seats and Padma awards. I wish you all the best to keep this alive and get into Rajya Sabha or get Padma awards."

On going to Bihar

On huge support among youth and women

There is no secret.....you serve with all honesty and dedication for the people, if they see your honest commitment, they even pardon your small mistakes. They should have confidence that you are working for their development.

This is true. I'm an RSS worker. Since my early RSS years I used to get up at 'brahm muhurt that is just 10-15 before 3am. But after coming into politics it has become 5am now.

'BJP will register a spectacular win in Gujarat' 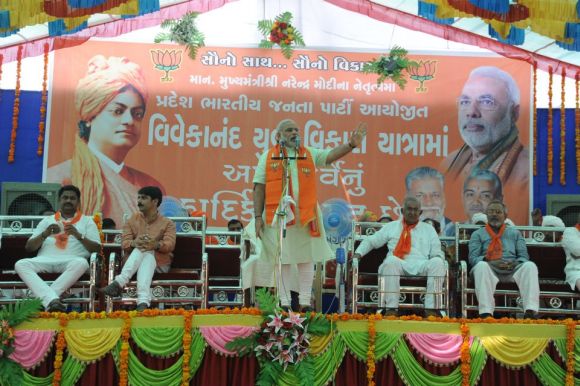 Have the people of this country given the mandate to the media in Delhi to find out the prime minister in 2014? I've been repeating that the six crore Gujaratis have given me the responsibility of Gujarat. I'm serving to the people of Gujarat. I'm investing all my time and energy to take Gujarat to new heights. I will keep on doing this.

In 2012 election BJP will register a spectacular win in Gujarat. My dream is to build 'Divya and Bhavya Gujarat' and after this election I will concentrate all my efforts on that.

On the image of being an autocrat

On larger than the life image

People of Gujarat today know Narendra Modi because of the friends in media and my rivals who have been cursing me all these years. There was curiosity among people to know the truth. When they came to know the reality, they started liking me.

On promoting the larger than life image

On sidelining the veteran leaders

No such criticism has come to my notice. But if I'm committing all the mistakes and if anybody brings to my notice that I've deliberately committed any mistake, then I will rectify that.

On apologising for 2002 to become PM