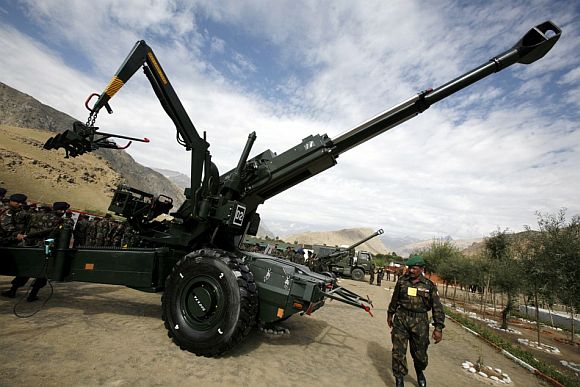 Last month we had published an interview with Sten Lindstrom, the 'Deep Throat' behind the revelations in the Bofors scam of the 1980s, done by Chitra Subramaniam. In his counterpoint, Congress MP Mani Shankar Aiyar, who as joint secretary in Rajiv Gandhi's PMO had a ringside view of the whole affair, writes that it wasn't a scam at all but a sting mounted by the mysterious 'N' of the Ardbo diaries

Since the Bharatiya Janata Party established their democratic credentials by howling me down two sentences into my response to Arun Jaitley on the floor of the House, perhaps you might let me exercise my right of reply to Chitra Subramanian, who is once again raking up the 'smoking guns' of the Bofors affair.

Chitra concedes that the Bofors guns purchased by the Rajiv Gandhi government were excellent guns, with the "shoot and scoot" capacity that no other competitor had to combat the heat-seeking radar furnished just then by the Americans to Pakistan.

The Bofors guns irrefutably proved their worth at Kargil. They were also purchased, as Chitra concedes, at a "competitive price", indeed a damned good price.

Why on earth would anyone seek a bribe or pay one for a gun that was the best on offer, sold at the best available price, with several guns thrown in for free at the end of hard commercial negotiations, and with not only a built-in agreement for the indigenous manufacture of the artillery but also with the guarantee of an assured supply of the required shells and ammunition?

Why would a guilty party demand that the evidence against him be made public? 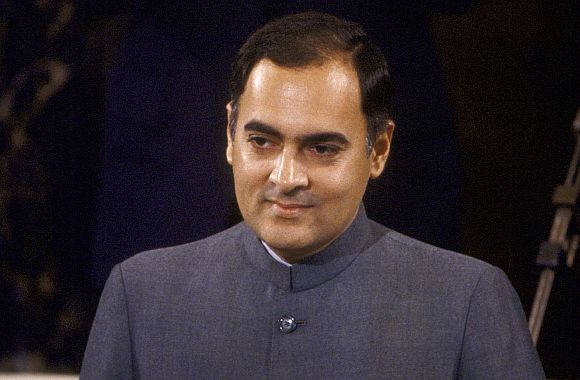 And if the prime minister wanted to get a slice of the pickings for himself or his family friends, why make a song and dance about entering into a solemn agreement with Sweden's prime minister, the highly respected Olof Palme, that no middlemen would be entertained and no commissions (read bribes) paid -- practice which is par for the course in defence deals the world over?

When Rajiv Gandhi was soundly beaten in the elections of November 1989, why would he demand in the Lok Sabha that the incoming prime minister place on the table of the House every single paper dealing with Bofors so that the country could see whether the new Leader of the Opposition was a crook or not? Why would a guilty party demand that the evidence against him be made public? Only because he was not guilty.

VP Singh reneged on his promise to place all the Bofors papers on the table and submitted only the choice few he deemed fit to prove his outrageous claim, made during the elections, that the piece of paper he pulled out of his pocket contained the details of the relevant bank accounts and the guilty would be brought to book within weeks of his winning the election. 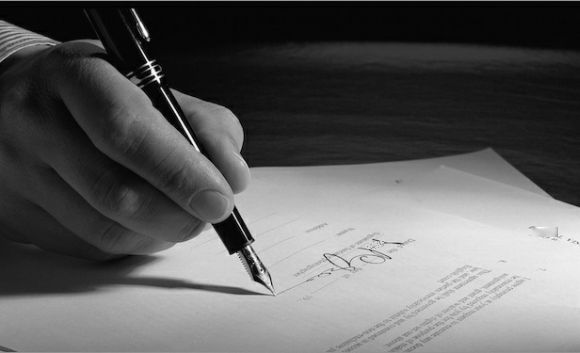 A critical noting in the files tabled showed that on the very day the Swedish National Accounting Bureau confirmed that illegal payments had indeed been made (my memory is the date was June 4, 1987), the prime minister was raising on file all the relevant questions: whether a military assessment had been made about the security implications of indefinitely postponing procurement of a gun the army had hitherto held critical to the defence of the nation; whether an alternative gun of the same quality, with "shoot and scoot" capability, could be procured within a reasonable period of time and, if so, at what estimated extra cost; whether cancelling the Bofors contract would stand the scrutiny of the International Court of Arbitration; what effect such cancellation would have on other commercial contracts; and so on and so forth.

But, alas, without the prime minister knowing, his additional secretary, the very powerful bureaucrat, Gopi Arora, decided to suppress the file. Not till Arun Singh, the minister of state for defence, resigned at the end of the following month did the prime minister's pertinent questions reach the ministry.

This is evident from the notings that show that although Rajiv penned his questions in his own hand and signed the file in early June, it was received in the defence ministry only at the end of July.

Many years later, I asked Gopi, who was a friend and colleague of mine at the PMO, why he did this. His reply was that he was hoping to heal the rift between the two erstwhile friends, Rajiv and Arun Singh, which he thought would be irretrievably damaged if the file went forward.

The moot point is that not one shred of evidence indicating any wrongdoing was revealed in the papers made public by prime minister VP Singh. Deservedly, he fell within a year, but not before his additional solicitor general, one Arun Jaitley, chasing the Bofors chimera between Delhi, Stockholm and Geneva, had disgraced the fair name of our nation with his shameful letters rogatory, as testified to by Lindstrom, who is so quoted as saying in Chitra's column.

Honour was important to Rajiv, perhaps because he was not in the BJP 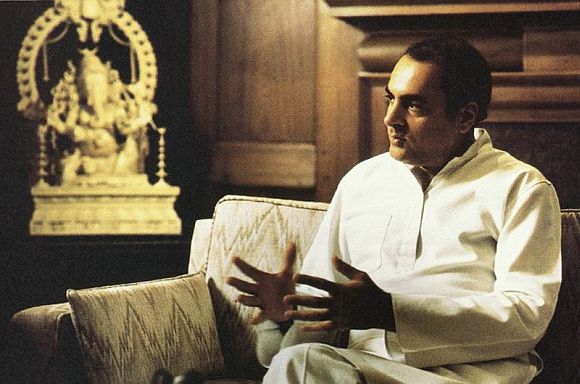 There remains the question of why Rajiv refused to entertain the Bofors delegation that arrived in India in early July 1987, reportedly to "reveal all". Lindstrom makes much of this in his Deep Throat interview in The Hindu although Chitra has wisely chosen not to resurrect it in her Outlook column.

Accepting that conditionality would have made Rajiv an accessory after the fact; reneging on it would have shown up the government as one that did not keep its word.

Honour was important to Rajiv Gandhi, perhaps because he was not in the BJP.

All subsequent efforts over the next 15 years by the same set of BJP politicians and their cohorts resulted in a judicial zero, but not until the exchequer had been mulcted of several hundred crore rupees chasing an alleged Rs 64-crore scam.

For Bofors was never a scam but a sting operation, mounted by an unscrupulous band of politicians and businessmen who decided to exploit the unprincipled Martin Ardbo's desperate desire to pay someone something, for that was his way of doing business. 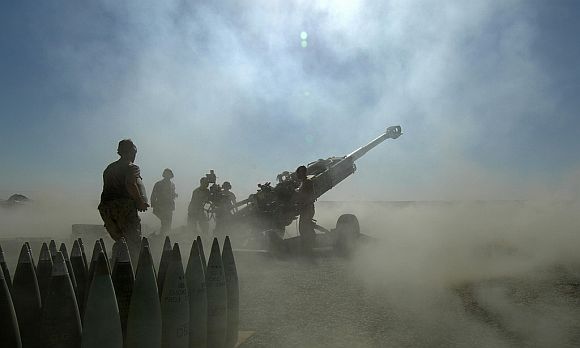 The sting was mounted by a gentleman identified as 'N' in the Ardbo diaries. What none in the media cared to do was identify who 'N' was. They had a ball identifying 'Q', 'R', 'H' and the rest of the alphabet soup. But why not 'N'? Was it because 'N' was one of them?

The key to that conundrum lies in the question Chitra raises at the start of her column and repeatedly returns to: who were AE Services and why did Bofors agree to pay them $7.5 million? And the answer lies in a news report published on October 13, 1989, in both The Indian Express and The Hindu.

The news report, delivered as the ultimate knockout blow, contained a quote from the report filed by the financial director of Bofors to his superiors about his interrogation by the Swedish Investigative Agency. The financial director wrote -- or so The Hindu and The Indian Express of October 13, 1989, inform us -- that "on AE Services, I was not pressed"!

Why not? If AE Services is the key to the conundrum, as Chitra correctly insists, why did the Swedish Investigative Agency not chase the lead to the ground? Indeed, what did Lindstrom, as chief of police, do about AE Services?

Nothing -- precisely because AE Services was an industrial espionage unit, previously used by Bofors on more than one occasion, and as Rajiv determined and publicly stated in mid-1987 itself.

Why did Lindstrom do nothing about AE Services? 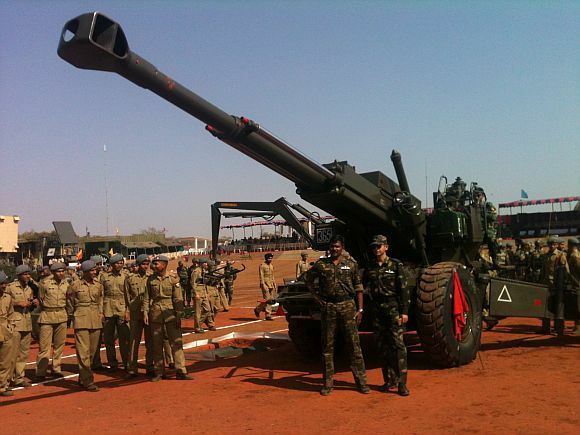 Lindstrom needs to be asked two questions: a) Why did he do nothing about AE? b) Why on earth did he not turn the screws on Ardbo? After all, every act of bribery requires a giver and a taker.

Since a Swedish citizen and a Swedish entity were the bribe-givers, why were they not chased to discover who and what was behind the $7.5 million payoff -- or was the payment actually for services rendered in the disgusting but legal realm of industrial espionage?

Let me give a lead. The contract with AE Services specified that payment would be made in instalments matching those paid by the Indian government, but only if the deal was through by March 31, 1986. Anyone in the inner coterie of governance, and at least one minister whose name began with 'N' was such a member, would have known of the high-level confidential decision to conclude the deal by the last day of the financial year in order to make provision in the budget for the next year of the largest single defence deal ever entered into till then.

Moreover, only one instalment was ever paid into the impugned AE Services account -- in August 1986. In the following month, September 1986, a relative of the Gandhi family, well-known to 'Q', and whose surname begins with 'N', was chucked out of the Rajiv government and promptly joined VP Singh's smear campaign against the prime minister.

Not a single payment was made into the AE Services bank account once this gentleman lost political office. Coincidence? Happenstance? Or enemy action -- as Goldfinger puts it to James Bond? Why did none of the Bofors-chasers, notwithstanding their having been in office for nearly a year in 1989-90 and then six years from 1998 to 2004, even once care to ask themselves who was this mysterious 'N' and why was he mixed up in the Ardbo diaries?

There is an old Hindi saying that Chitra might wish to translate into Swedish for her police informer friend: Chor machaye shor!