Analysis: Why Narendra Modi is on the defensive 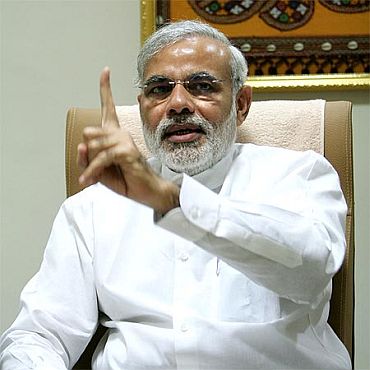 Modi has a real challenge if the allegations of corruption pick up momentum. Modi was struggling to improve his image with the minorities but now he will have to convince the majority that his deals were clean and he is above board, says Sheela Bhatt.

Two days back, L K Advani led the protest in the parliament complex against the appointment of former judge R A Mehta as the Gujarat lokayukta by Governor Kamla Beniwal.

Gujarat Chief Minister Narendra Modi has deployed the Bharatiya Janata Party's top leadership in New Delhi to argue his case in the political arena but he is doing few things in Gandhinagar that exposes his vulnerability.

He has written a letter to Prime Minister Manmohan Singh requesting him to recall the Governor. In a sensational act, Modi in his letter has made many serious charges against Judge Mehta. If any court approves Mehta's appointment then Modi will have egg on his face.

The BJP's contention is that for the first time, a Governor has acted arbitrarily while appointing the lokayukta without consulting the government. The BJP is calling it a murder of democracy. But now the Congress party is claiming that on August 18, Modi was all set to 'murder' democracy by bringing an ordinance that would have hurt the ethos behind the office of the lokayukta.

As per the Congress allegations, Modi wanted Governor Beniwal to sign the ordinance that would have changed the composition of the panel that appoints the lokyaukta in the state. According to Arjun Modhawadia, president of the state Congress, "Modi wanted to bring 'sarkari panel' to appoint the lokayukta. The double standard of the BJP is shocking."

Modi wants to do what the UPA is accused of 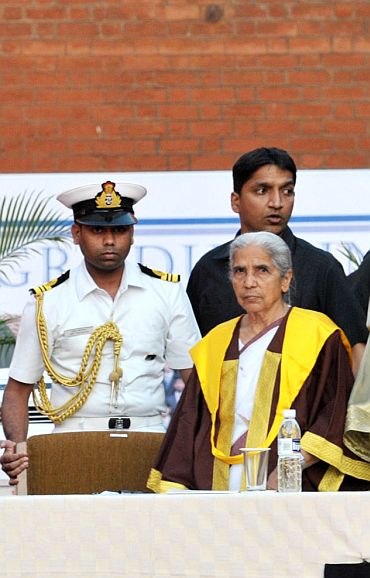 State Law Minister Dilip Sanghani was not available for comment. In the Rajya Sabha BJP leader Arun Jaitely gave a spirited speech against the Manmohan Singh government's attempt to bring a weak Lokpal bill in which the government will have a majority say in the panel that would appoint the Lokpal.

The United Progressive Alliance government is facing the people's ire for trying to control the appointment of the Lokpal under the proposed act, but now, allegedly, Modi wants to do exactly same thing.

Modi claims that Governor Beniwal should have acted on the advice of the government before appointing the lokayukta. Shaktisinh Gohil, leader of the Opposition in Gujarat, says, "We have no doubt that the Governor is right in her action. The last three appointments of the lokayukta were done without the advice of the government. Why is Modi questioning it this time?"

"Modi, wants to do exactly the opposite of what Jaitley recommends Dr Singh to do in New Delhi," says the Congress leader.

Modhawadia says, "Modi is against Judge Mehta, who is an independent judge. He wants to appoint a judge who can be influenced by him."

Here, the significant issue is regarding following procedures set for the appointment of the lokayukta where Modi may have a valid point that can be sorted out by the courts. But why is Modi protesting so much against the violations of procedures only?

"The people of Gujarat are waiting for the lokayukta to be appointed by the constitutional functionary in accordance with the law," says lawyer Anand Yagnik. He says, "People don't want any further delay on account of the political war between Modi and the Governor."

Currently in Gujarat, the Congress party has become active and aggressive while Modi is on the defensive. His supporters are unable to answer why Modi is overreacting for violations of procedures?

Modi in the dock over allotment of land to industry 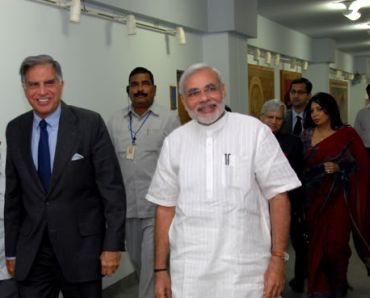 What else is discomforting Modi?

Many of his critics say that thanks to the Right to Information Act, Modi and his government are facing many uncomfortable questions for allotting land to industry in Gujarat. One glance at local newspapers gives an idea that 'corruption cases' of the Modi government are in news, which was not the case since the last nine years.

At such a sensitive time, with assembly elections are just a year away, when the Supreme Court-appointed Special Investigation Team report on the involvement, if any, of Modi and his government in the communal riots of 2002 is with the court, when anti-incumbency has started setting in certain areas of the state and when Modi is doing everything to improve his image amongst the Muslims, he is determined to ensure that his political position remains strong to combat freshly-emerging charges of favours done to his favourite industrial houses.

His government's only defence against these charges so far is that the Modi government largesse is much less compared to what late Chimanbhai Patel-led government gave. Patel had formed government with the support of the Congress and later he joined the party.

Modi's critics say the Congress had also showered favours to attract investments. Then, the 'state favours' given to attract industrialists in late 1980s and early 1990s had crossed all limits. That time the allegation was that sum of Rs 50,000 crore was given as hidden favours in form of tax holidays to a handful of industrialists. The charges were discussed in the assembly too.

Now the Congress leaders are claiming that, "In the BJP rule, Gautam Adani, Sudhir Mehta of Torrent and Ratan Tata have benefited the most."

It's not that only the Congress leaders that are criticising Modi these days. Bhola Bhai Patel, president of the Gujarat Sahitya Parishad, also blasted Modi recently.

In an interview to a Surat-based daily, he said, "The rulers have become kings." Patel, a highly respected writer, says that in Modi's rule corruption is rampant (Anhi ketlu badhu khavay che). He has accused Modi of behaving like the dictator Napoleon. Patel has accused Modi of suffering from narcissism.

Pressure is building up on Modi 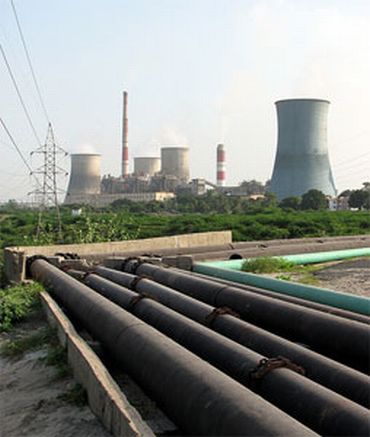 The irony is that the Modi government wants to blunt the attack on him, for favouring Adani and Tata, by taking shelter behind Chimanbhai Patel's policy, against whose corruption people had launched the Navnirman Andolan.

Pressure is slowly building up on the Modi government to give a convincing reply to the charges of making policy that favoured industrialists outright.

Gujarat Congress leaders have submitted a memorandum to President Pratibha Patil on issue of 'corruption by the government of Gujarat and more particularly, chief minister of Gujarat' amounting to staggering Rs 1 lakh crore.

Modhwadia and Gohil have alleged that Modi and his government are indulging in rampant corruption that includes favouring industrialists by allotting them government properties at a huge loss to the exchequer, giving favourable business deals to industrialists and giving valuable land at cheap rates to builders and industrialists.

Modi has been accused of misuse of power and corruption running into hundreds of crores of rupees. The details were procured using the Right to Information Act.

Jainarayan Vyas, spokesman and a senior minister in the Modi cabinet, refused to comment on the issue saying that, "he doesn't have a brief on it."

Jagdish Thakkar, Modi's public relations officer, also said he is unaware of the subject and he speaks only when he is given a brief.

'Modi should be prosecuted' 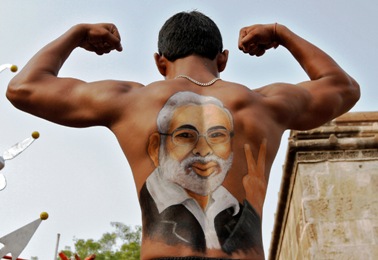 Modhwadia thinks Modi is, "liable for criminal acts and deserves to be prosecuted. The state machinery will not be able to investigate Modi and his offices. It should be investigated by Central Bureau of Investigation."

Modhwadia regrets that Gujarat, like Karnataka, didn't have a lokayukta for seven years.

He says, "Even the lokayukta will not be able to function independently because the position of the lokayukta in Gujarat is by nature of an advisory body which has no power except that of an inquiry commission."

Modhwadia alleges that some bureaucrats are, "acting as the personal employees of the state ministry."

The list of allegations against Modi submitted to President Patil runs into many pages. Some of the highlights deserve the Modi government's official response.

In the charge-sheet against Modi, the most prominent allegations are about cheap land allotment, a nationwide epidemic for various governments.

To avoid giving any official response to the people and to the newly-appointed lokayukta, Modi voluntarily announced a commission to inquire into the charges against him. It will be headed by Judge M B Shah. The only problem with the commission is that it has no powers as the state lokayukta has.

It's a political move by Mr Clean to save himself from being tainted. But it's a defensive move by the leader who is perceived as the strongest leader of the BJP.

Charges of corruption can hit Modi where it hurts 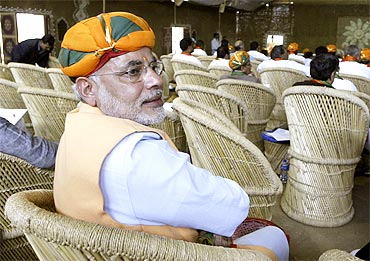 The political strategies available to Modi to combat serious charges of corruption may not be many. It's more or less accepted that Modi is unlikely to resort to Hindutva again to counter his political adversaries. In the last two years, Modi has sent many positive signals to the minorities in Gujarat. In fact, Hindu groups are complaining that Modi is protecting cow-slaughters -- a highly sensitive issue in the state.

Modi is ambitiously going ahead to get minority support and his charisma has not waned, yet. The secular lobby could not dent his image in spite of providing robust legal challenges.

But the charges of corruption can truly hit him where it hurts. The Gujarati people inspired even Jaiprakash Narayan to launch the movement for Sampoorna Kranti in Bihar. Gujaratis have a history of reacting violently to corruption in governance. Ask the Congressmen in Gandhinagar. The taint of corruption has been so deep on them that they have been kept out of power since 1995.

Modi has a real challenge if the allegations of corruption pick up momentum. Modi was struggling to improve his image with the minorities but now he will have to convince the majority that his deals were clean and he is above board.