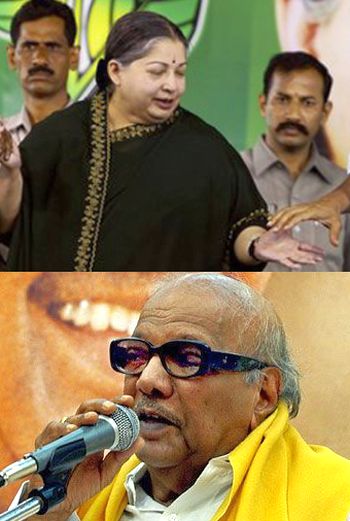 Shobha Warrier analyses why Srirangam, with its large chunk of Vaishnavite Brahmin population, makes a perfect seat for All India Anna Dravida Munnetra Kazhagam chief J Jayalalitha to contest from.

It is back to the roots for both M Karunanidhi and Jayalalitha in the Tamil Nadu assembly election scheduled for April 13.

It didn't come as a surprise to many when 87-year-old Dravida Munnetra Kazhagam patriarch decided to contest from the place of his birth, Tiruvarur. With the DMK's image dented badly, it was expected that the party would choose a safer place for its party chief and not Chennai.

Meanwhile, it was Jayalalitha who sprung the surprise with her decision to contest from the temple town of Srirangam even though she had dropped a few hints earlier.

Nobody sees any political reasons behind her decision, as there are many safe seats for her party, the All India Anna Dravida Munnetra Kazhagam, in Tamil Nadu. There could only be for sentimental reasons -- she is a native of Srirangam.

Srirangam, a part of Tiruchirapalli or Trichy, is an island with river Kaveri on one side and a Kaveri tributary on the other. A large chunk of the island's population is Vaishnavite Brahmin (followers of Lord Vishnu). No wonder then that Jayalalitha -- a devout Hindu and an Iyengar -- chose a place dominated by Iyengars to contest the assembly elections.

Srirangam is a tourist attraction for the Sri Ranganathaswamy Temple (dedicated to Lord Ranganatha, which is the reclining pose of Lord Vishnu). It was reported that Jayalalitha visited the temple last August and spent over three hours there. 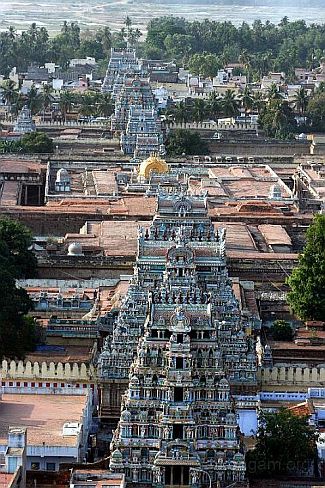 Image: An aerial view of Srirangam

Recently, in front of a massive crowd the party had organised against the DMK in Trichy, she said that Srirangam was her native place and that she was very attached to the place sentimentally.

Now that Jayalalitha is going to contest from Srirangam, suddenly, the temple town is getting a lot of attention.

If you look at the history of the constituency, it was formed in 1952 and the candidate who won was Chitrabalam from the Communist Party of India. After that, from 1957-1967, it returned the Indian National Congress nominees.

But from 1971-2006, from the time M G Ramachandran launched the AIADMK, you find that except in 1989 and 1996, the temple town had sent only AIADMK candidates to the assembly.

The sitting MLA is M Paranjothi of AIADMK and he won 45.98 per cent votes. The highest percentage the party scored was in 1991 when there was a wave against the DMK after the assassination of Rajiv Gandhi in Sriperumbudur and it was 70.51 per cent votes.

A very safe seat for the AIADMK party supremo.