13/7 destroyed what poverty couldn't. Their dreams 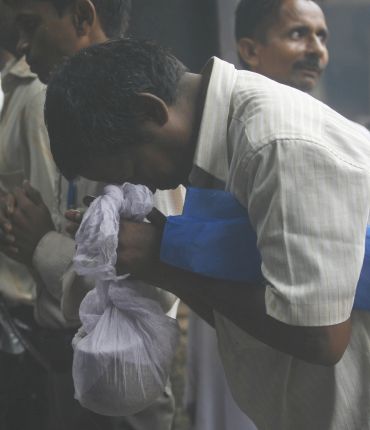 Image: A relative of a Mumbai blasts victim prays at the crematorium
Photographs: Reuters A Ganesh Nadar in Mumbai

A Ganesh Nadar meets victims of the 13/7 triple blasts in a Mumbai hospital and tries to gauge the immeasurable damage that has been caused to their lives.

Harkisandas hospital near Opera House in South Mumbai is a very old hospital. It is housed in a heritage building.

On July 13, 2011, there was a bomb blast in the diamond market near the Opera House. Two other blasts rocked Zaveri bazaar and Dadar in South and Central Mumbai respectively, in which a total of 27 people lost their lives, and over 130 others were injured.

Most of the victims of the blast at Opera House were brought to the Harkisandas hospital. All the injured were attended to promptly and the majority of them left after receiving first aid.

However, four victims were brought dead to the hospital and 34 others, who were seriously injured, were admitted here.

Two and a half months later, six victims of that horrendous blast are still here.

"We are taking good care of them, everything is free for the patients as long as they are here," says Ravi Anchan, general manager, front office.

'When I get well, I'll resume my job' 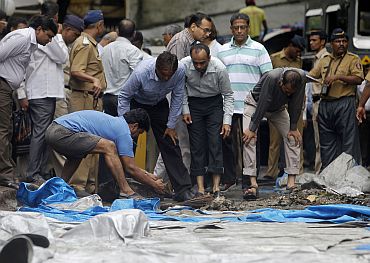 Satish Singh, 36, is a security guard at the Pancharatna building which houses the diamond market near the Opera House. Hailing from Nimathi village in Darbhanga district of Bihar, Singh studied up to the 12th standard. He has been working here for the past seven years.

Singh was on his way home when the bomb exploded on the crowded street that day. He received major injuries in his leg and ears.

Now he lies on a bed on the first floor of the hospital. His left leg is okay but the right leg has been severely damaged, which has been held together by metallic stilts. Needless to say, he cannot move that leg.

He does not know how long it will take to heal. "Here they are taking very good care of me. If I had been in my village back home, I don't know what would have happened to me in a similar situation".

He has received the promised Rs 2 lakh cumulative compensation from the state and central government. His father, who was with him, was seen grumbling,

"He gets free food from the hospital which is good, but what about us? We are two people who have come from the village, we have to spend so much money to eat in this city," he says.

Singh looked sad and tired but he has no plans to go back to his village. "When I get well, I'll resume my job. I need to keep that job; I have a five-year-old son and a three-year old daughter".

'My wife said she doesn't want to live with me' 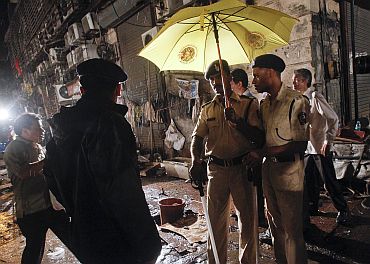 Image: Policemen stand guard at the site of an explosion near the Opera House in Mumbai
Photographs: Vivek Prakash/Reuters

Pintukumar Yadav is only 20-years-old. He is from Hazaribagh in Jharkhand, and came to Mumbai two years back.

"I used to sell sandwiches near the place where the bomb exploded".

He could hardly speak, as he was in so much pain. He was very thin, emaciated; his ribs were visible on his chest. He lost one leg in the blast and his other leg was broken. The broken leg has been put back together and is now plastered. But he does not look like he has the strength to recover.

Imagine the dreams this teenager had when he came to the maximum city. Two years later they lie shattered like his bones, in a city where he has no one to call his own. "I have no one, the cops brought me here. I do not know how long I will be here," he said softly.

The government has given him the promised Rs 2 lakhs and they are done with him. He has put that money in the bank.

Yadav married Taari Devi 18 months ago and they have a six-month-old son Sunil. "She knows I am injured. She has not come to meet me," he looked baffled and confused. His wife and child were in his village after marriage.

"Once I get well I will go back to my village, my mother is crying for me, my dad is here with me" he said.

News from his village has added to his woes. His wife has left him with their son. "She said she is not interested in staying married to me," he said.

A totally broken young boy stares at the walls of the hospital wondering what he must have done to deserve this.

'I lost both my legs' 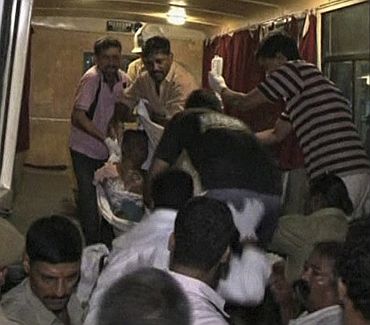 Image: A victim is rushed to an ambulance after explosions in Mumbai in this still image taken from video
Photographs: ANI/Reuters

Ghulup Narayan Namdeo belongs to Raigadh district in Maharashtra. He has studied up to the 6th standard. He says he is 35-years-old but looks much younger.

Namdeo has been in Mumbai for the past 12 years. He lives in Khar (east) in the suburbs of the city.

"I was a peon in the diamond market for many years. Now I work as a broker," he says. On a normal day he gets around Rs 100, which means that he actually works under a broker.

"I was just standing on the road when the bomb exploded. I don't know what happened. I lost both my legs there. I did not even know that at that time. The cops brought me here."

Like the others, he too has received Rs 2 lakh from the government.

His wife Nikita was with him in hospital. She is an uneducated lady and looked totally lost in the situation that they were in.

They have three sons, 11, 8, and a 5 years old. While the eldest is in their village, the others are studying in Mumbai.

Ghulup has a younger brother working in Mumbai. "I have to do something after I get out of hospital. I have a wife and three kids to look after," he says. But he has no idea what he is going to do.

'I have not decided yet what I will do' 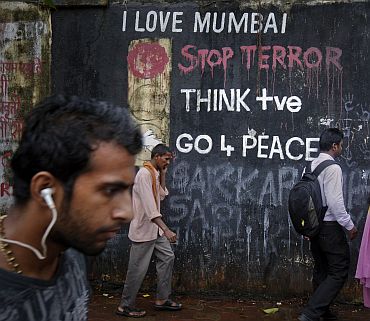 Image: Pedestrians walk past graffiti that outside a Hindu crematorium in Mumbai
Photographs: Danish Siddique/Reuters

Bhuwad Sahadev Mahadev, 56, has spent 41 years in Mumbai. He belongs to Khanghar in Raigadh district. He used to work in a diamond merchant's office in Mumbai. Now he is a small broker.

On that fateful day Mahadev had attended a satsang from 3 to 4 pm. He had come back and was just standing on the road when the blast took place. He lost one leg and severely injured his back.

He has a son and two daughters. They are all married. He stays with his son. His son also works in the diamond market.

But Mahadev has not lost all hope. "If I am able to walk with the 'Jaipur' foot, then I will go back to work in the diamond market. I have not decided yet what I will do. But I will definitely do something. I have to look after my family," he says.

He said he had received Rs 2 lakh compensation, when the hospital attendants wheeled him away for further treatment.

Mumbai is the city of hope for millions who live in rural India. Poverty brings them here. Grim poverty here makes them work extremely hard. The bomb blast has killed what poverty could not. It has killed their 'hope' and that is the biggest tragedy.