News
Business
Movies
Sports
Cricket
Get Ahead
Money Tips
Shopping
Sign in  |  Create a Rediffmail account
Rediff.com  » News » 'Zardari had prior knowledge of US raid on Osama compound'

'Zardari had prior knowledge of US raid on Osama compound'

Ijaz further claimed that Zardari had telephoned army chief Gen Ashfaq Parvez Kayani on the day of the US raid and asked him not to use F-16 combat jets to target the helicopters carrying the American troops.

He made the remarks during an interaction with the media before entering the Pakistan High Commission in London to depose via a video link before a Supreme Court-appointed judicial commission that is investigating the memo issue.

He contended that his claims were similar to those made in a report in 'The News' daily.

"I can confirm that the two people that are referred to in the document are...    the (army chief) Gen Ashfaq Parvez Kayani, who received a call from President Asif Ali Zardari, essentially asking him to stand the F-16s down that had been scrambled to take care of the US helicopters in Pakistani airspace," Ijaz told the reporters.

"As far as I know, it was Gen Kayani and president Zardari that had that conversation. It's pretty clear."

Ijaz claimed that Pakistan's former envoy to the US, Husain Haqqani, could end the memo issue by speaking up on the matter.

Haqqani was forced to resign after Ijaz claimed last year that he drafted and delivered the memo to US authorities on the envoy's instructions. The memo had sought US help to stave off a feared coup in Pakistan after the killing of bin Laden.

Haqqani and the government here have dismissed the claims by Ijaz, who has so far not made public any credible evidence to back up his allegations.

Ijaz contended that Haqqani "could end this whole fiasco in one minute by simply standing up and telling the truth about what it was that he did. He knows what he did, I know what he did."

The report in The News daily, which quoted an email that its reporter received from an anonymous sender, said Pakistani air traffic controllers had detected the entry of four US helicopters into Pakistani airspace between 12.39 am and 12.47 am on May 2 last year.

One of the helicopters was reportedly a remote-controlled aircraft.

The American pilots initially told the air traffic controllers that they were headed to Chaklala airbase in Rawalpindi but later diverted their course towards Abbottabad.

On being asked the reason for this, they said this was due to "dense clouds" in their path. The helicopters then began hovering over Abbottabad and an American pilot said this was because of a technical problem.

The army's General Headquarters and Special Service Group too were alerted, the report said. Personnel from Pakistan's Special Operations Task Force were barred by American personnel from entering the compound in Abbottabad and a senior Pakistani military officer was told by someone in the Pentagon that permission had been granted for the operation, the report said.

Though four F-16s were scrambled from the PAF bases at Peshawar and Sargodha to intercept the US helicopters, the report said "one senior person contacts the office of another senior person to say that he has permitted the operation, thus no intervention should be made."

Ijaz referred to this media report and claimed the two senior persons were Kayani and Zardari. 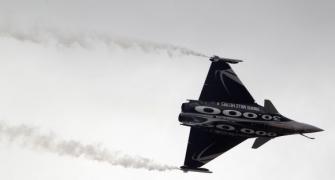 Had information about coup from four countries: Ijaz

Ijaz submits his BlackBerry and 'other evidences'