Pakistan is expected to reopen the North Atlantic Treaty Organisation supply line anytime now, as the United States has agreed to tender an apology in 'soft words' over the Salala checkpost incident, reports Tahir Ali

Prime Minister Yousuf Raza Gilani and Foreign Minister Hina Rabbani Khar too were present at the meeting held at the presidency.

According to sources, Khar briefed them about her visit to Kabul and the participants were told that US high officials would tender an apology in 'soft words'. The NATO would reconstruct the destroyed patches in Karachi-Torkham (Khyber Agency) highway and so, the supply is expected to be restored within 72 hours (by Monday), sources said, while adding that dialogue between NATO and the Pakistan army has also been completed.

Zardari has called a meeting of the coalition partners leaders in Islamabad to take them into confidence, sources said.

The strategic supply routes were closed after a US air strike killed 24 Pakistani soldiers in November 2011. In March, Pakistan's parliament agreed to reopen the supply lines on the condition that Washington apologises for the air strikes and end the drone attacks on its soil, which Islamabad termed as unlawful and a violation of the country's sovereignty.

But the US had refused to tender any apology, saying that it was Pakistani troops who had initiated the attacks. However, Islamabad did not accept the US explanation, and has been repeatedly demanding an apology and compensation for the wounded and the families of the dead.

The Obama administration nearly delivered an apology in January, but by then the Pakistani government wanted maximum political mileage out of it and requested a delay until a parliamentary committee finalised its recommendations.

Sources say that on February 22, US Secretary of State Hillary Clinton was headed to a meeting in London with the Pakistani foreign minister, apology in hand, but was told en route not to say sorry, because the White House had just apologised to Afghan President Hamid Karzai over the US troops Quran-burning incident.

'Two apologies at once would make it look like everything was unravelling; the White House feared it might look weak,' reported the Wall Street Journal while quoting a senior US official.

In May's NATO conference in Chicago, the US expected an announcement from Pakistan that it was prepared to reopen the supply routes and Islamabad was hoping for an apology, but both the parties returned without any results.

With every passing moment, relations between the two countries went from bad to worse, with US Defence Secretary Leon Panetta warning that the US was 'reaching the limits of its patience' with Pakistan last week.

Later, the US also temporarily pulled out of talks with Pakistan over re-opening the supply routes. "The decision was reached to bring the team home for a short period of time," said Pentagon spokesman George Little. Islamabad maintained that the talks had not broken down, but were 'still on'.

An 'apology' is the only thing that could make the supply lines reopen and bring back Washington-Islamabad relations to normalcy; there is no other way out with the weak political government. If the supply line is restored without any apology from the US, the opposition parties would politicise this issue during the elections that are not far away.

There were also reports suggesting that Islamabad was demanding $5,000 for every NATO vehicle that passes on its routes, but the chief demand was still the apology.

During her visit to Kabul on Thursday, Khar rejected reports that Pakistan was haggling with the US over transportation fees for the supplies. "Pakistan still wants an unconditional apology and the reassurance that a Salala-type incident does not happen again."

The US was still showing stubbornness to apology over the Salala incident, but the situation turned favourable for Pakistan when Senator Dianne Feinstein (D-California), chairperson of the US Senate Intelligence Committee, called upon the US administration to extend an apology to Pakistan.

"The US administration would do well to apologise for its mistakes in the firing incident," she said, adding that this would also help in the reopening of the ground lines of communication.

She added, "The national security of the US will be better served with a positive relationship with Pakistan."

Feinstein's statement even made Panetta show some flexibility in his stance over US-Pakistan relations. Previously, he had not only said that the US has lost patience with Pakistan but also advised to provide conditional aid to Islamabad.

He said, "What I would do is look at conditions for what we expect them to do," Panetta said, without elaborating any further. He agreed to help write a letter to US Congress with his recommendations for how to proceed with aid for the Pakistani military and government.

"They're asking not only for that, but there are other elements to the negotiations that are also involved that need to be resolved," Panetta said.

When contacted, Dr Aisha Siddiqa, a Pakistani defence analyst, she said that an apology is not an "easy decision" for US President Barack Obama, since the election season is on in America, and this could prove "costly" for him

"Even if the US tenders an apology, it would not come from Obama or some other high official; it would most likely come from some low-level official," Aisha told rediff.com.
Tahir Ali in Islamabad
Related News: North Atlantic Treaty Organisation, Leon Panetta, Pakistan, Barack Obama, Hina Rabbani Khar
SHARE THIS STORY
Print this article
Obama should apologise over NATO attack: Bilawal Bhutto
Pak discusses toning down US apology over NATO strike 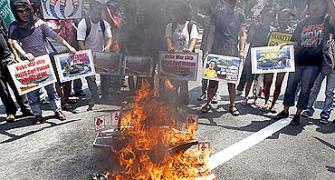 Pak insists on US apology for NATO strike