News
Business
Movies
Sports
Cricket
Get Ahead
Money Tips
Shopping
Sign in  |  Create a Rediffmail account
Rediff.com  » News » 'What rubbish': Rajnath on reports of being in UP CM race

'What rubbish': Rajnath on reports of being in UP CM race 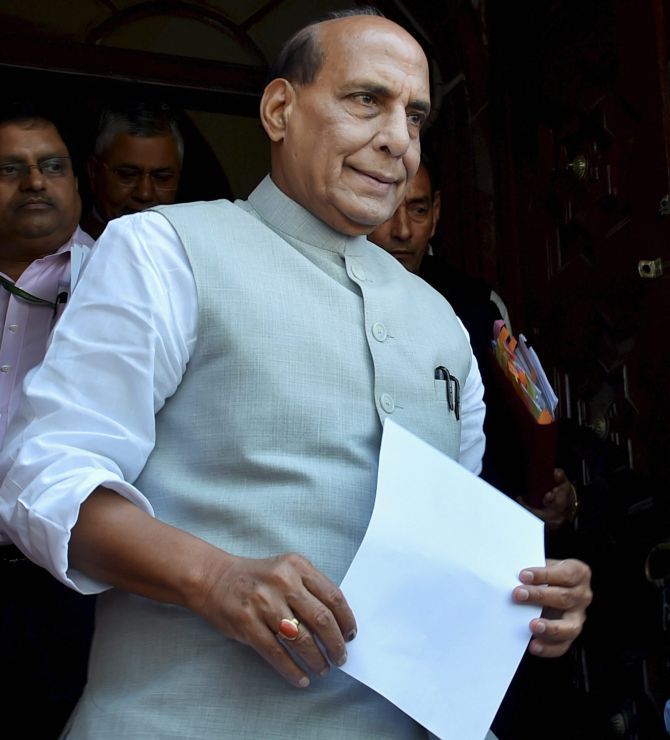 Suspense continued on Wednesday over who will be the new chief minister of Uttar Pradesh, four days after the Bharatiya Janata Party’s resounding triumph in the key Hindi heartland state, where the party won 325 seats with its allies.

While the BJP scrambled to form its governments in Goa and Manipur, where it was not even the single largest party, hurriedly cobbling together post-poll alliances, amid the charge of ‘stealing’ the mandate, the party leadership is taking its own sweet time to decide the chief minister of the country’s most populous and politically significant state.

Union Home Minister Rajnath Singh, the tallest party leader from Uttar Pradesh and a former chief minister to boot, is said to be among the frontrunners for the coveted job, but he was dismissive about the possibility.

“Kya faltu baat kar rahe hain (what rubbish are you talking),” he retorted when asked by reporters outside Parliament House whether he was a contender. He described the speculation about his return to state politics ‘unnecessary and futile’.

Singh has vast administrative experience, including as UP chief minister in 2000-02.

As speculation swirled about the possibility of a BJP legislature party meeting on Thursday, the party’s state unit chief Keshav Prasad Maurya said, “The picture will be clear in the next two to four days.”

When asked whether all 312 newly elected BJP MLAs will meet in Lucknow on Thursday as reported in the media, Maurya, a Lok Sabha MP and himself in the running for the top job, said, “No such meeting has been convened in the first place. So, there is no question of holding or putting it off.”

He said the meeting will take place whenever the party leadership decides.

However, at the daily media briefing of the Home Department, IG (Special Task Force) Ram Kumar, while responding to a question said Prime Minister Narendra Modi could visit Lucknow on March 17.

“Prime Minister Modi may visit Lucknow on March 17. Preparations are going on (in anticipation). IG (Lucknow Zone) is monitoring all the preparations,” he said.

He, however, maintained he had no knowledge of whether it was in connection with the swearing-in of the new government.

The names of a host of leaders, including some sitting MPs are doing the rounds in political circles.

Among them is that of Manoj Sinha, an upper caste Bhumihar from the ‘Poorvanchal’ belt where Prime Minister Narendra Modi’s constituency Varanasi is also located.

Sinha, MP from Ghazipur, is serving his third term in the Lok Sabha and was given independent charge of Communication Ministry by Modi last year after he impressed him with his performance as minister of state for Railways.

While Singh and Sinha are upper caste Thakur and Bhumihar respectively, Maurya has emerged as the OBC face of the party. His elevation as state BJP chief, many feel, helped rally non-Yadav backward castes around the party.

Top party sources in the national capital said that barring Modi and BJP chief Amit Shah, who have been holding consultations over government formation, hardly anybody had any real clue as to what was happening behind the scene.

Besides the three leaders, some in the party are also hopeful about the prospects of Suresh Khanna and Satish Mahana, two MLAs who have been elected to the state assembly for eighth and seventh time. Khanna was the BJP legislature party leader in the outgoing assembly.

Names of Shrikant Sharma and Sidharth Nath Singh, two party national secretaries elected as MLAs for the first time, are also being mentioned as probables by a section of leaders, largely because of their proximity to the central leadership.

However, their inexprience is seen as a handicap in a large and complex state like Uttar Pradesh.

Though firebrand five-term Lok Sabha member Yogi Adityanath, 44, is the choice of the more vocal among the party workers, the seasoned ones believe that his brand of politics might not be beneficial for the party in the long run.

Also, his hard line ‘Hindutva’ may not help in carrying along all sections.

The name of amiable Lucknow mayor and party’s national vice-president Dinesh Sharma, 53, is also being discussed. He is a Brahmin.

When contacted, some newly elected MLAs said they have not been officially communicated about any meeting of the legislature party.

Mukut Bihari and Janmejai Singh, who have been elected from Kaisarganj and Deoria respectively, said they have no information about the meeting.

Apna Dal(S) leader and Union minister Anupriya Patel said very soon the people of UP would get their new CM.

Apna Dal(S) is an alliance partner of BJP-led National Democratic Alliance and has won nine seats.

Modi, in one of his election speeches, had said that allies would get a chance in government when the BJP came to power.