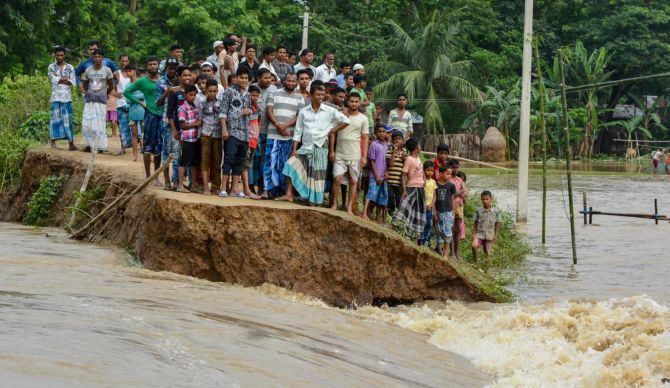 IMAGE: Villagers look on as a part of an embankment is being washed away by the flooding water, at Nam Doboka village in Hojai district of Assam on Friday. Photograph: PTI Photo

The flood situation in the Northeast deteriorated on Friday, with four more people in Manipur and one in Tripura losing their lives, taking the death toll in the region to 12.

The situation worsened in Assam, Tripura and Manipur as train services remained suspended on some routes and roads were washed away.

Nearly four lakh people have been affected across seven districts of Assam.

According to the Assam State Disaster Management Authority (ASDMA), 3.87 lakh people have been affected in Hojai, Karbi Anglong East, Karbi Anglong West, Golaghat, Karimganj, Hailakandi and Cachar districts in the first wave of floods to have hit the state this year.

So far, three persons have lost their lives in landslides and flood-related incidents in different parts of the state.

According to the report issued today, Hailakandi has been the worst-hit with nearly 2.06 lakh people affected, followed by Karimganj with almost 1.33 lakh people.

Due to fresh landslips between the Bandarkhal and Damchara stations, rail movement continues to remain suspended on the Lumding-Badarpur section.

Currently, Dhansiri river at Numaligarh in Golaghat, Jia Bharali at NT Road crossing in Sonitpur, Kopili at Kampur in Nagaon, Barak at AP Ghat in Cachar and Badarpurghat in Karimganj, Katakhal at Matizuri in Hailakandi and Kushiyara at Karimganj town are flowing above the danger mark.

In Manipur, over 1.5 lakh people were marooned in two flood-hit districts as the situation in the Imphal Valley worsened with the death toll rising to six.

The Relief and Disaster Management in a report said the intensity of flooding has been increasing at Thoubal and Imphal West districts with 1.5 lakh people being marooned.

About 12,500 houses have been damaged and 5,200 people moved out of the area, according to latest reports.

Concerned over the devastating flood situation in the state, Manipur Governor Najma Heptulla today said she would donate a day's salary to the Governor's Relief Fund for the flood-affected people.

Heptulla told reporters that the entire Raj Bhavan staff would contribute a day's salary and appealed to others to chip in.

Acknowledging that the flood situation was bad, she said once the water recedes, there is a possibility of outbreak of fever and other diseases and she will discuss the matter with the health minister to take preventive measure.

Officials said the water level continued to rise in Nambol and Thoubal rivers in Bishnupur and Thoubal districts.

Three people have so far died in flood-related incidents in the state.

Currently, 6,000 people are marooned in Khowai district, he said, adding it has caused extensive damage to road connectivity as well as crops.

The Kalilashshar sub-division of Unakoti district, which was badly affected by the flood, is yet to recover from the disaster with over 21,000 people still putting up in relief camps.

In Mizoram, at least 1,066 families have so far been evacuated to safer places due to floods, state disaster management and rehabilitation department officials on Friday said.

The worst-hit villages were south Mizoram Lunglei district's Tlabung town and its surrounding villages as their homes were inundated by the flooding Chhimtuipui river along the Mizoram-Bangladesh border.

Heavy rainfall continued to lash the state again last night and this morning which triggered another massive landslide at Ramlaitui village in Lunglei district which blocked the Aizawl-Lunglei via Thenzawl highway.

Public Works Department's Chief Engineer K Lalsawmvela said excavators were used to clear the debris while the National Highway No 54, which was swept away by landslide near central Mizoram's Serchhip town yesterday, was still not repaired.

Lalsawmvela said that it would take days, if not months, to restore the National Highway as the whole hillock collapsed pulling down around 100 metres of the highway.

The toll in rain related incidents in Kerala since onset of the monsoon rose to 45 on Friday with the recovery of the body of a baby girl and a teenaged boy being washed away in flash floods in the district, officials said.

The body of one and half year old Rifa Mariyam was recovered from under the rubble in a landslide at Kattipara, while Abhinav, 17, was swept away in flash floods near his village in Vadakara taluk, they said.

Miriyam's mother has also been reported missing in the landslide.

A total of six more persons from three families are yet to be traced from under the rubble, officials said, adding search operations were continuing to try and rescue them.

Meanwhile, Chief Minister Pinarayi Vijayan directed authorities to disburse compensation to those who suffered losses and whose property was damaged.

He gave the directions to District Collectors through videoconferencing at the Collectorate at Thiruvananthapuram.

State ministers T P Ramakrishnan and A K Saseendran visited affected areas in Kozhikode district and later told reporters that the delayed arrival of the 50 member National Disaster Response Force team was due to flooded roads and had not hampered rescue and relief operations.

Fire and Rescue Force and police, along with local people swung into action in search of the missing persons, they said.

The NDRF also intensified search operations in the affected areas after their arrival, the ministers said.

The affected people, housed in relief camps, have been provided with food, medicines and drinking water, they said.

Meanwhile, leader of the opposition in Kerala assembly, Ramesh Chennithala, who visited the affected region on Friday, sought a special package for those hit by landslides in the district.

Speaking to reporters later, he demanded action against unauthorised check dams and sought closure of illegal quarries in hilly regions of the district.

He also urged the authorities to set up a NDRF unit in Kozhikode.

On Thursday, the government had issued a red alert in northern districts-Kozhikode, Wayanad, Kannur, Palakkad, Kasargod and Malappuram- in view of heavy rain forecast till June 18.