7/11 trial on, but mastermind safe in Pakistan

The trial of the 13 accused in the Mumbai serial train blasts case resumed at the special Maharashtra Control of Organised Crime Act court in April this year after the Supreme Court green-signalled it.

But intelligence agencies fear the trial, which is likely to drag on, may have a dissatisfactory ending like the 26/11 trial whose mastermind Hafiz Saeed is a free man in Pakistan. Similarly, India will not be able to prosecute the masterminds of the 7/11 attack, as most of them have fled to Pakistan.

The most wanted man in connection with the serial blasts on July 11, 2006, which had claimed 187 lives, is Lashkar-e-Tayiba operative Azam Cheema.

Cheema, 57, is based at the Bahawalpur camp of the LeT in Pakistan from where he plans to export terror to New Delhi and Mumbai, say sources in the Intelligence Bureau.

Cheema, also known as Babaji, has been a key operative of the LeT since the early 1990s. His expertise in planning terror strikes has helped him reach the top rungs of the dreaded outfit, and Cheema has been training Lashkar cadres in the terror camps, say IB sources.

Cheema used to head the LeT's intelligence division but his recent responsibilities indicate that the Lashkar is making its operations more city-specific, say IB officials.

Cheema had attempted a terror attack in New Delhi in 1998, but it was foiled. He has managed to set up a route via Bangladesh and Nepal to export explosives into the country with the help of his foot soldiers, say IB sources.

His biggest operation till date was the serial blasts that rocked Mumbai's local trains in 2006, which he orchestrated with the help of the Students Islamic Movement of India. He visited Mumbai several times between 1999 and 2006, and was present in the central suburb of Chembur in the city when the attack took place, say sources.

The names of the wanted accused in the 7/11 case have been included in the dossiers sent to Pakistan. They are Cheema, Abdul Karim Tunda, Rahil Abdul Rehman Sheikh, Sheikh, Zulfikar Fayyaz Qazi and Zabiuddin Ansari.

The apex court had in February 2008 stayed the trial after one of the arrested accused, Kamal Ansari, moved the court challenging the constitutional validity of a particular section pertaining to insurgency in the MCOCA.

The Supreme Court had on April 25 this year dismissed the petition and vacated the stay on the trial. 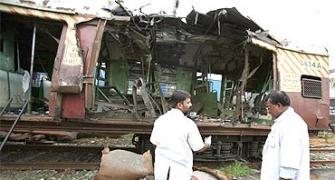