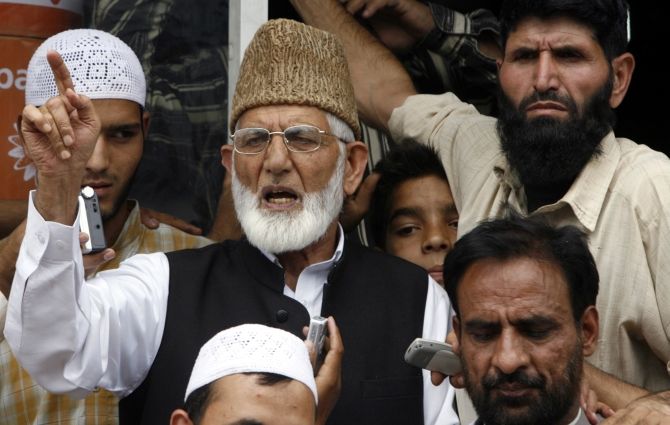 Four Kashmiri separatists, including the son-in-law of Hurriyat leader S A S Geelani, were sent to judicial custody on Monday by a Delhi court in a terror funding case.

The court's order came after the National Investigation Agency submitted that they were not required for further interrogation.

The agency had arrested seven persons on July 24 in the case of alleged funding of terror and subversive activities in the Kashmir Valley to fuel unrest.

The other three separatist leaders -- Shahid-ul-Islam, Farooq Ahmed Dar and Mohamad Akbar Khanday -- were sent to the judicial custody till September 1.

The money was being raised to fund separatist and terror activities in restive Jammu and Kashmir, NIA had alleged, claiming that the accused were waging war against the country and were involved in various offences punishable under the Unlawful Activities (Prevention) Act.

It had also alleged that the accused were involved in creating unrest by way of anti-India demonstrations and bandhs, which were done on their and others' instructions.

Shah was in the custody of Jammu and Kashmir Police, which had put him under preventive detention immediately after Eid last month.

Geelani's close aides, Tehreek-e-Hurriyat spokesman Ayaz Akbar and Peer Saifullah, were arrested by the NIA from the Valley.