With its ultras in Jammu and Kashmir constantly on the run in the wake of stepped up operations by security agencies, the Hizbul Mujahideen has asked its POK-based leadership to sneak into India and strike in a big way.

"Sneak into India fast and do something big," said an HM commander to one of the outfit's leaders based in Pakistan Occupied Kashmir during a conversation intercepted recently by security agencies, officers of the Indian Army  on Wednesday said.

The call for infiltration given by an HM commander on this side of the border to his POK-based counterpart is being seen by the Indian Army as a sign of growing frustration among HM cadres after elimination of a large number of the militant outfit's top rung leaders in encounters in the recent past.

"As is evident, terrorists especially leaders have been on the run in both Kashmir valley as well as in Jammu region due to increasing number of encounters initiated by security forces in past," army officers said.

"As compared to the past practice of staying in hideouts, militants have changed their tactics and are now regularly on the move, not staying in one house for more than three hours due to fear of encounters", they said.

They do not trust the local population whether Hindus or Muslims any more and are always on the run trying to revive lost ground, they said.

53 self-styled commanders from different outfits- 22 of Lashker-e-Toiba (LeT), 23 of HM, five of Jaish-e-Mohammad (JeM), one of Harkat-ul-jehadi Islami (HUJI) and one of Albadr were killed in 2009, which included the Hizb's Deputy Chief of Operation Shabir Ahmed, top Divisional Commanders of JeM, HM and LeT- Abdullah Satar, Saqib and Yousuf Gujjar.

As many as 37 militants were killed in 2010 till May 15, they said, adding, it included 22 commanders of Hizb, LeT and JeM.
Therefore, the aim of the Inter Services Intelligence (ISI) and the militant leaders in Pakistan is to regain the lost initiative and bring these areas in J&K back in national and international focus by trying to impose and infiltrate foreign militants in J&K.

This can be gauged from the fact that there have been 56 infiltration attempts, five ceasefire violations, 126 militancy-related incidents and 45 encounters since January this year in which a total of 73 people have been killed, including 18 civilians, 19 security personnel and 37 militants. 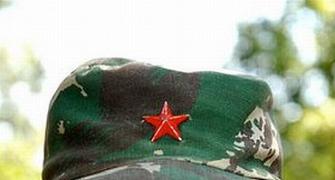 'Indian army is being used against its own people'