What India's secularists can learn from south-east Asia 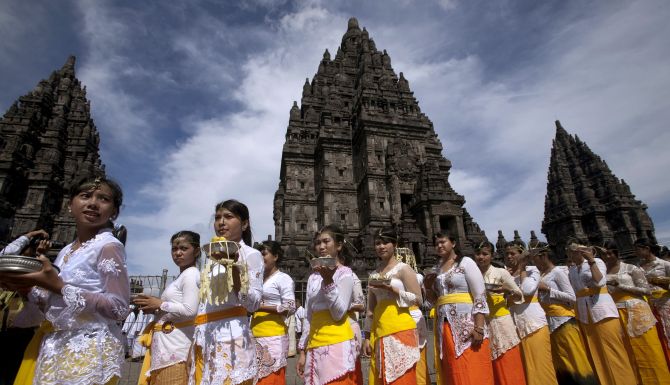 Colonel (retd) Anil Athale on how India can learn from the way many Muslim-majority countries in south-east Asia have protected their Hindu and Buddhist heritage.

The Merdeka Square in Kuala Lumpur, Malaysia, is sort of India Gate and Rajpath in New Delhi. There right next to the Independence tower is a huge mural of Krishna telling the Bhagvat Gita to Arjuna. The beautiful mural with Krishna and Arjuna riding in a chariot driven by eight horses is one of the biggest in the world. It is called ‘Arjun Vijaya’.

Whenever there is a talk of Indian influence in south-east Asia, Indians instinctively refer to Bali, the island of Indonesia. Little do we realise that the greatest treasures of Indic civilisation (Hindu as well as Buddhist) are to be found in Muslim majority Java (where 90 percent population follows Islam). Where is the world’s largest Buddhist Stupa? Or the world’s tallest Hindu temple (155 feet)?

The answer to both these questions is Indonesia at Borobudur and Prambanan respectively! 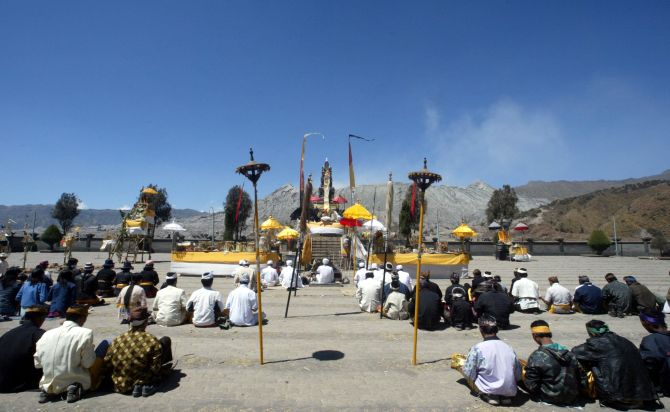 Image: Balinese Hindu worshipers walk during the Tawur Agung ritual ahead of 'Nyepi', Bali's Day of Silence and the Hindu New Year, at Prambanan temple in Yogyakarta
Photographs: Dwi Oblo/Reuters

Indonesian Hindus worshippers pray near MountBromo during the annual Hindu Kasada festival in Pasuruan, East Java, on September 7, 2006. An alert has been issued for MountBromo, an active volcano in East Java, after increasing signs of volcanic activity, an official said Wednesday. REUTERS/Sigit Pamungkas (INDONESIA)

The undisputable fact that Indonesia is also the world’s most populous Muslim majority country makes this combination particularly intriguing especially for Indians. Interestingly, in all of south-east Asia (the author has recently travelled extensively in Vietnam, Laos, Cambodia and Indonesia), despite poverty, there is much less street level crime. The citizens of those countries freely acknowledge that it is the Hindu and the Buddhist influence that is responsible for this. Even common people routinely refer to ‘good karma’ as the basic philosophy of life.

We have been conditioned in the last 60 years or so that the Hindu-Muslim conflict is hardwired into our genes. Indonesia challenges that notion. The Ramayan story is kept alive by puppet shows and ballets. The Ramayana ballet is performed every night in Yogyakarta (capital of province of central Java). This has entered the Guinness Book of World Records as it has been performed every night for the last 29 years!

The biggest retail chain in Indonesia is named: you guessed it -- Ramayana! We in India on the other hand have recently ‘officially’ declared Sri Ram to be a fictional character. The Indonesians are all fans of Shah Rukh Khan. His film Kuch Kuch Hota Hai is remembered even after 10 years -- somewhat on the lines Russians seem to have taken to Raj Kapoor and his film Awara in an another era. 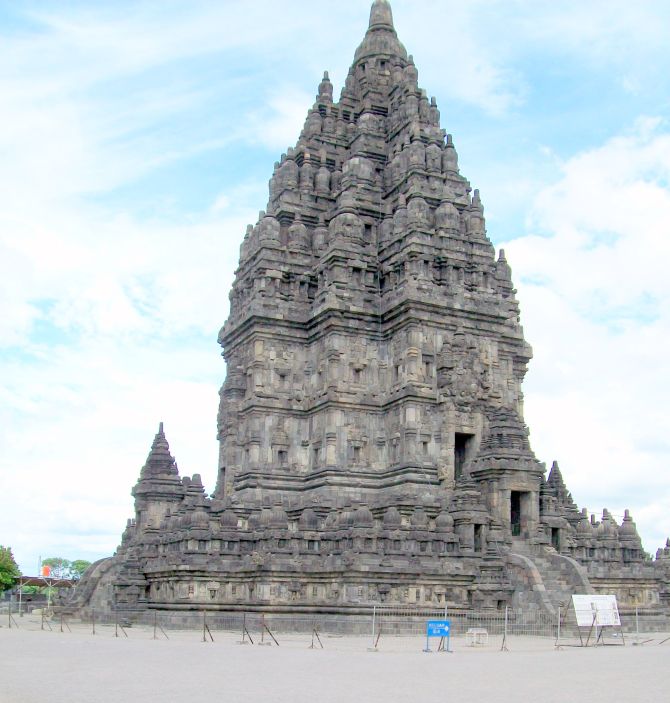 Many in India do not know (or do not want to know) about Indonesia and its connection with India. The Indian civilisational influence is all pervasive in the politically-important and most populous Java island (sort of the Uttar Pradesh of Indonesia) since out of its seven presidents since independence, five have been from Java. The Indian influence is seen in individual names: Malati, Arjun, Bhim or Sanjoy are quite common. It is not uncommon to hear an Indonesian man on the street referring to Ghatotkach (of Mahabharat) as Indonesian Superman! It is not easy to find too many people on the street in India who would even know about Ghatotkacha!

The Indonesian national motto is ‘Bhineka tugal Ika’ or unity in diversity. The credit for this approach of pluralism goes to the Majapahit kings of the 12th century. Aware that his subjects were both Buddhists and Hindus, the wise king decided to make this the centre piece of his policy of religious tolerance. Though many in India claim that the concept of unity in diversity is the gift of India’s first family! What is most remarkable about Indonesia is the great care this Muslim majority country takes to preserve their ancient Hindu and Buddhist heritage.

In 2010, the Merapi volcano near Borobudur erupted and the huge monument was covered with volcanic ash. The Indonesians worked tirelessly for two years to clean it with hand and with small brushes! The whole attitude of the Indonesians towards their historical past is in direct contrast to what happened in the Indian subcontinent in the Middle Ages. Interestingly, while the Indonesian Muslims created the Gita mural in Jakarta in 1980s, their co-religionists in Afghanistan were destroying the 2000-old Bamiyan Buddhas!

This author has travelled extensively in India as well as south-east Asia. One can say without hesitation that the carvings and statues in Java museums and temples are the best example of art and craftsmanship. The stunning statue of ‘Laxmi’ in Jakarta museum in precious metal section (despite being made of stone) is explained as the finest example of Indonesian craftsmanship.

'So called secularists carry the greater guilt for dividing society' 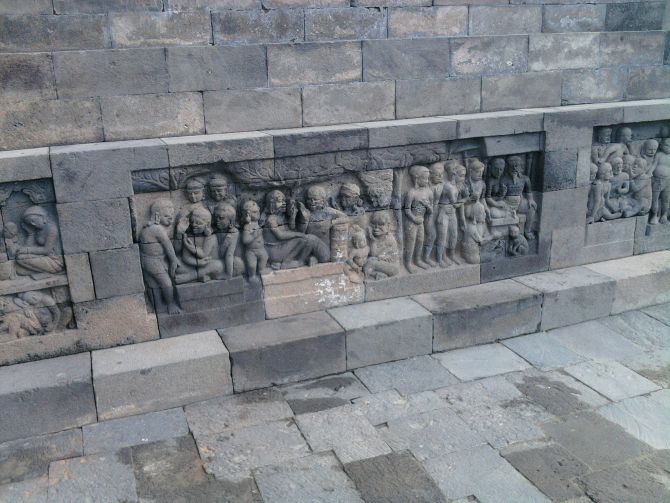 It is time citizens of India take away the inter-community relations from the divisive electoral politics. Public intellectuals must launch a debate over the issue of meanings of secularism, Hindutva and the Indian Constitution. One sincerely wishes that all these loudmouth secularists as well as Hindutva votaries take a trip to Yogyakarta in Indonesia.

But that is unlikely to happen since how will the minority vote be consolidated? This may seem like a biased view, but the fact is the so called ‘secularists’ carry the greater guilt for dividing society. The reason for this is that they have deliberately ignored the core values of Indian civilisation that not just accept but celebrate diversity.

It is not unusual to have a father who is a devotee of Shiva while the son becomes Vaishnav or follower of Vishnu. If superimposed on the Semite faiths it is like a father being Protestant while the son is Catholic!

Since this is the essence of Indic civilisation, is it any wonder that the largest number of visitors to holy sites of Muslims, Christians or Sikhs, are not followers of those faiths but Hindus. Mark Tully in his book No Full stops In India has aptly said that India is a Hindu nation forced to wear the ugly formless garb of Western secularism.

Hindu nationalism is a backlash against this pedantic Nehruvian aspiration, the 50-year-old soulless construct that sunders religion from its natural place in Indian public life.

The communal divide in India is less on the basis of religious differences. It is a product of ignorance of communities about each other and our own history. In a secular and multi-religious society like the ones in India, this must be dealt at the grassroots level. School curricula (whether in the Saraswati Shishu Mandir or madarssas or convents) must teach young children the basic tenets of all religions.

The top religious scholars of all religions should be asked to design the lesson on their respective religions. Muslim children must know about Hinduism and Hindu children must know about Islam! There should be no exception. Once this is enforced, the future citizens will realise that there is much that is common to all of them. This will render ineffective the politicians and clergy who thrive on divisions. Enforcing secularism at grassroots level is the only long-term solution to banish religion-based conflict in India.