After 26/11, Pakistan's backers have nowhere to hide 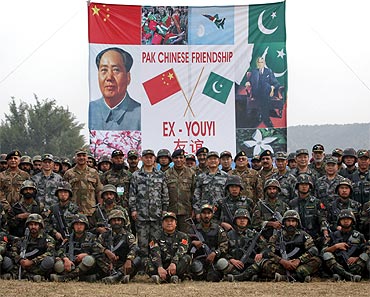 The 'double-dealing' of the US and Pakistani army -- all with the ambition of military dominance -- has significantly aided various terrorist groups. After 26/11, there is no place to hide for the Mike Mullens and countless others who have been apologists for the Pakistan Army and the state it controls, says M D Nalapat

In September, the recently-retired United States Joint Chiefs of Staff, Mike Mullen, warned of the risks to international security because of the propensity of the Pakistan Army to back -- sometimes covertly, but usually openly -- Wahabbi extremist fighters. However, he left unsaid the name of the country that has been most responsible over six decades for causing this risk to develop.

Since the 1950s, the Pakistan Army has been, in a significant way, the creation of the US military and intelligence services, including its fraternisation with jihadis. Even as the former admiral was talking of the 'double-dealing' of the Pakistani military, US military and intelligence officers were going through the very same 'double-dealing' machinery in order to gain access to elements such as the Taliban.

And as before, they were using the Pakistan side to gain information about the country that has become the biggest challenger to US military dominance -- China.

Prior to the fall of the Soviet Union in 1991, the US had teamed up with China in encouraging the Pakistan Army to weaken its Indian counterpart through non-conventional and clandestine methods. 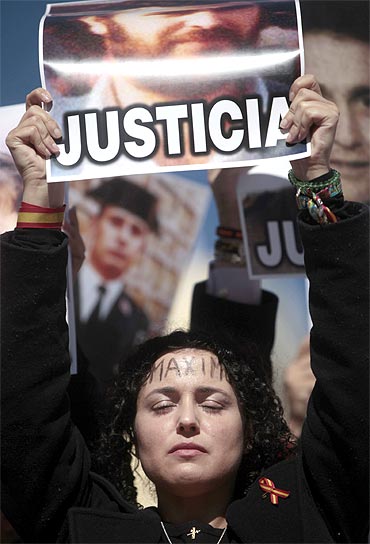 Image: The daughter of a victim of the Basque separatist guerrilla group ETA holds her father's picture during a demonstration in Madrid
Photographs: Susana Vera/Reuters

After that, Washington's policy changed to one of benign acquiescence to the ISI's operations in India -- even after 9/11. It was only after the 26/11 attacks showed that Western interests were almost as much at risk as India's that the US began to actually -- as distinct from formally -- discourage Islamabad from using Wahabbi and other proxies to launch attacks within India.

Of course, China's People's Liberation Army has, to date, continued the policy of seeing in the ISI's antics a useful way of slowing down the progress of a country that it sees as a rival -- India.

It was easy to play these games in the early days. Till 9/11, the US regarded Wahabbi-based terrorism as a problem far from home. This perception was shared by many Europeans, even though other manifestations of the scourge had for decades hit the continent, such as the actions of the Basque separatists in Spain or the IRA in the United Kingdom.

The latter country, in fact, prided itself on the sanctuary it afforded to any extremist who was a self-labelled 'freedom fighter.' To this day, collections are made by citizens of the UK, which are sent directly to organisations active in Kashmir or for the Naga insurgency. The latter is made possible by Anglican church groups which still have collections for 'charities' active in Nagaland that oppose Indian 'domination' -- without a peep from Indian authorities.

The government of India is far too genteel 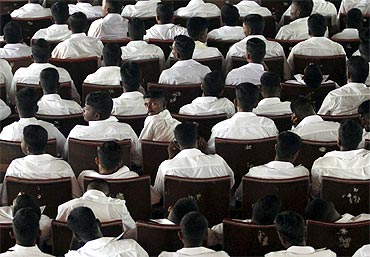 Image: A former LTTE cadre looks back during a reintegration ceremony in Colombo
Photographs: Dinuka Liyanawatte/Reuters

In the past, a large share of the funds used by the Khalistan movement was formed out of collections made in cities such as Los Angeles and Toronto. In fact, the latter location, together with Paris, was a prime source of funds utilised by the Liberation Tigers of Tamil Eelam until its 2009 collapse at the hands of the Sri Lankan Army.

These days, countries that are more 'progressive' in Europe, notably Norway, have picked up some of the slack, encouraged by a state that believes it has a magic wand that can turn extremists into good citizens in any part of the globe.

Flush with cash and with a taste for exotica, Norwegian-funded NGOs have blossomed in conflict locations, usually on the side of those confronting established authorities. Should the Sri Lankan or another government ask Interpol for an international arrest warrant to be issued against those funding and otherwise backing groups engaged in organised violence, it may have some effect on the volume of such 'Good Samaritan' contributions.

The government of India is, of course, far too genteel to even think of such measures, no matter what the havoc such funds collected from the 'civilised world' have done to its internal security.

Since 1947, Pakistan Army relied on irregulars 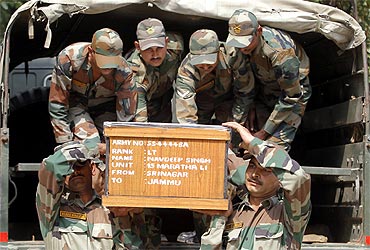 Image: Indian Army soldiers carry the coffin of an officer who was killed in a clash in Kashmir
Photographs: Danish Ismail/Reuters

While others may argue that it is better late than never that the former chairman of the Joint Chiefs of Staff realised the truth about the ISI and the broader Pakistan Army, the reality is that the fusion of the military in that country with terrorists has been known across the globe.

In its very first war, waged against India over Kashmir during 1947-1948, the Pakistan Army relied on irregulars armed by itself to soften up resistance from the forces of the Maharaja of Kashmir.

This fact was not unknown to Pakistan's backers in the United Nations, notably the US and the UK, both of whom succeeded in making a fool out of Prime Minister Jawaharlal Nehru when the latter placed the issue of Pakistan's aggression before a UN Security Council -- a body dominated by those unhappy with his anti-colonial rhetoric and impressed with the effusive promises of Pakistan to remain as loyal a follower of the superior wisdom of the Occident as Mohammad Ali Jinnah was of Winston Churchill.

A hole in the ozone layer of counter-terrorism strategy 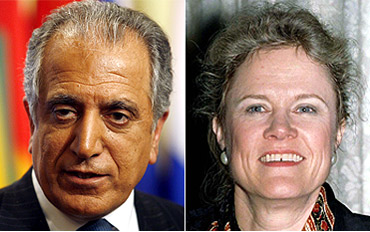 "That's because you're an Indian (that such a point was made)," was the comment of a State Department analyst who was introduced as an expert on South Asia. Despite the first World Trade Centre attack -- and its obvious link to Pakistan -- the Clinton administration remained in total denial about the actual nature of the only organised military in the world that has jihad as its motto.

Small wonder that a year prior to the (1995) meeting, former assistant secretary of state for South Asia, Robin Raphel and US Ambassador to Afghanistan Zalmay Khalilzad, had already begun the programme of facilitation that ensured the takeover of 86 per cent of Afghanistan by the Taliban in 1996.

A check of the output of journalists of that period will show the credulity of the US and UK media of the actions and analysis of Raphel and other Pakophiles within the Beltway.

Faith in the Pakistan military, and in the Wahabbi elements within the ruling elites of the Gulf Cooperation Council countries, comprise the hole in the ozone layer of counter-terrorism strategy -- a gap through which numerous terrorist groups and individuals have escaped punishment.

Taliban will continue as a potent threat 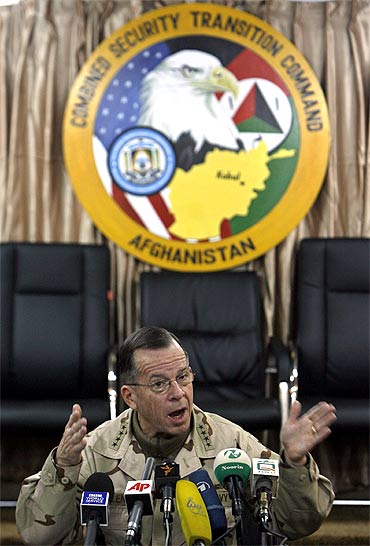 Image: A file photo of former chairman of US Joint Chief of Staff Admiral Mike Mullen at a news conference at Camp Eggers in Kabul
Photographs: Omar Sobhani/Reuters

Till today, the US hesitates to place international sanctions against even those members of the ISI that the Defence Intelligence Agency and the Central Intelligence Agency know are aiding terror groups, in contrast to their zeal against a defanged and collaborative Muammar Gaddafi.

Until the United States accepts that the only path to success in cleansing Afghanistan of significant terror groups is to take the war to the Pashtun areas as a whole, including those located in Pakistan, the Taliban will continue as a potent threat.

The former Soviet Union made the mistake of not even trying to interdict weapons and explosives supplies from Pakistan that had been flowing into Afghanistan since 1978. President Barack Obama has been more robust in the drone programme than the pro-Pakistani Defence Secretary Dick Cheney allowed George W Bush to be.

But these attacks -- like those on Mumbai -- represent only a small fraction of the attention needed to be paid by the Pentagon to the Pashtun territories as a whole.

And after 26/11 (which incidentally this columnist was the first to expose as being an ISI operation in UPIAsia.com), there is no place to hide for the Mike Mullens and countless others who have, throughout their careers, been apologists for the Pakistan army and the state it controls.