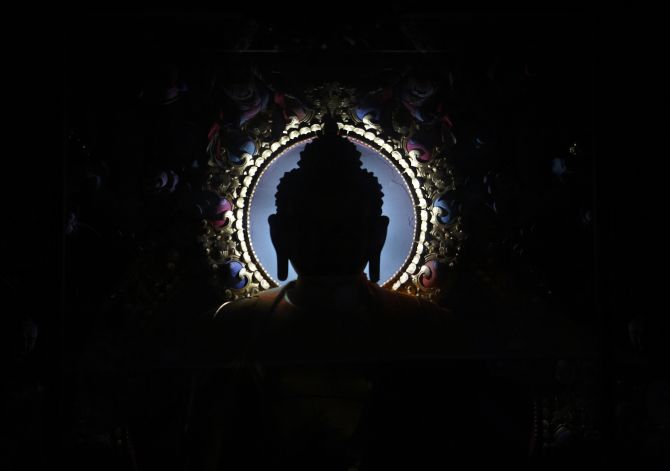 Image: An idol of Buddha is silhouetted at the Tibetan Monastery in Lumbini, south-west of Kathmandu
Photographs: Navesh Chitrakar/Reuters

The key discovery of the oldest 'Buddhist shrine' at Buddha's birthplace in Nepal will throw more light on one of the world's earliest religions, archaeologists have said.

The international team, led by Nepal's top archaeologists Robin Coningham and Kosh Prasad Acharya, said the discovery at Lumbini in western Nepal contributes to a greater understanding of the early development of Buddhism as well as the spiritual importance of the place.

Recent excavations within the sacred Maya Devi Temple at Lumbini, a UNESCO World Heritage site long identified as the birthplace of the Buddha, uncovered the remains of a previously unknown sixth-century BC timber structure, suggesting the sage may have lived earlier than thought. 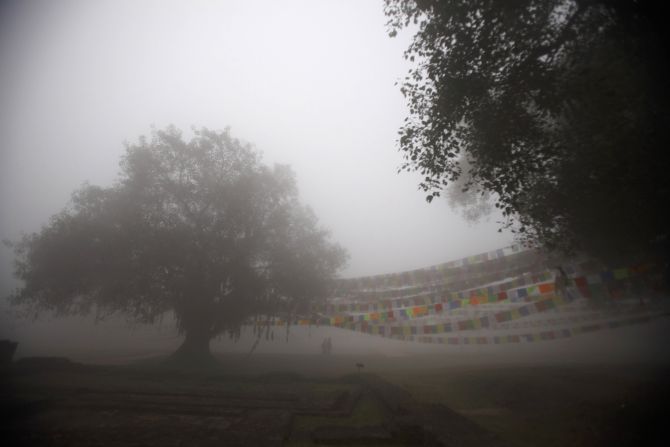 Image: People walk past prayer flags on a foggy morning at the Maya Devi Temple in Lumbini
Photographs: Navesh Chitrakar/Reuters

"This is the first archaeological material linking the life of the Buddha -- and thus the first flowering of Buddhism -- to a specific century," UNESCO Nepal office said in a release.

"Very little is known about the life of the Buddha, except through textual sources and oral tradition," said lead researcher Coningham from DurhamUniversity's Archaeology Department.

"Now, for the first time, we have an archaeological sequence at Lumbini that shows a building there as early as the sixth century BC," Coningham said.

There is dispute over the birth date of Buddha, many scholars believe that the sage lived and taught in the 4th century BC and died at the age of 80.

However, Nepalese authorities favour 623 BC as the birth date of Buddha, though other traditions favour more recent dates, around 400 BC. Now with the new excavations, it has been confirmed that the Buddha's birth could have taken place in seventh century BC as claimed by the Nepalese authorities or even earlier than that period, says Nabha Basnet, an official at UNESCO Nepal office. 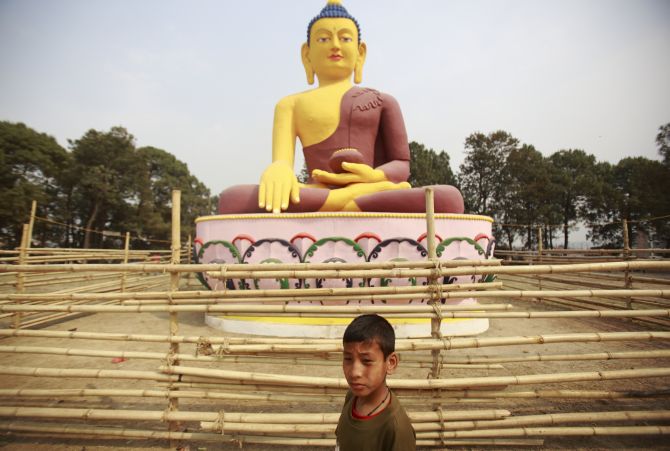 Image: A child plays in front of a giant idol of Lord Buddha in Lalitpur
Photographs: Navesh Chitrakar/Reuters

To determine the dates of the timber shrine and a previously unknown early brick structure above it, fragments of charcoal and grains of sand were tested using a combination of radiocarbon and optically-stimulated luminescence techniques.

Geoarchaeological research has confirmed the presence of ancient tree roots within the temple's central void.

The archaeological investigation was funded by the Government of Japan in partnership with the Nepal government under a UNESCO project aimed at strengthening the conservation and management of Lumbini.

"UNESCO is very proud to be associated with this important discovery at one of the most holy places for one of the world's oldest religions," said UNESCO Director-General Irina Bokova.

"The Government of Nepal will spare no effort to preserve this significant site."

Lumbini is one of the key sites linked to the life of the Buddha besides Bodh Gaya, where he got enlightenment; Sarnath, where he first preached; and Kusinagara, where he passed away.

Except Lumbini, the birth place of Buddha, other three important sites linked to Buddha's life are situated in north India. 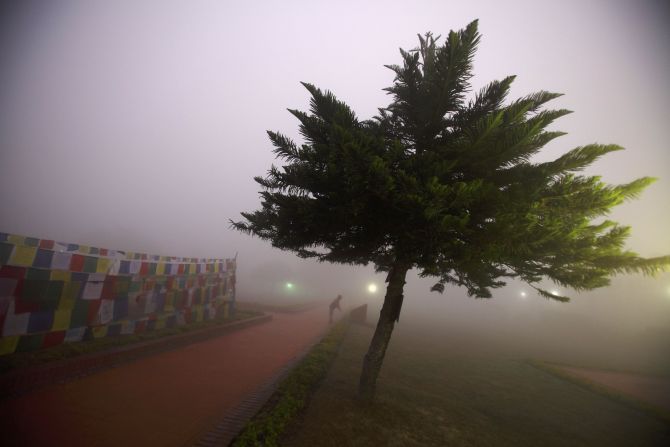 Their peer-reviewed findings are reported in the December 2013 issue of the international journal Antiquity.

Buddhist tradition records that Queen Maya Devi, the mother of the Buddha, gave birth to him while holding on to the branch of a tree within the LumbiniGarden, midway between the kingdoms of her husband and parents.

Lost and overgrown in the jungles of western Nepal in the Medieval period, ancient Lumbini was rediscovered in 1896 and identified as the birthplace of the Buddha on account of the presence of a third-century BC pillar.

The pillar bears an inscription documenting a visit by Indian Emperor Asoka to the site of the Buddha's birth as well as the site's name - Lumbini.

Despite the rediscovery of key Buddhist sites, their earliest levels were buried deep or destroyed by later construction, leaving evidence of the very earliest stages of Buddhism inaccessible to archaeological investigation, until now.

Half a billion people around the world are Buddhists, and by 2020, some 22 million Buddhist pilgrims are expected to visit South Asia. Many hundreds of thousands make a pilgrimage to Lumbini each year.