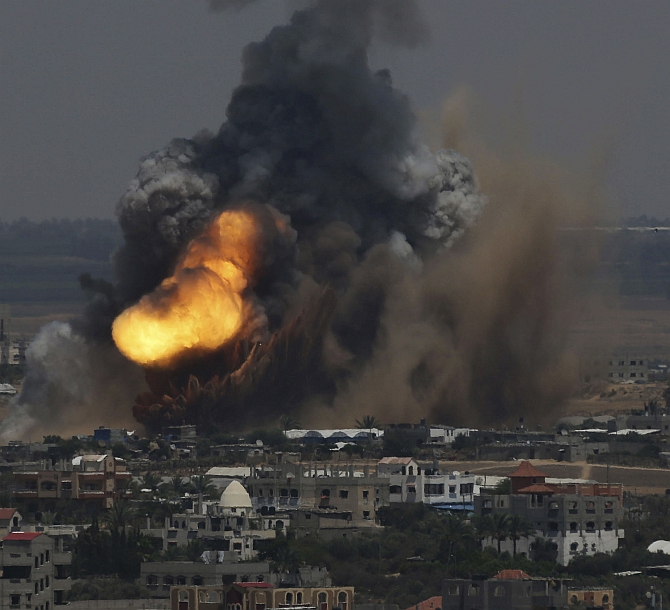 It briefly launched a ground operation inside the Hamas-ruled Gaza Strip, as its military jets pounded more than 200 targets over the last 24 hours in the bloodiest conflict since 2012 that's seen more than 160 Palestinians killed. 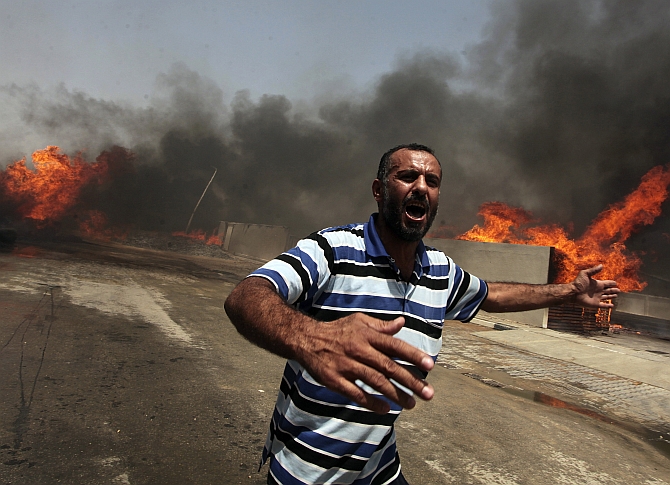 Image: A Palestinian reacts in front of a fire which police said was caused by an Israeli tank shelling in the industrial area in the east of Gaza Cit
Photographs: Ashraf Amrah/Reuters

Four Israeli commandos from the elite Shayetet 13 unit were injured in a special operation after their team became the first known soldiers to enter the Gaza Strip to destroy what the army described as a rocket-launching site.

The Israeli jets later dropped leaflets warning residents of northern Gaza Strip to evacuate their homes ahead of their "short and temporary" campaign to begin sometime in noon. 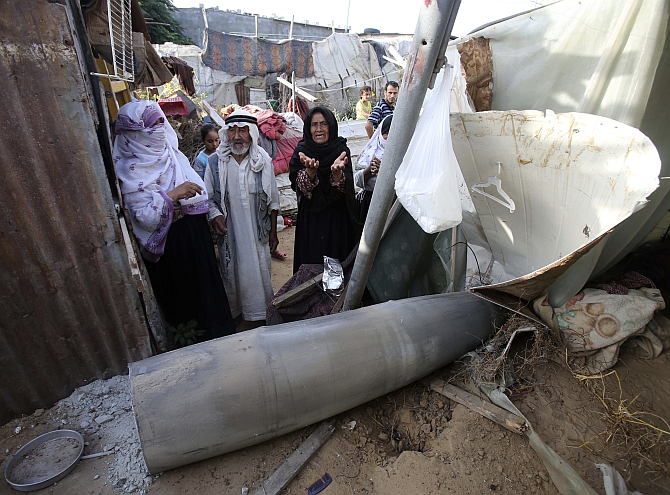 Image: A Palestinian woman gestures as she stands behind a missile which witnesses said was fired by Israeli aircraft, at a shack belonging to Bedouins in Rafah, in the southern Gaza Strip
Photographs: Ibraheem Abu Mustafa/Reuters

The specially trained commandos attacked a building in Gaza overnight from where dozens of long-range rockets have been fired at Israel reaching the skies over Tel Aviv and even further north, the Israeli army said.

"The target was destroyed and the four wounded soldiers were evacuated to Barzilai Hospital in Ashkelon," a spokesman for the Israel Defence Forces said.

Ignoring international appeals for a ceasefire, a senior security official has said the operation in northern Gaza is necessary because the area accounts for far more rocket attacks than other areas. 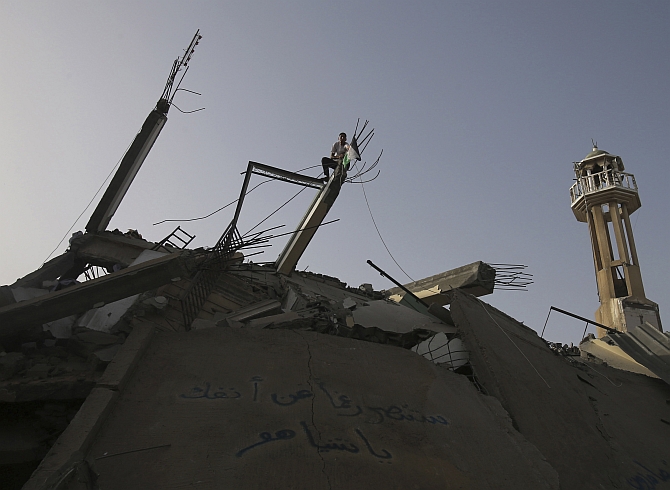 Image: A youth puts up a Palestinian flag over the rubble of a mosque, which police said was destroyed in an Israeli air strike, in Nuseirat in the central Gaza Strip
Photographs: Ibraheem Abu Mustafa/Reuters

The IDF struck 200 targets in Gaza over the past 24 hours, including civilian institutions and mosques with suspected Hamas ties. The other targets include 53 underground rocket launchers, 11 rocket production and storage centers, nine Hamas command and control centers, and five training camps.

Some 1,320 targets have been hit by the IDF since the start of the six-day operation to stop rocket attacks from Gaza on southern Israel. 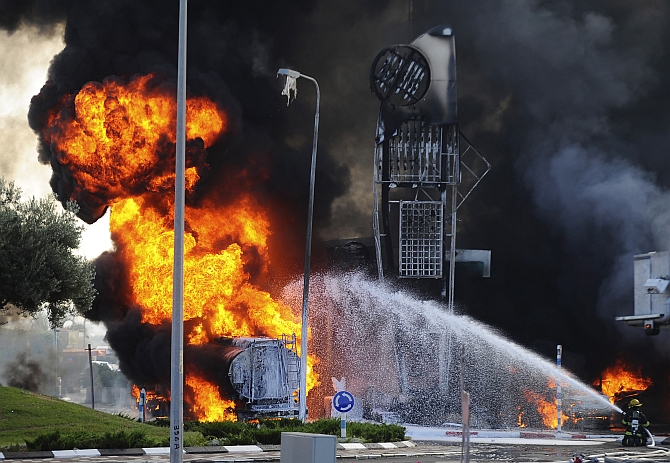 Image: Israeli firefighters extinguish a fire that broke out after a rocket hit a petrol station in the southern Israeli city of Ashdod
Photographs: Avi Roccah/Reuters

The Israeli jets have also struck 62 buildings and 14 Hamas command rooms since Monday, holding the Islamist faction that has ruled Gaza since June 2007 responsible for the latest escalation.

Some 160 Palestinians have so far been killed and more 1,000 people -- mainly civilians -- have been injured in the Israeli offensive, medics in Gaza said.

In response, Palestinian militants have launched more than 800 rockets at Israel, including 130 in the last 24 hours, the Israeli military said on Sunday. 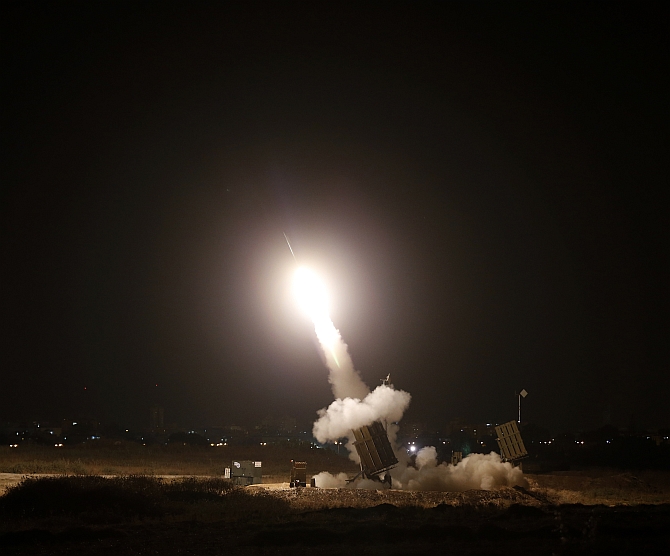 During one of the Israeli strikes, a house belonging to Hamas police chief Taysir Al-Bardge was targeted due to the presence of weapons in it, Israeli security sources said. Twenty one people are said to have died in the bombing.

Israel also hit a residential home for disabled people in Beit Lahiya, killing two severely handicapped women in the care facility, Palestinian officials said. There have been no Israeli deaths so far.

Meanwhile, three rockets fired from Lebanon have hit northern Israel, without causing any casualties. Israel believes the rockets were fired by Palestinian organisations. 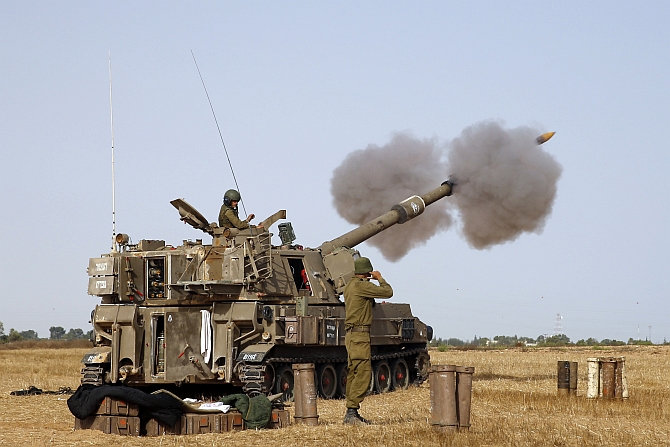 "We are sure it was not Hezbollah. We are keeping oureyes open in the Northern Command," a security source told the Jerusalem Post.

to end their hostilities in Gaza, calling on both sides to respect "international humanitarian laws" and return to the "calm and restitution of the November 2012 ceasefire."

Tensions rose last week with the murders of three young Israelis in the occupied West Bank and a Palestinian teenager in Jerusalem. Israel says Hamas was behind the abduction and murder of the Israeli youths -- a claim it denies.

A day after their funerals, the Palestinian youth was abducted in East Jerusalem and murdered. Police have arrested six Jewish suspects and say it seems the 16-year-old was killed because of his nationality.