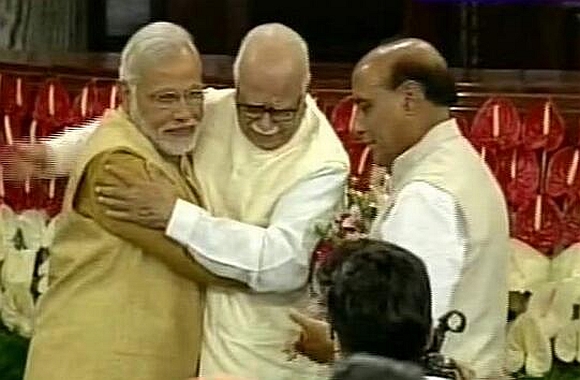 Constituents of 29-party National Democratic Alliance on Tuesday chose Narendra Modi as their leader hailing him as "strong" personality with "extraordinary capabilities" under whom the country will prosper and attain a major stature in the world.

In his brief acceptance speech, Modi said even though the Bharatiya Janata Party got a majority on its own in the Lok Sabha polls, NDA allies will be as important for him as they would have been without it. The TDP chief and former NDA convenor Chandrababu Naidu said under Modi's prime ministership, India will find a place among the world powers with "real competition" being with the US and China.

"In this nation building activity, we are one partner with Narendra Modi. We extend on behalf of the Telugu Desam Party all cooperation for his great job in cleaning the country and also developing the nation," he said.

"I have seen so many leaders, but his determination, and also enthusiasm in doing things is extraordinary," he said.

Shiv Sena chief Uddhav Thackeray, while expressing his party's support, said for 25 years, it has just been a struggle for the BJP-led alliance and now "good days have commenced".

LJP leader Ram Vilas Paswan said the "miracle" of the NDA getting so many seats in the Lok Sabha polls was possible only because Modi was projected as the prime ministerial candidate.

He said the responsibility was "not a garland of flowers but a crown of thorns" and it was important to deliver on promises in a time-bound manner. Describing the electoral verdict as a mandate for development, Paswan said it has exposed those indulging in caste and minorities politics. 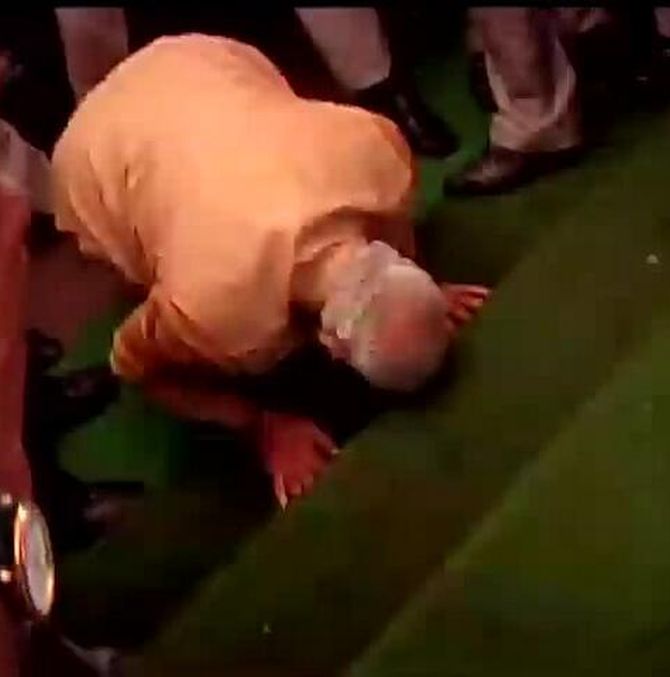 Image: Modi touches his forehead on the steps at the entrance of the Parliament.
Photographs: ANI's Twitter page

Asserting that the country needed a "strong" and "not helpless" prime minister, the LJP leader said, "Those (countries) who used to dare India, are now hiding like cats" as Modi is going to take charge.”

In his acceptance speech, Modi told the NDA constituents that the government would be "yours" and it has to be run collectively.

He appreciated the work done by the NDA constituents in their respective regions, saying they had set an "example of hard labour" which demonstrates their commitment above politics.

Modi recalled that the NDA had started the march in the Lok Sabha polls with three parties and by the time the polls concluded, the convoy comprised 29 parties.