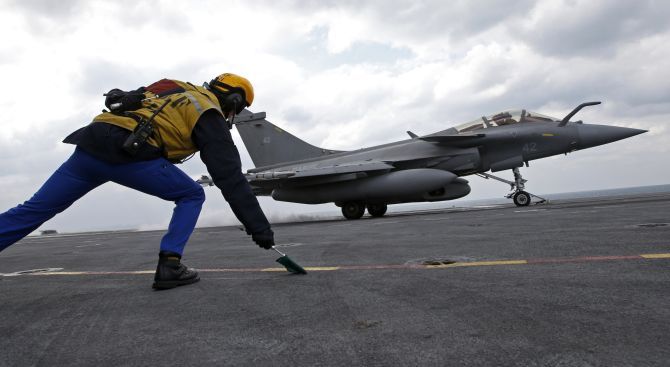 The Supreme Court is scheduled on Friday to pronounce verdict on pleas seeking court-monitored probe in the multi-billion dollar Rafale fighter jet deal with France.

A bench headed by Chief Justice Ranjan Gogoi had reserved its verdict on a batch of pleas on November 14.

Advocate M L Sharma was the first petitioner in the case. Later, another lawyer Vineet Dhanda had moved the apex court with the plea for court-monitored probe into the deal.

After the three petitions were filed, former Union ministers Yashwant Sinha and Arun Shourie alongwith activist advocate Prashant Bhushan had moved the apex court with a plea for a direction to the Central Bureau of Investigation to register a first information report for alleged irregularities in the deal.

The Centre has defended the deal for 36 Rafale fighter jets and opposed public disclosure of the pricing details.

India signed an agreement with France for the purchase of 36 Rafale fighter aircraft in a fly-away condition as part of the upgrading process of Indian Air Force equipment. The deal is estimated to be about Rs 58,000 crore (about $8 billion).

While reserving the verdict, the apex court had said that the pricing details of Rafale jets could only be discussed after it decides on whether to make it public.

The observation by an apex court bench had came after the government refused to publicly divulge pricing details of the deal, saying it would give advantage to India's enemies.

While hearing a bunch of pleas alleging criminality in Rafale deal and seeking court-monitored probe into it, the apex court had asked wide-ranging questions from the government on issues including lack of sovereign guarantee from the French government, selection of Indian offset partner by the Dassault Aviation and need of entering into Inter-Governmental Agreement (IGA) with France.

The court had taken note of submissions and counter arguments on pricing of the fighter jets with the petitioners alleging that the government has been giving 'bogus arguments' and 'hiding behind the secrecy clause'.

Vehemently defending non-disclosure of price publicly, Attorney General K K Venugopal, appearing for Centre had said that the cost of a bare Rafale jet as per 2016 exchange rate was Rs 670 crore and the disclosure of price of a 'fully loaded' aircraft would give an 'advantage to the adversaries'.

Bhushan had claimed that the Union Law Ministry had red-flagged two issues -- absence of sovereign guarantee by France and international arbitration clause in IGA as per which the arbitration seat would be at Geneva -- but the government went ahead with the deal.

Venugopal had admitted that there was no sovereign guarantee, but said that France has given a 'letter of comfort' which would be good enough as a governmental guarantee.

The court during the hearing on the bunch of pleas had also interacted senior Indian Air Force officers and enquired about the requirements of the force.

The IAF officers had emphasised in the apex court the need for induction of 'four plus or fifth' generation fighter aircraft like Rafale, which have niche stealth technology and enhanced electronic warfare capabilities.