The Supreme Court on Monday said it will hear on December 18 pleas of the Congress and former Maharaja of Tripura Pradyot Kishor Deb Barman challenging the constitutional validity of the Citizenship Amendment Act. A bench headed by Chief Justice S A Bobde said it will hear the pleas along with other pending matters coming up for hearing on December 18.

Senior advocate Abhishek Manu Singhvi mentioned for urgent listing the two pleas and said they should also be heard along with a similar plea filed by the Indian Union Muslim League that is coming up for hearing on Wednesday.

Several petitions, including those by Congress MP Jairam Ramesh and Trinamool Congress MP Mahua Moitra have been filed in the Supreme Court challenging the constitutional validity of the Citizenship (Amendment) Act 2019.

According to the amended Act, members of Hindu, Sikh, Buddhist, Jain, Parsi and Christian communities who have come from Pakistan, Bangladesh and Afghanistan till December 31, 2014 and face religious persecution there will not be treated as illegal immigrants but given Indian citizenship.

President Ram Nath Kovind had given assent to the Citizenship (Amendment) Bill, 2019 on Thursday night, turning it into an Act.

While Ramesh has said that the Act is a "brazen attack" on core fundamental rights envisaged under the Constitution and treats "equals as unequal", Moitra has said that "patent unconstitutionality" of the law "destroys the plural, multi-religious and egalitarian basis of India's secular fabric, and replaces it with a constitutionally unsustainable religion centric substance."

Ramesh said that substantial questions of law, including whether religion can be a factor to either acquire or deny citizenship in India, arises for consideration of the court as it is a "patently unconstitutional" amendment to the Citizenship Act, 1955.

Moitra has said in her plea that the Act is a "divisive, exclusionary and discriminatory piece of legislation that is bound to rend the secular fabric irreparably, and allow illegal migrants of particular religions to acquire citizenship immediately upon its passage."

She has also sought top court's direction to suspend the operation of the Act and all actions under it pending disposal of her plea.

In their plea, NGOs 'Rihai Manch' and Citizens Against Hate, have said that the Act is "discriminatory and manifestly arbitrary" and violates the fundamental rights, including that of equality before law, and basic structure of the Constitution.

In his petition, Ramesh has sought a declaration that the Act is "ultra vires" the Assam Accord of 1985, the Constitution and violates the international law and obligation approved and agreed by India under international covenants.

Similarly, one of the pleas said the Act "purportedly seeks to provide benefits to victims of persecution. However, the impugned Act goes on to create a division between the persecuted, on the basis of faith and nationality of origin."

The IUML has said in its plea that the bill was against the basic structure of Constitution and intended to explicitly discriminate against Muslims as it extends benefits only to Hindus, Sikhs, Buddhists, Jains, Parsis and Christians. 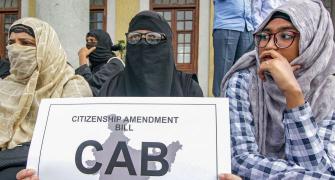