The BJP can only form a government if the PDP splits.
Archis Mohan reports. 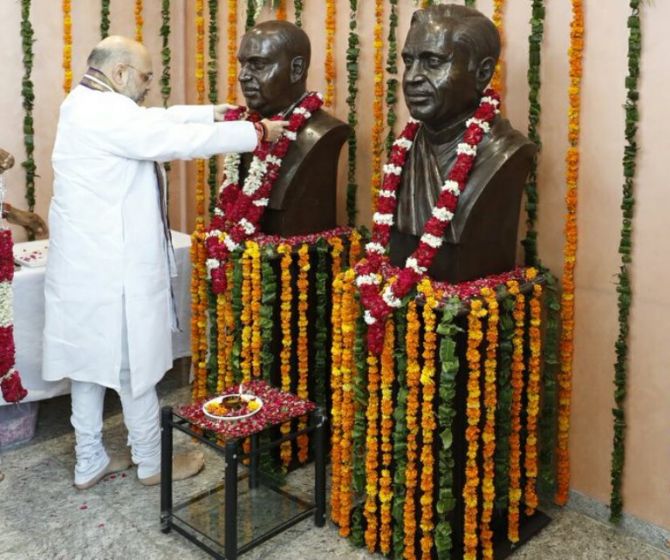 On the occasion of Syama Prasad Mookerjee's birth anniversary on July 6, Friday, the Bharatiya Janata Party's top leadership indicated it is keen to install a "Hindu chief minister" in Jammu and Kashmir soon.

Mookerjee, the founder of the BJP's predecessor, the Bharatiya Jana Sangh, died in 1953 in Srinagar.

He had been leading protests against the special status granted to Jammu and Kashmir and advocated abrogation of Article 370.

The BJP -- and the Sangh Parivar -- hopes to bring the issue of Article 370, part of its core agenda, to boil in the run up to the Lok Sabha election.

At the BJP headquarters in New Delhi, party chief Amit Anilchandra Shah led other leaders to pay tributes to Mookerjee with the battle cry 'Jahan huye balidan Mookerjee, wah Kashmir hamara hai (the Kashmir where Mookerjee sacrificed his life is ours).'

Jammu and Kashmir is currently under governor's rule after the BJP walked out of its coalition government with the Peoples Democratic Party that Mehbooba Mufti had headed.

Party sources said the BJP is exploring options to form a government in the state after the Amarnath Yatra ends by the end of August.

The BJP has 25 legislators in the 87-member state assembly. The PDP has 28, the National Conference 15, the Congress 12 and smaller parties have 7.

The BJP can only form the government if there is a split in the PDP ranks. There are reports of disunity in the PDP.

The Jammu and Kashmir assembly has a six-year term. Elections were held in December 2014.