Reconsider decision on visa to Modi: US lawmaker

Congressman Joe Walsh, a right-wing conservative Republican and a tea party favourite, has written a letter to Clinton, requesting her to consider granting a diplomatic visa to Modi.

The letter attracted strong reactions from the Indian American Muslim community who on Tuesday demanded that the State Department should not change its 2005 policy on Modi's visa.

Clinton is yet to respond to the letter, which was written by Congressman Walsh more than a fortnight ago, but sources in the State Department said there has been no change in its policy with regard to Modi's visa and would not change till the matter is sub-judice.

Taking a strong objection to the efforts of Walsh, the Indian American Muslim Council alleged that the Congressman's letter is factually incorrect.

"It is unfortunate that a sitting member of the US Congress should attempt to make a case based on ignorance of the law which was amended in September 2009, specifically to remove the 24-month restriction," said IAMC president Shaheen Khateeb. 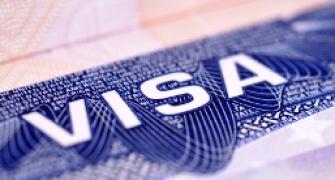 No change in US visa policy towards Indian students

US consul general skirts question on visa to Modi

No US visa for Narendra Modi yet, says Blake