Ready to talk with everybody, says Omar 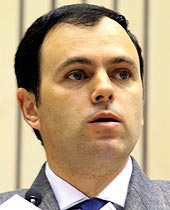 As the crisis that rocked the Kashmir valley shows signs of easing, Chief Minister Omar Abdullah on Wednesday advocated a dialogue between the Centre and "everybody" in the state "who is willing to talk".

Apparently favouring a dialogue with the Hurriyat as well as separatists of all hues, Abdullah told PTI in an interview here, "I think the Centre should talk to everybody who is willing to talk and should also reach out to those who are unwilling to talk."

"Now obviously it will take, (a) a lot of ground work for that and, (b) some sort of ceasefire for the dialogue to go ahead. But I think that needs to be done."

The Centre, he said, should try "some Track II diplomacy like the efforts made in 2000 that led to a ceasefire and dialogue".

During the hour-long interview he answered a wide range of questions, including his handling of the crisis, the controversial decision to call out the army and his plans to address the problems of the youth who have been in the forefront of the agitation in which 15 people have died.

Hitting out at his critics, Abdullah said "the moment one faces difficulties, vultures come out and start circulating" and "no sooner did we hit a period of difficulty couple of weeks ago that influential columnists and writers and other so-called experts on Kashmir started to write the obituary of my government".

In this context, he welcomed the stand of his coalition partner Congress that it was against any change in the state's leadership. "Obviously any signal that goes out clearly does help.....an early end to that debate was useful".

Asked if he had any regrets about the way he had handled the crisis, Abdullah replied, "No, when I look at the actual crisis, well, I regret that the crisis emerged."

"It was easy in our situation to be apologetic about everything, but considering the mood in the valley last week my government deserved credit for giving time to heal and for the anger to settle as well as for the Shab-e-Mehraj prayers to be held as before," he said.

Referring to the resolution passed by an all-party meeting on Monday calling for strengthening of the peace process through internal and external dialogue, Abdullah explained that the feeling was Jammu and Kashmir has "the most healthy gain" from a dialogue between India and Pakistan.

"What they want is that the governments of India and Pakistan should talk to each other and talk about the issue of Jammu and Kashmir as well with a view to finding some kind of long-term solutions to our problems."

"Internally there is this sense that if political dialogue is necessary with all shades of opinion, both mainstream and otherwise, and that was reflected in the resolution."

With regard to the internal dialogue, Abdullah was asked about the conditions such as the withdrawal of the Army, release of political prisoners and repeal of laws like the Armed Forces Special Powers Act (AFSPA) put by the moderate faction of the Hurriyat led by Mirwaiz Umer Farooq.

His view was that any effort to make the dialogue conditional did not help.  "I think it is unfair that you expect the Government of India to engage in an unconditional dialogue while setting conditions yourself."

Unsparing in his criticism of the opposition PDP for boycotting the all-party meeting despite a plea by Prime Minister Manmohan Singh, the chief minister said it had done so for "short-term political gain at long term cost".

In a democracy the opposition can either be constructive or destructive and "unfortunately here, and I regret to say, that PDP chose to play the role other than of being constructive", he said.

Abdullah said that he was not aware of any perception that a section of the Congress party wanted him to be dumped in favour of a coalition with PDP. "I have seen no signs of it either at the Central level or at the state level.

"Obviously all of us were concerned about the situation in the state. But I have received complete backing not only of the Central government but also of the constituents of this alliance government."

About last week's decision to deploy Army to assist the civil administration, Abdullah said it was a security-related decision.

The decision to formally send the army back to barracks should also be left to the government.

Answering a question about nearly six lakh unemployed youth in the state, which is often cited as one of the reasons for the unrest, the Chief Minister said the state did not have the resources to handle the problem and would take the Centre's help.