Ram temple discussions off the table at Kumbh 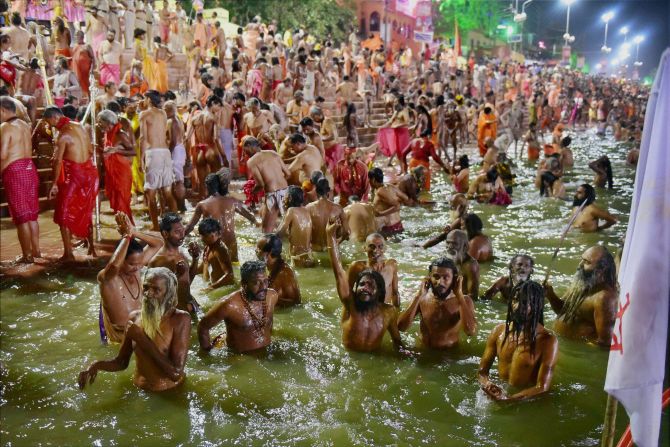 IMAGE: Naga sadhus take a dip in the Shipra river on the first Shahi Snan during the Simhastha Mahakumbh in Ujjain. Photograph: PTI

The VHP will focus on non-religious topics and give the Ram temple a miss at the three-day Vaicharik Kumbh, to be attended by Prime Minister Narendra Modi.
Shashikant Trivedi reports.

With the Vishwa Hindu Parishad dropping the idea of a 'Dharma Sansad' (religious parliament) at the Kumbh in Ujjain, the state government is gearing up for a three-day 'Vaicharik Kumbh' (May 12-14), which will focus on non-religious topics and give the Ram temple issue a miss.

Prime Minister Narendra Modi is expected to participate in the concluding ceremony of this Vaicharik Kumbh on May 14.

Instead of focusing on the Ram temple, more than 6,000 delegates from around the world will share their views on 'value- based life.'

When asked about the Ram temple, Chief Minister Shivraj Singh Chouhan evaded a direct reply and said the programme has 'value-based life' and the 'Krishi Kumbh' on its agenda.

A large number of those associated with the VHP and the Rashtriya Swayamsevak Sangh have visited the venue of the Kumbh, at Ninaura village, which falls on Ujjain-Dewas road.

"This time we are not organising 'Dharma Sansad,' but we will invite sants, sadhus and visionaries from across the globe to spread the message of Vasudhaiv Kutumbkam (The world is a family). Ayodhya and the Ram temple would not be a part of the agenda," said a VHP source.

Another source in the VHP said: "Religious leaders are expected to meet and discuss issues of various other matters, including the Ram temple in Ayodhya. But since there would be no 'Dharma Sansad,' it is difficult to guess what will actually be discussed."

BJP President Amit Shah is also expected to visit Ujjain for the Shahi Snan as well as review preparations at Ninnora.

Before the event got under way, authorities, private hoteliers, research scholars and hi-tech developers were expecting a total of 50 million devotees to throng Ujjain. Scorching temperatures, however, have ensured that that number is well below expectation.

"Security and other services were the priorities of the government and we have gone hi-tech to ensure that everything is in order," said Ravindra Pastor, commissioner of the revenue division and one of the key personnel earmarked to run the event.

The state has also developed two key mobile applications, 'Simhastha 2016' and 'Sarthi,' along with a dedicated web site and ensured visibility on Facebook and Twitter. Simhastha has been downloaded by 10,000 to 50,000 people, yet actual numbers on the ground remain slim.

"Complaints and requests can be registered and addressed on a real-time basis. There are six layers of administrative officers ready to address any devotee complaints," Mela officer Sujan Singh Rawat said.

Authorities here have been equipped with hi-tech devices and applications to manage a crowd of 10 million people at a time, spread across a sprawling 3,500 hectares.

The Ujjain Simhastha is one of the four legs of the Kumbh, each held on a rotation basis every 12 years. The other three being at Haridwar, Allahabad (Prayag) and Nashik.

Dips in the Shipra river during Simhastha are said to wash away all sins. April 22, May 9 and May 21 are three dates that have been marked for the holy dip or Shahi Snaan this year.

"We were more vigilant this time as women seers were also expected to take part. Our app even has an emergency button," said an official on condition of anonymity, "Traditionally, the Shaivas take the first dip, followed by Naga sadhus. They are followed by other hermits, monks, priests and devotees on foot. Thousands of devotees line both sides of the streets."

"The technology set-up has been put in force keeping all their needs in mind. Even the dustbins here have GPS," he added.

Asked how the authorities were planning to take care of people who come here minus mobile phones, Manish Vijayavargiya, an IT consultant to the Madhya Pradesh, said that the state police is always at hand to keep them safe. 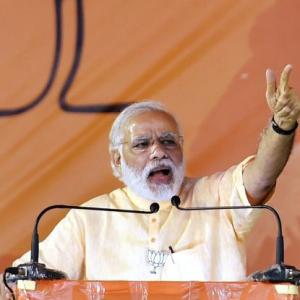