The bill was passed with 165 voting in favour and 7 against it. 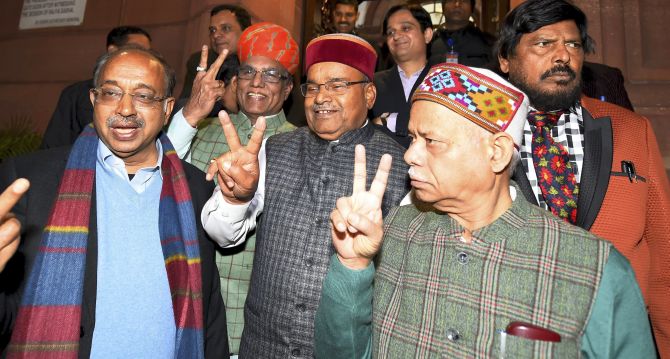 The Parliament on Wednesday approved amending the Constitution to provide 10 per cent reservation to general category poor in jobs and education.

A day after Lok Sabha approved The Constitution (One Hundred and Twenty Fourth Amendment) Bill, 2019, the Rajya Sabha passed the law with 165 voting in favour and 7 against.

In the last leg of the legislative process, the bill will now go to the President for approval. And once its gets his ascent, it will become the law that will give economically weaker sections in the general category 10 per cent reservation in education as well as central and state government jobs.

The bill was approved after the House rejected a motion moved by Dravida Munnetra Kazagham’s Kanimozhi and supported by Left parties for sending it to a parliamentary select committee for scrutiny. 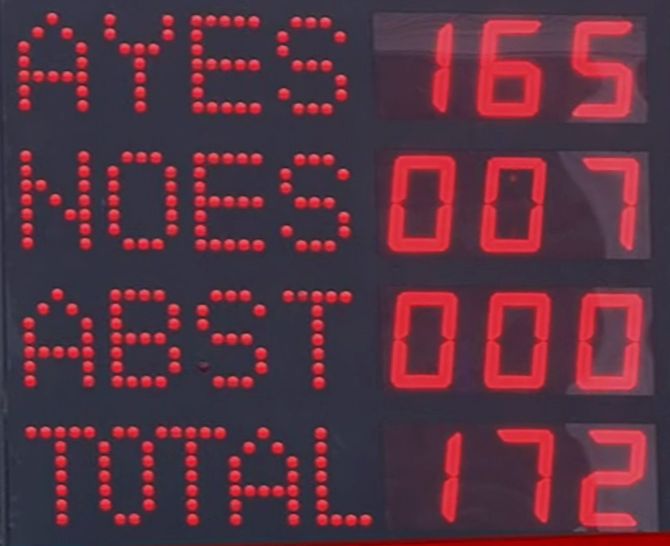 IMAGE: A screen displays the results of voting on the bill to provide 10 per cent reservation in jobs and educational institutions to economically backward section in the general category. Photograph: PTI Photo

Against 18 members supporting, 155 opposed it and one member abstained.

The bill was approved after the House rejected five amendments moved by Opposition members.

The quota will be over and above the existing 50 per cent reservation to Scheduled Castes, Scheduled Tribes and Other Backward Classes.

Replying to a nearly eight hour long debate in Rajya Sabha, Social Justice and Emowerment Minister Thaawar Chand Gehlot asked Congress how it would have implemented the promise it made in its election manifesto of giving reservation to poor of general category but by amending the Constitution.

He said reservation to SC, ST and OBCs will not be touched by the amendment and opposition parties should have supported the legislation without any ifs and buts.

The changes in the Constitution being made to provide the reservation will hold scrutiny of the Supreme Court, he hoped.

Filling up of jobs reserved for SC/STs and OBCs is an ongoing process, he said, adding the bill was an attempt to benefit poor of general category who have been deprived so far.

While opposition parties questioned the motive behind bringing the legislation just four months before the general elections, Law Minister Ravi Shankar Prasad used a cricketing analogy to justify the move saying ‘sixes are hit only in the slog overs’ and said more such “sixers” are in the pipeline.

Several opposition members raised doubts about the legality of the bill in view of the Supreme Court setting limit of quotas at 50 per cent.

Minister of State for Social Justice and Empowerment Ramdas Athawale said he saw nothing wrong in bringing a bill to win election.

Congress and other opposition parties also raised doubts over the move actually benefiting the deserving when, they said, government jobs are drying and the economy is witnessing a jobless growth.

Questioning the criteria defined to classify economically backward classes in general category as persons with annual family income of Rs 8 lakh when income tax exemption limit is only Rs 2.5 lakh, they also asked why in the four-and-half-years the Modi government did not bring the women’s reservation bill and one for reservation for SCs in promotion.

Satish Chandra Misra of the Bahujan Samaj Party said the bill was motivated by meeting of his party chief and Samajwadi Party head for a possible poll alliance in Uttar Pradesh, which sends most MPs in the Lok Sabha. 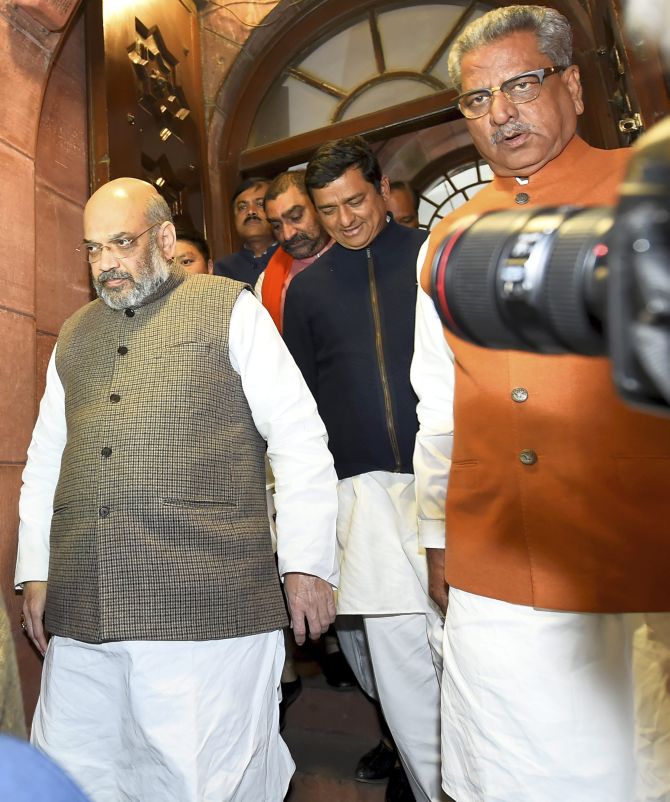 IMAGE: BJP President Amit Shah coming out after Rajya Sabha passes the reservation bill, which many are deeming a political masterstroke by the ruling party. Photograph: Kamal Singh/PTI Photo

The bill comes just four months ahead of Lok Sabha polls and weeks after the Bharatiya Janata Party faced the wrath of the upper castes especially in Madhya Pradesh and Rajasthan following its aggressive push to win over backward classes and Dalits, and is being seen as an attempt by the party to win over the upper castes.

The Constitution envisages quota for socially and educationally backward classes besides SC and STs, but has no mention of economically weaker section.

The amendment bill seeks to insert a clause in Sections 15 and 16 of the Constitution.

A Constitution amendment bill requires support from at least two-thirds of members present and voting in the both Houses of Parliament.

The Lok Sabha passed the bill with 323 voting in favour and three against.

To avoid the legislation being challenged in the Supreme Court, which had set 50 per cent as the upper limit for quotas, Consumer Affairs Minister Ram Vilas Paswan demanded that the amendment be included in the Schedule 9 of the Constitution. Reservation should also extend to private sector and constitution of an All India Judicial service, he said.

The Ninth Schedule to the Constitution was introduced to save land reforms law enacted by various states from being challenged in the courts to facilitate agrarian reforms.

Derek O’Brien of the Trinamool Congress charged the government of bringing “Cheat India” schemes in housing for all, two crore jobs, doubling of farm income and Rs 15 lakh for all citizens.

While Kapil Sibal of the Congress equated the law to the “disruptive” demonetisation, Nationalist Congress Party’s Praful Patel said it will deliver a “still born” baby.

BSP’s Mishra termed it as “fraud on the upper caste while Manoj Kumar Jha of the Rashtriya Janata Dal said it was “a midnight robbery”.

Mishra and Ram Gopal Yadav of the Samajwadi Party demanded reservation for Muslims. 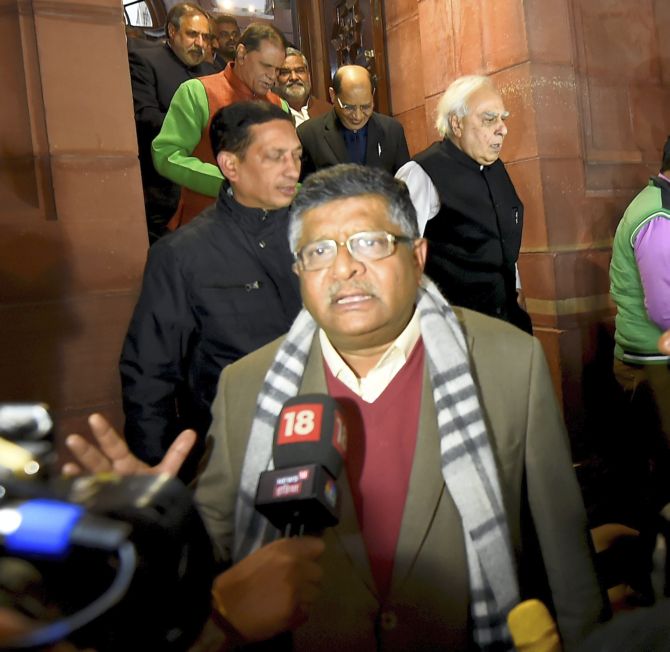 Amar Singh asked why people who are opposing the bill are voting in favour of it.

Prime Minister Narendra Modi described the passage of the quota bill as a victory of social justice and said it will ensure a wider canvas for the youth to showcase their prowess and contribute towards the country’s transformation.

“Delighted” over the passage of the Constitution (124th amendment) Bill, which amends the Constitution to provide 10 per cent reservation to general category poor in jobs and education, Modi said he was glad to see such widespread support for it.

“Passage of the constitution (One Hundred And Twenty-Fourth Amendment) Bill, 2019 in both Houses of Parliament is a victory for social justice. It ensures a wider canvas for our Yuva Shakti to showcase their prowess and contribute towards India's transformation,” Modi said in series of tweets.

He said the passage of the bill is a tribute to the makers of the Constitution and great freedom fighters, who envisioned an India that is strong and inclusive.

The house also witnessed a vibrant debate, where several members expressed their insightful opinions, he added.