Prime Minister Narendra Modi arrived in Colombo on Thursday on a two-day visit which is mainly aimed at reinforcing the traditional connect between India and Sri Lanka at a time when China is seeking to make inroads in the island nation. 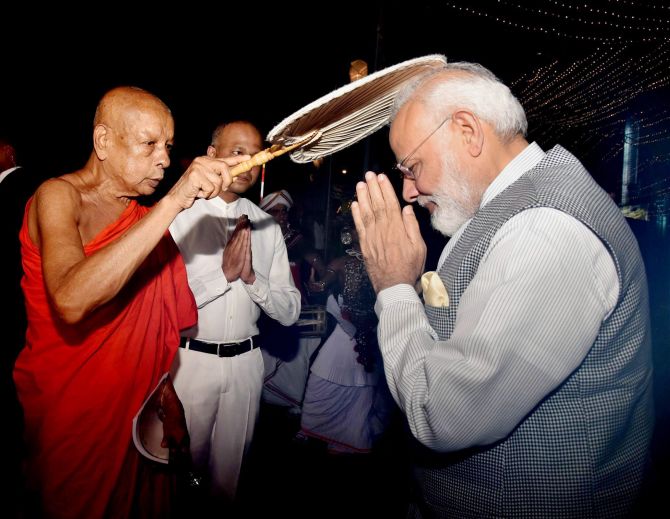 IMAGE: Prime Minister Narendra Modi being blessed by the priest at Seema Malaka Temple in Colombo on Thursday.

Modi, accompanied by Sri Lankan Prime Minister Ranil Wickremesinghe, prayed and offered flowers at the altar of the temple, which is a part of the more-than-120-year-old Gangaramaya Temple. 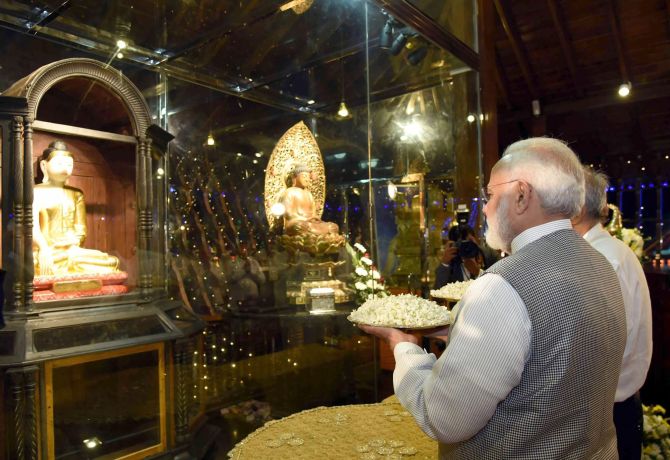 Modi entered the holy sanctum of the temple and lit lamps -- a traditional practice -- on the eve of the International Vesak Day celebrations, the biggest festival of Buddhists.

Modi and Wickramsinghe together pressed a switch to begin the lamp-lighting ceremony, which was characterised by brilliant multi-coloured lights and fireworks display.

The Gangaramaya Temple is situated in the bustling inner-city Colombo, nearby the scenic Beira Lake. The temple complex is a popular tourist attraction, a place of worship and a learning and vocational training centre. 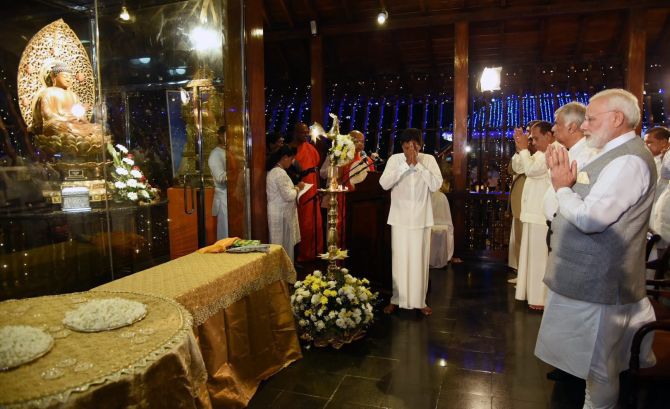 IMAGE: The PM's visit is mainly to re-emphasise the traditional connect between India and Sri Lanka, particularly in the context of Buddhism.

The temple’s architecture demonstrates an eclectic mix of Sri Lankan, Thai, Indian, and Chinese architecture and the temple is involved in welfare work. The temple is uniquely attractive and tolerant to congregation members of many different religions.

Earlier, Modi was received at the Colombo International Airport by Wickremesinghe and several senior ministers, including Foreign Minister Mangala Samaraweera.

Modi, on his second visit to Sri Lanka in two years, is in Colombo primarily to participate on Friday in the International Vesak Day celebrations. 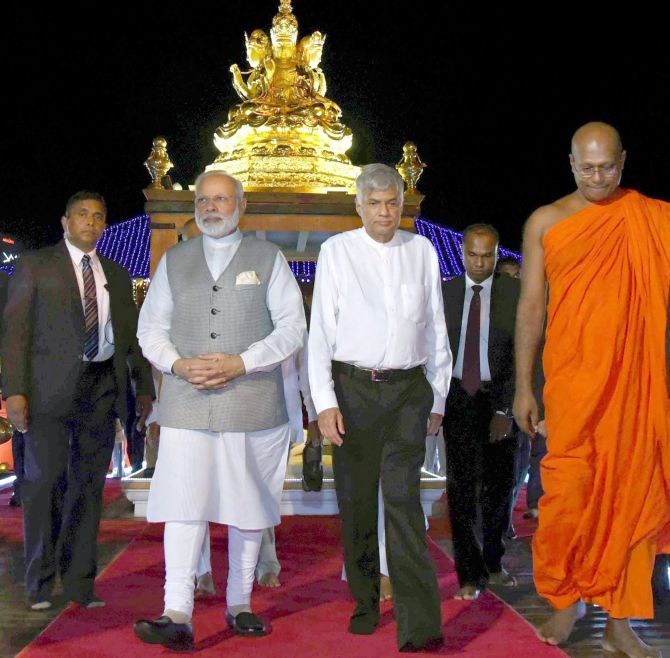 IMAGE: Modi and Wickramsinghe together pressed a switch to begin the lamp-lighting ceremony, which was characterised by brilliant multi-coloured lights and fireworks display.

He will inaugurate a hospital built with India’s assistance of Rs 150 crore.

He will also address the Indian-origin Tamils against the backdrop of India's insistence that Sri Lanka should undertake devolution of power to the ethnic community as part of the reconciliation process.

Modi was accorded a guard of honour by the Sri Lankan Air Force at the airport.

The visit and the agenda is mainly to re-emphasise the traditional connect between India and Sri Lanka, particularly in the context of Buddhism, which is a shared heritage.

This assumes significance since China is aggressively trying to make inroads in Sri Lanka.

China has already developed the Hambantota port in Sri Lanka and its submarines have been making port calls here, much to the discomfort of India. 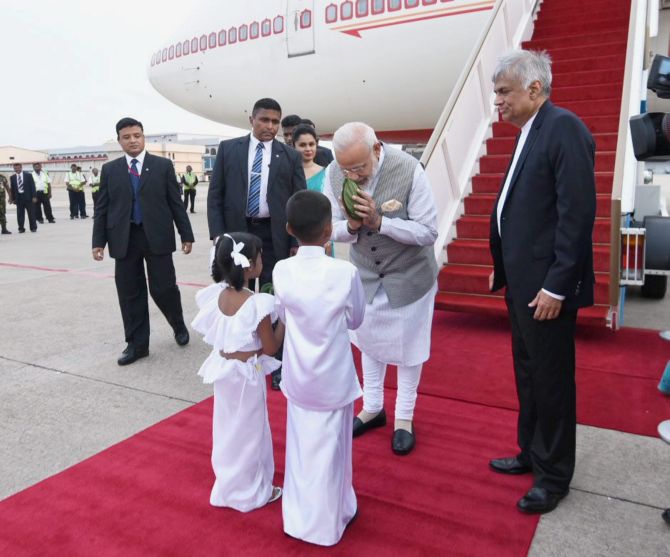 IMAGE: Modi being greeted by children as Wickremesinghe looks on at Bandaranaike International Airport in Colombo.

Prior to his departure from New Delhi, Modi said, ‘My visit brings to the fore one of the most abiding links between India and Sri Lanka -- the shared heritage of Buddhism.’

In a Facebook post, he said, ‘This will be my second bilateral visit there (to Sri Lanka) in two years, a sign of our strong relationship.’

During the visit, he said, “I will join the International Vesak Day celebrations in Colombo on 12th May, where I will interact with leading Buddhist spiritual leaders, scholars and theologians.”

He said it was an honour for him to join these celebrations with Sirisena and Wickremesinghe.

The prime minister recalled that during his last visit in 2015, he had the opportunity to visit Anuradhapura, a United National Educational, Scientific and Cultural Organisation world heritage site and a leading centre of Buddhism for centuries. 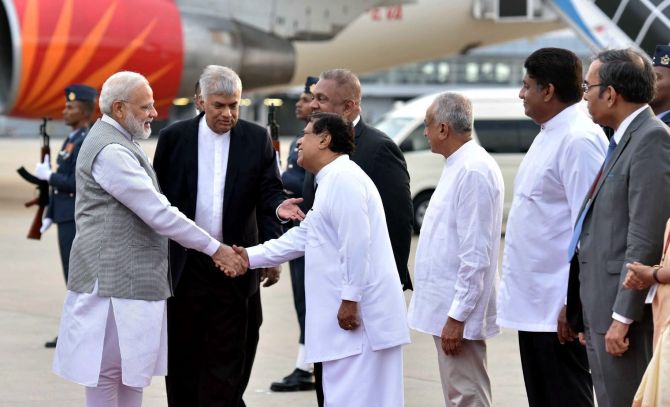 IMAGE:  Modi was received at the Colombo International Airport by Wickremesinghe and several senior ministers, including Foreign Minister Mangala Samaraweera.

“This time, I will be privileged to pay respect at the revered Sri Dalada Maligawa in Kandy, also known as the Temple of the Sacred Tooth Relic,” he said.

“I will also visit the up country region of Sri Lanka where I will inaugurate the Dickoya Hospital that has been built with Indian assistance, and have an interaction with the Indian-origin Tamil community,” Modi said.

Wickremesinghe was in New Delhi only a week ago when he held substantive talks with Modi. 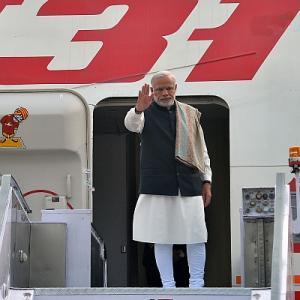