News
Business
Movies
Sports
Cricket
Get Ahead
Money Tips
Shopping
Sign in  |  Create a Rediffmail account
Rediff.com  » News » Modi in Israel is making all the waves

Modi in Israel is making all the waves

Before winding up his ‘historic and groundbreaking’ visit to Israel, Prime Minister Narendra Modi on Thursday visited the Indian cemetery at Haifa and then enjoyed a stroll on Olga beach with his ‘good friend’ Israel Prime Minister Benjamin Netanyahu.

Here are the best scenes on Day 3 of the PM’s visit. 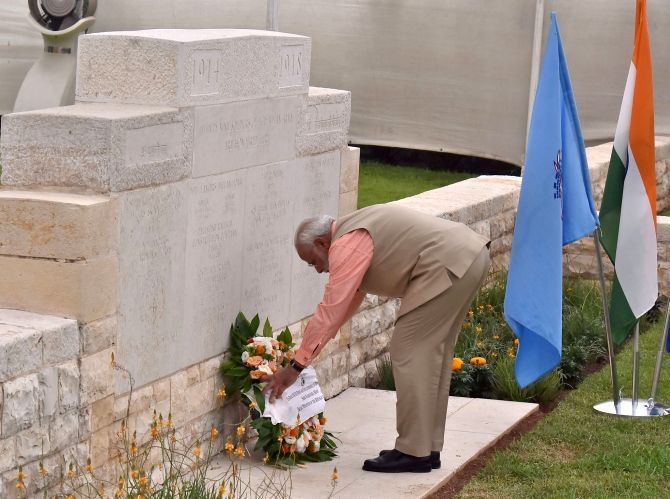 Prime Minister Narendra Modi pays tribute to the Indian soldiers who laid down their lives during the World War I while protecting the Israeli city of Haifa from the Ottoman Empire forces and said the sacrifices made by them is a mark of enduring bond between the two nations. Modi visited the Indian cemetery at Haifa along with his Israeli counterpart Benjamin Netanyahu on the last day of his visit. Photograph: Press Information Bureau 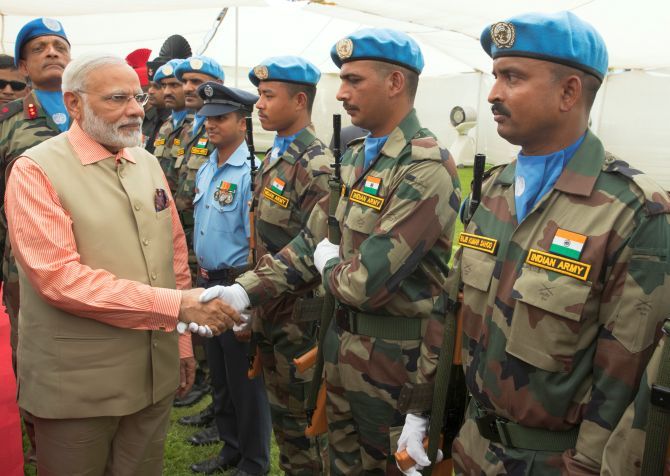 Modi also met members of the Indian contingent of United Nations Interim Force in Lebanon at the cemetery and lauded their work. While signing the visitor's book, the PM wrote, ""I am deeply honoured to stand here today to salute the valiant Indian soldiers, who led down their lives for the liberation of Haifa during the WW I." Photograph: Jack Guez/Pool/Reuters 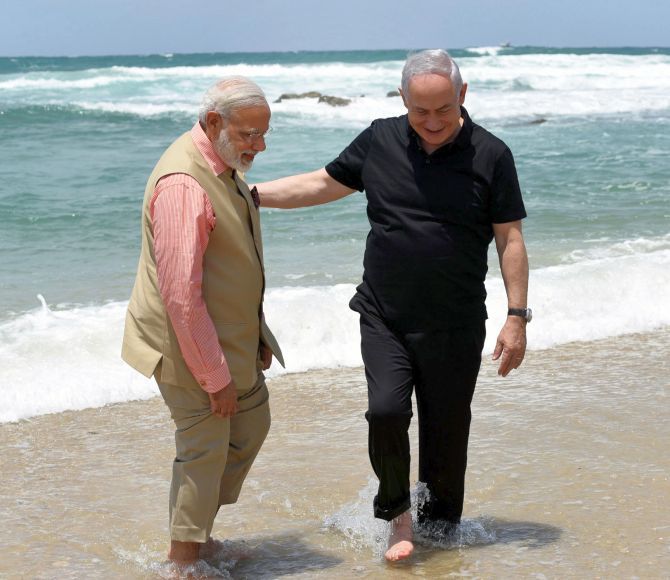 From Haifa, the two world leaders -- NaMo and 'Bibi -- made their way to Olga beach where they opened their shoes, pulled up their trousers above the ankles, and enjoyed a lazy walk in the waters after two days of serious work of upgrading bilateral ties. Photograph: Press Information Bureau 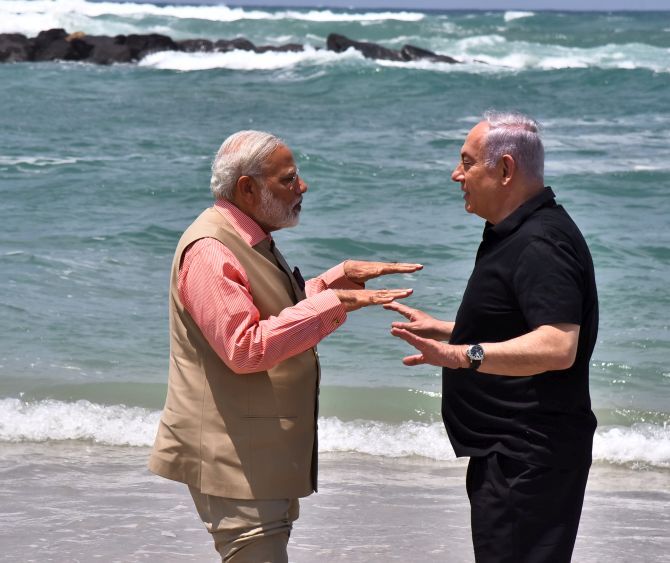 Both Modi Netanyahu are seen enjoying the light breeze blowing over the picturesque blue waters. Do we smell a bromance between the two? Photograph: MEAIndia/Flickr 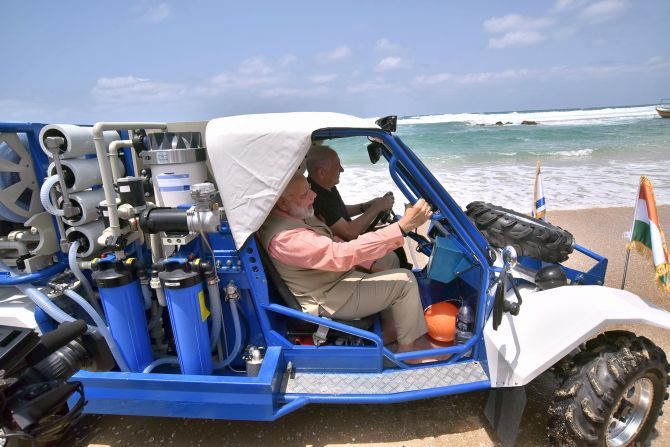 Netanyahu took Modi on drive on board the Gal-Mobile water desalination unit on Olga beach. The Gal-Mobile is an independent, integrated water purification vehicle, designed to produce high-quality drinking water. It can be useful in natural disasters like floods, earthquakes, military use in difficult terrain and rural areas to provide drinkable water. Photograph: MEAIndia/Flickr 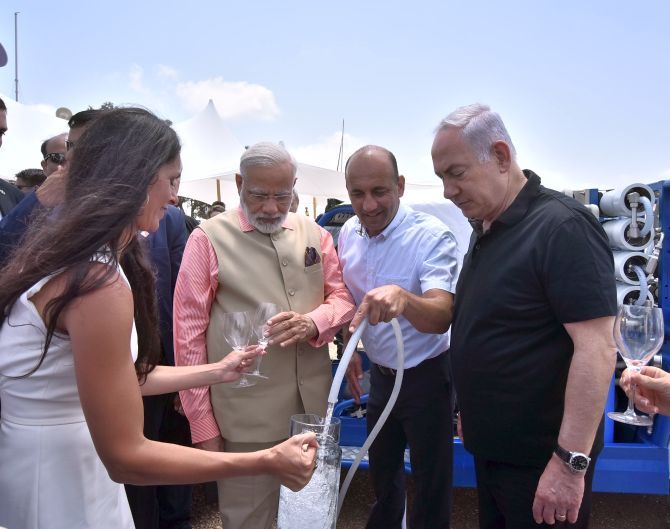 Modi also enjoyed a tasting of the water from the desalination unit along with his Israeli counterpart. Photograph: MEAIndia/Flickr 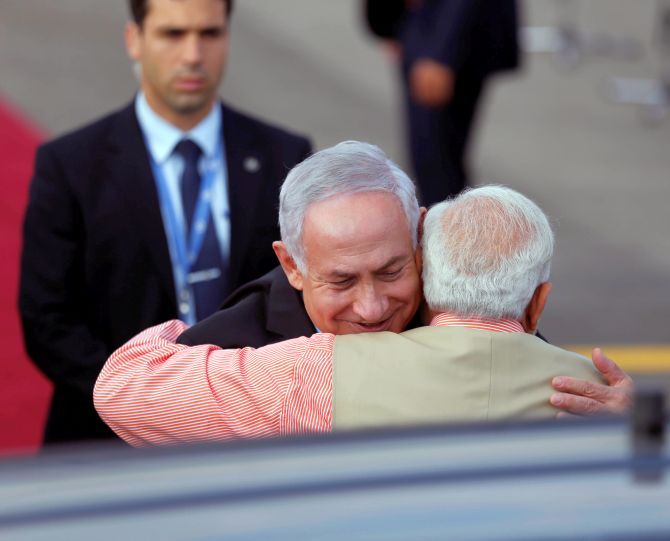 Modi and Netanyahu's camaraderie created waves online with many discussing their "budding bromance". The Israeli premier accompanied Modi almost like a shadow since Modi landed here on the first visit by an Indian premier to the Jewish state, with both of them hugging each other at every possible opportunity. Photograph: Amir Cohen/Reuters 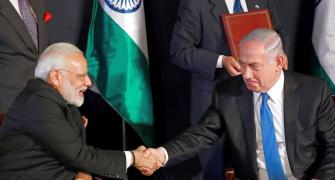 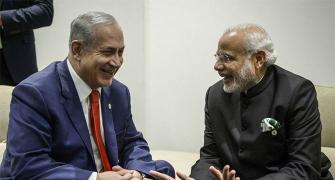 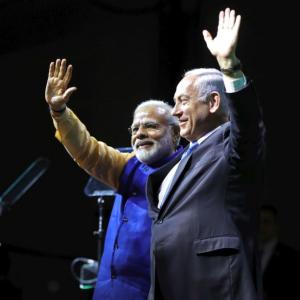 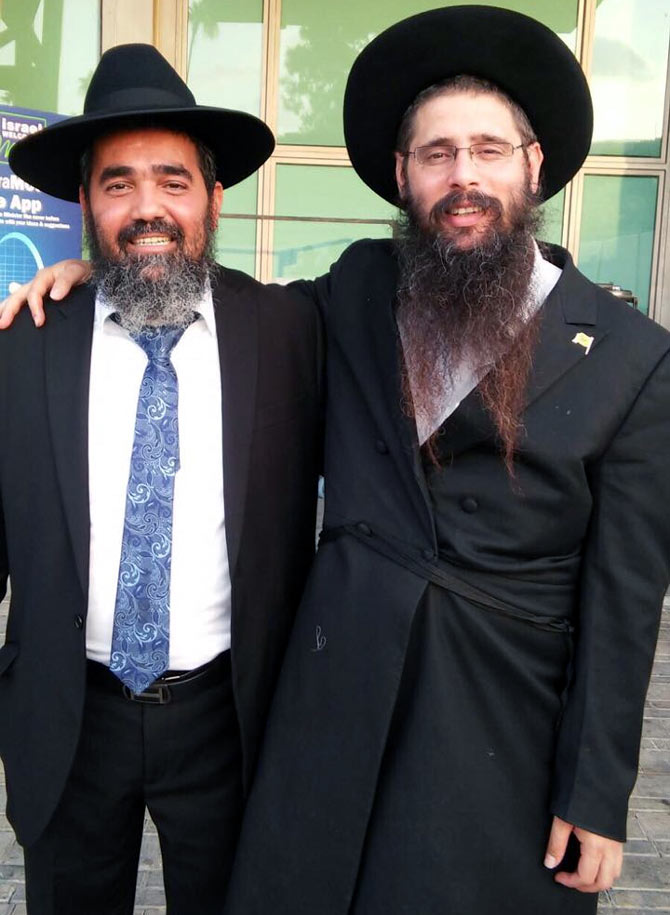